We all knew Raspberry Pi Compute Module 3 were about to be launched soon, as the Raspberry Pi foundation announced a partnership with NEC displays last October, and the datasheet for two version of the Broadcom BCM2837 based system-on-module, CM3 and CM3L (Light), was released shortly after. The good news is that the modules have officially been launched for $30 and $25 for respectively Compute Module 3 with 4GB flash, and Compute Module 3 Light with the SD card signals exposed via the SO-DIMM connector. The foundation has also lowered the original compute module price to $25. 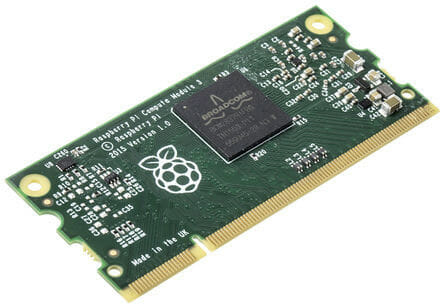 Here are Compute Module 3 specifications as a reminder:

The module is mostly electrically & mechanically backward compatible with the original Compute Module, and benefits from the software running on Raspberry Pi 3 board. You’ll find specific documentation here. 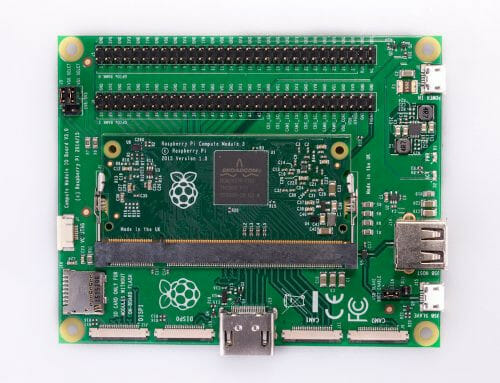 In order to get started quickly, a Raspberry Pi Compute Module 3 devkit is also offered with a CM3 module and a “Compute Module IO V3” baseboard exposing GPIO headers, an HDMI port, a USB port, a micro SD slot, and more.

Raspberry Pi Compute Modules CM3 and CM3L, as well as the development kit (~$150), can be purchased on RS Components and element14.

Hello, I have the old compute module for raspberry pi 1.

And I would like to know if the cm3 is compatible with the base board of the raspberry pi 1.

Do you know anything about it ?.

@Fran That’s the difference between the two modules: Apart from the CPU upgrade and increase in RAM the other significant hardware differences to be aware of are that CM3 has grown from 30mm to 31mm in height, the VBAT supply can now draw significantly more power under heavy CPU load, and the HDMI HPD N 1V8 (GPIO46 1V8 on CM1) and EMMC EN N 1V8 (GPIO47 1V8 on CM1) are now driven from an IO expander rather than the processor. If a designer of a CM1 product has a suitably specified VBAT, can accommodate the extra 1mm module height increase… Read more »

“CM3 and CM3L are priced at $30 and $25 respectively (excluding tax and shipping), and this price applies to any size order. The original Compute Module is also reduced to $25. Our partners RS and Premier Farnell are also providing full development kits, which include all you need to get started designing with the Compute Module 3.”

No use , You cant buy the chip separately , no commercial product is possible with this chip… its made exclusively for raspberry foundation …. so better go with AM335X or i.MX processor … if cost matters go with allwinner …

@varghese
The goal with this is to let people do their own baseboard and purchase the Compute Module 3.
You can make a product with that and sell it in quantities, just like NEC Displays will do.
That’s right that you can’t purchase the processor directly and use RPI firmware with it without breaching the license though. If you use CM3 / CM3L modules however, there’s no such issue.

You do have the prices the wrong way round:

“Compute Module 3 Light with a micro SD slot” is misleading, the SD slot seems to be on the external devboard rather than the module as indicated in the specs further down.

So where is a sub-$20 A64 module with 1GB RAM and eMMC? Make it pin compatible and share the baseboards since there will likely be a lot of cluster hardware designed for this module.

@Jean-Luc Aufranc (CNXSoft)
The general consensus is that if you adhered to the specs set aside for a CM1, with the provisos about power profile (it’s a bit beefier than the CM1’s TDP, obviously…), it would be likely to drop right in and go.

You’re probably looking at a 95-98% chance of most of the CM1 projects just accepting the thing right out of box as long as the designer of the custom carrier dock didn’t cut corners on things.

@Jean-Luc Aufranc (CNXSoft) Base firmware is open source now. You only have a few licensed items (The VP4 codecs for MPEG2, etc.) being in question there. Simply put, it’s a sourcing problem- you’d need to be a **BIG** player (maybe my prior client…but with them not having their act together…) to get Broadcom to give you the time of day for those parts… And, no, they’re not made specifically for the Pi Foundation…they’re just making a LOT of them where they’d not just for them. There’s a difference. I’d rather leverage their market lifespan guarantee (Market endurance is going to… Read more »

@Nobody of Import
You can source the chip in China, maybe not just in very large quantities. The problem is with the license, even if it is open source, you can’t use the bootloader developed for Raspberry Pi on your own hardware. It can only be used on Raspberry Pi boards and compute modules.
See http://www.cnx-software.com/2016/07/19/raspberry-pi-bootloader-license-preludes-it-to-run-on-competing-broadcom-bcm283x-boards/

@Jon Smirl
No quite what you want, but SOPINE A64 with Allwinner A64 + 2GB RAM + micro SD (eMMC signals via SO-DIMM connector exposed) has launched -> http://www.cnx-software.com/2017/01/17/pine64-introduces-sopine-a64-allwinner-a64-som-and-sopine-model-a-baseboard/

@Jon Smirl Why would anyone else follow the connector specs of these boring Broadcom SoCs? Still the only ‘highspeed’ connection to the outside is one USB 2.0 OTG. So when you make an A64 SoM compatible to this connector spec you loose one of A64’s USB 2.0 ports and more importantly RGMII to connect to a Gigabit Ethernet PHY. A cluster design based on this SoM specification would be pretty lame. Pine Inc folks with their own SoPine already plan for a cluster board that contains an own switch IC combined with RTL8211E PHYs so at least the SoMs can… Read more »

Confirmed. The CM3 is compatible with the CM1 motherboard.