We’ve covered several board and modules based on Xilinx Zynq Ultrascale+ MPSoC such as the AXIOM Board and Trenz TE0808 SoM, both featuring ZU9EG MPSoC, with systems selling for several thousands dollars. But I’ve been informed you may not need to purchase a board to use Virtex UltraScale+ FPGAs, which are different from Zynq UltraScale+ since they lack the ARM CPU & GPU and normally feature a more capable FPGA, as last November, Amazon launched a developer preview of F1 instances giving access to this type of hardware from their cloud. 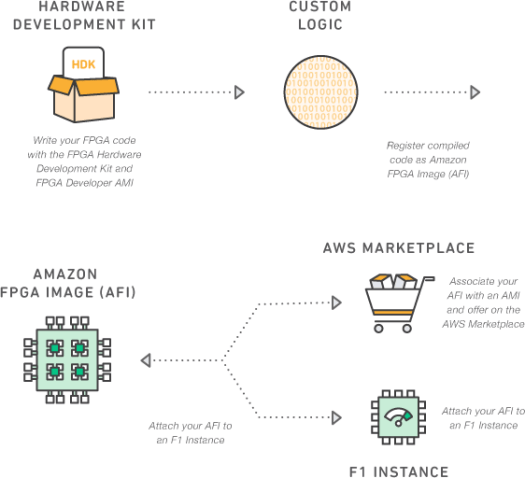 That’s the FPGA hardware you’ll be able to access from one F1 instance:

I understand those FPGA boards are PCIe card plugged into servers with an Intel Broadwell E5 2686 v4 processor, up to 976 GB of memory, and up to 4 TB of NVMe SSD storage. This is obviously only usable if the FPGA do not need extra hardware connected to the board.

You can choose from two instance types as described in the table below.

Amazon provides an hardware development kit or FPGA Developer AMI (Amazon Instance), where developers write and debug FPGA code on their own hardware/instance, before creating an “Amazon FPGA image” (AFI), and attaching it to an F1 instance as describe in the first diagram of this post. If you’re a customer who needs a specific “acceleration routine”, you don’t even need the FPGA development kit, as you can purchase the AFI on the market place, and deploy it on F1 instances.

If you are interested in Amazon solution and want to know more and get started, Amazon organized a one hour webinar last December.

AFAIK, Amazon has still not officially launched F1 instances commercially, at which point you’ll be able to pay by the hour for the use of the instance, but you can still sign up for the F1 preview.

@tkaiser
The big difference though is that Microsoft is using this internally, while Amazon offers a service.

@Jean-Luc Aufranc (CNXSoft)
Sure, was more about the potential and use cases of FPGAs in general since some of your readers just recently compared prices of Xilinx SoCs with Raspberries (without comparing features and solely focusing on CPU cores)

@tkaiser
I see 🙂 Talking about price, the FPGA used by Amazon are really high-end. I’ve checked the price for some of the UltraScale+ VU9P FPGAs and the only one I’ve managed to get a price for costs about $50,000.