Smartphones allow you to zoom in when taking a picture, but most of the time it’s achieved using a software based digital zoom, and quality suffers greatly as a results. Oppo has however designed a new smartphone camera module with a 3x optical zoom, and “image fusion” technology to bring the level of “lossless” zoom to 5 times. Some phones such as Asus Zenfone Zoom come with a 3x optical zoom, and you can purchase detachable zoom for your smartphone, but none of those are as quite as compact as Oppo solution, which from the outside looks like a standard dual camera since it’s so thin (5.7 mm). 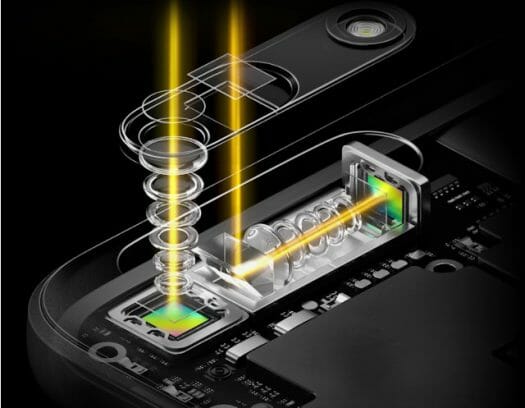 They’ve managed to keep the module compact by designing a periscope-style structure that divert light through a prism and into a telephoto lens nested inside the smartphone, set at a 90° angle to a rear-facing wide-angle lens.

The camera also comes with an “all-new optical image stabilization” in order to shoot clear pictures even when in motion, as vibrations are an even large effect when the zoom is active. Oppo OIS solution is said to improve the compensation by 40% compared to previous generation cameras. The prism is also part of the stabilization as it can adjust its angle by 0.0025° increments.

OPPO has introduced the camera module at Mobile World Congress 2017, but did not announce any phone with the module, nor mention when we can expect the camera to be found in consumer devices.

Maybe we finally get a replacement for the Oppo Find7

works as intended, only con is the rather slow min-max aperture