Do you member Rockchip & Intel partnership about “SoFia” SoC for smartphones? It did not pan out so well, and but Intel has apparently not given up on the idea of partnering with Chinese companies to design and launch Intel based smartphone application processors, as Speadtrum has just announced SC9861G-IA octa-core Intel Airmont processor @ up to 2.0 GHz with an LTE Cat. 7  modem, and manufactured using Intel’s 14nm process technology. 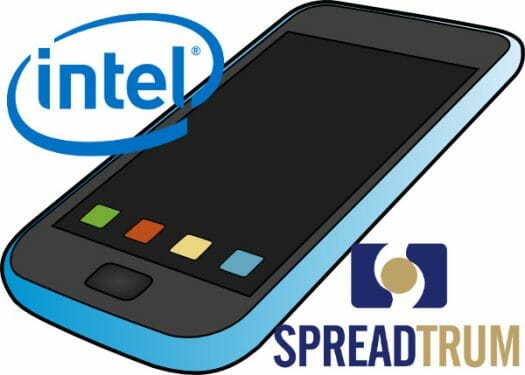 The Airmont architecture is also found in Intel’s own Cherry Trail and Braswell SoCs designed for respectively tablets and mini PCs, so they must have found some further power efficiencies in order to use it in a smartphone, and used some of technology developed for Intel canceled projects. SC9861G-IA withh support 5-mode full-band LTE (TDD-LTE / FDD-LTE / TD-SCDMA / WCDMA / EGG) Cat 7. as well as Carrier Aggregation and TDD/FDD hybrid networking, allowing for peak data transmission rate of 300 Mbps downlink and 100 Mbps uplink.

Other features of the SoC include support for dual cameras up to 26 megapixels with real-time rear/front camera capture/recording, up to 4K2K H.265 video recording, as well as displays up to 2560×1600 resolution. The SoC is also equipped with an Imagination PowerVR GT7200 GPU, an integrated sensor hub, and Intel Virtualization Technology to support a multi-domain security system architecture and provide security..

Spreadtrum SC9861G-IA is scheduled for mass production in Q2 2017, and targets the mid range and premium smartphones.

Intel literally couldn’t give these away. Nice to see that it’s still trying.

@nutjob2
Actually it wouldn’t have been bad if only it had an Intel GPU and not that damn PowerVR.

I was dumbfounded by Intel’s lack of support for Android on its processors back when it was trying to gain a foothold against ARM, I’d have thought they’d make software support a high priority. Now that they’ve lost, the likelihood of the support improving is pretty much zero so… no thanks.