NXP Kinetis K27/K28 MCU family is based on an ARM Cortex-M4 core clocked at up to 150 MHz with FPU,and includes up to 1MB embedded SRAM, 2MB flash, and especially target portable display applications. 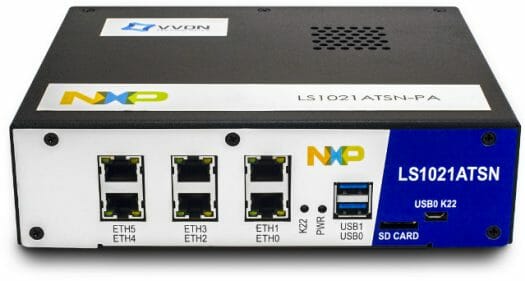 It’s unclear when LS1028A will become available, but it will be available for 15 years after launch, and you’ll find a few more details on the product page. You could also visit NXP’s booth (4A-220) at Embedded World 2017 to the reference design in action.

The last announcement will not really be news to regular readers of CNX Software, since we covered i.MX 8X processors last year using an NXP presentation. As previously known, i.MX 8X family comes with two to four 64-bit ARMv8-A Cortex-A35 cores, as well as a Cortex-M4F core, a Tensilica HiFi 4 DSP, Vivante hardware accelerated graphics and video engines, advanced image processing, advanced SafeAssure display controller, LPDDR4 and DDR3L memory support, and set of peripherals. The processor have been designed to drive up to three simultaneous displays (2x 1080p screens and one parallel WVGA display), and three models have been announced:

The processors are expected to be used in automotive applications such as  infotainment and cluster, industrial control and vehicles, robotics, healthcare, mobile payments, handheld devices, and so on.

The i.MX 8QuadXPlus and 8DualXPlus application processors will sample in Q3 2017 to selected partners. More details may be found on NXP i.MX8X product page.

I assume the LS1028A doesn’t any SATA? If it did, I know a ton of people would would be interesed in it:
ARMv8, multiple ethernet ports, USB3, etc.

Thank you, Philipp. I couldn’t see any in the spec.

I did see that the i.MX 8X chip had one PCI-E lane. That chip is going to be pretty expensive due to the extra stuff on there (DSP, GPU, video end/dec).