I wrote about SupTronics expansion boards for Raspberry Pi a few year ago. Those add features like WiFi, Bluetooth, RTC, SATA, VGA, S/PDIF, etc… I’ve just stumble upon a new model Suptronics X800 specifically designed for 2.5″ SATA hard drive and SSDs that I found on DealExtreme for $32.73 with a 5V/4A power supply, or $21.43 with just the expansion board and accessories.

X800 HDD Expansion Board ships with a power connection wire, 4x M2.5 spacers, 4x M3 spacers, 8x M2.5 screws, 8x M3 screws, and 4x M3 screw nuts, as well as an optional 5V/4A power supply. Once you have assembled everything together it looks like the pictures below. 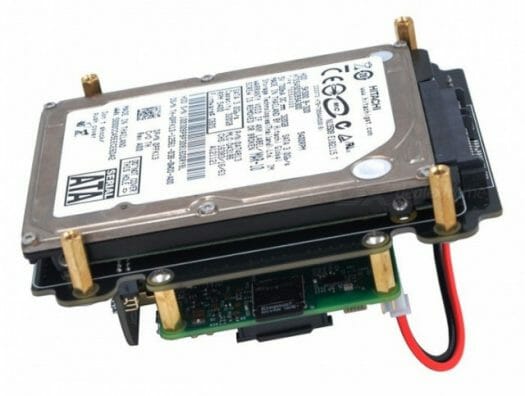 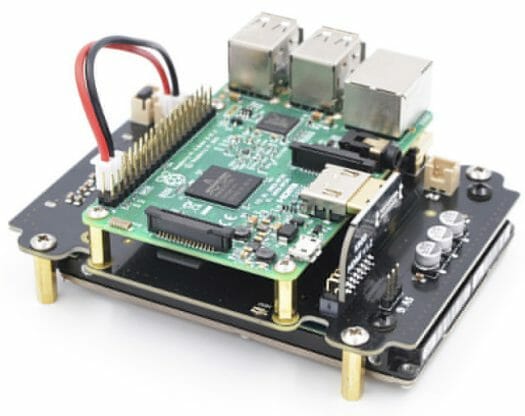 It’s more compact than a solution using a Raspberry Pi board with an external USB hard drive, but you may prefer getting a case for your Raspberry Pi and its hard drive, and it turns out SupTronics has a bunch of those either for 2.5″ SATA drives, or mSATA drive, with or without stereo to 7.1 audio DACs via their X-Series DIY kits. 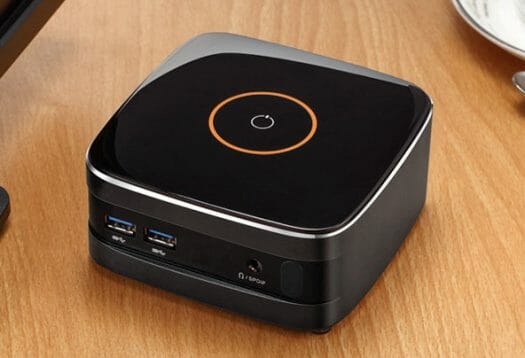 The prettiest enclosure comes with their X3000 kits. Made of aluminum allow, it supports mSATA drives up to 1TB, comes with a built-in IR sensor, a touch button for power, a micro USB OTG port to access SATA from a computer, but sadly exposes a mini HDMI instead of a standard HDMI port.

If you prefer a Raspberry Pi case for 2.5″ SATA drives, you’ll have to select a less pretty “black brick” such as their X1000K model.

One interesting features is the port on the rear panel – which looks like a parallel printer port – and can be used to access Raspberry Pi GPIOs signal using an add-on board part of the kit.

SupTronics X3000 launched last year for around $100 with Raspberry Pi, and it may priced itself out, as none of the stores are selling it anymore. X1000K mini PC kit is still for sale for about $80 and up on DealExtreme, Banggood and Aliexpress.

SupTronics X800 board features GL830 which is a clear do not buy indicator. This is probably the worst USB-to-SATA bridge ever manufactured. Sequential transfer speeds are limited to ~15MB/s write and ~30MB/s read (good bridges exceed 36MB/s in both directions and really good ones with UAS support even 40MB/s) and FreeBSD dev Jared McNeill discovered also that the implementation is broken since reports 4 sectors less than it should: https://irclog.whitequark.org/linux-sunxi/2016-06-27#16843360; (so if you love data corruption in special situations this is exactly your device 😛 ) Why on earth do hardware vendors still use this buggy and slow GL830 thingie… Read more »

>Why on earth do hardware vendors still use this buggy and slow GL830 thingie to implement SATA access for USB devices?

which chip do you recommend instead?

Has anyone tried a VIA Lab’s VL715 in Linux?

BTW how fast is ethernet over hdmi on the pi3?

The Raspberry toys have no real Ethernet capabilities. Their SoC’s single USB2 OTG port connects on the larger models to either LAN9512 or LAN9514 integrated USB hub (3 or 5 ports with an integrated low power Fast Ethernet USB adapter internally connected). So LAN951x’s integrated USB-Ethernet adapter is wired to the Ethernet jack but there’s no physical connection to the HDMI port. On the Raspberries lacking LAN951x HDMI-Ethernet-Channel (HEC) is obviously not possible too since this outdated SoC never had Ethernet integrated.

Benjamin : Because it’s cheap. Hardware vendors LOVE cheap stuff. True, but this crappy IC is not only slow as hell but it is broken. I rembered that I have one board lying around using this horrible GL830 onboard to provide pseudo SATA. Banana Pi M3 running my very own semi Armbian I baked one year ago. This is a Samsung SSD behind a quality SATA bridge (JMS567): (parted) p Model: ADplus SuperVer (scsi) Disk /dev/sdb: 234441648s Sector size (logical/physical): 512B/512B Partition Table: gpt Disk Flags: Number Start End Size File system Name Flags 1 2048s 234440703s 234438656s ext4 primary… Read more »

I really wish this site had a forum where we could have things like tkaiser’s patented “list of USB devices that don’t suck” (seriously).

sandbender :
I really wish this site had a forum where we could have things like tkaiser’s patented “list of USB devices that don’t suck” (seriously).

Tkaiser, is it possible to make also a list on the sata page of the sunxi wiki with good sata multiplier chips.

roel :
Tkaiser, is it possible to make also a list on the sata page of the sunxi wiki with good sata multiplier chips.

Nope, since Allwinner’s SATA implementation is way too limited (very low sequential write speeds, random IO also horribly low, supports only CBS but not FIS-based switching which will destroy random IO performance even more). I also fail to see any use case for PMs with cheap SBC, at least playing RAID would be insane: http://linux-sunxi.org/SATA#Caveats

I have been emailing with the Subtronics people and pointed out your comment so they said they will redesign their planned mSATA product to use JMS578 because of your comment. It was not clear if they also plan to redesign X800 board too; I guess it depends on how many they have left on the shelf to sell.

But, great to see such quick correction, no?

Mike Schinkel : But, great to see such quick correction, no? Absolutely. I really hope we see no more GL830 in products built these days (since it’s not just slow but broken) and would think exchanging that with any more recent bridge chips might just add $1 to $1.50 to BOM. And JMS578 is a good choice for an mSATA product since it also support TRIM (though no idea about driver support with Raspberries, I will do some tests in April with mainline kernel and Allwinner hardware and report back, maybe CNX collects some available information for an ‘SBC and… Read more »

I just stumbled on this post after I ordered an X5000Kit (http://www.suptronics.com/miniPCkits/x5000k.html). I am only planning to us it with Rune Audio or Volumio to listen to my FLAC music collection. Do you thin the X800’s GL830 will cause problems in my usage? It will only be reading from the HDD 99% of the time (and it’s a 1TB 5400 HDD).

@Nostromo
If you are just going to listen to FLAC audio from your hard drive, you don’t really need to care about performance. GL830 should not be an issue, just make sure you hard drive is not full.

@Jean-Luc Aufranc (CNXSoft)
Thank you for the reply! The hdd is about 60% full so no problem there.

@Nostromo
The last 4 sectors are missing so based on how you partitioned the disk it can be something between ‘no problem’ and error messages or real problems (see the GPT partition table errors above). If you use buggy silicon I would re-partition the disk after connecting to the buggy GL830 and then restore your files from backup (you have a backup, right?)

Thank you for the advice tkaiser. I haven’t actually received the X5000 yet so once I do and start setting it up what file system would you suggest I use? I think I have it as FAT32 now but maybe ext4 would be “safer”? Rune can actually read NTFS, FAT32, and ext3/4. Is there a safest format for the GL830 or is just using the GL830 to format the disk the most important step?

@Marc
Simply attach it and check vendor/product id by using lsusb (on Debian derivates part of ‘usbutils’ package you may need to install) or dmesg output: