MiQi is an upcoming low cost development board powered by Rockchip RK3288 SoC that will sell for $35 with 1GB RAM and 8GB storage, and $69 for the version with a  2GB / 32GB combination. Since Rockchip RK3288 was launched in 2014, most available benchmarks were made on Android 4.4, and since MiQi is the first low cost board based on the processor, other RK3288 based board such as FireFly have not been that popular. So I’ve decided to run updated benchmarks in MiQi both in Android 5.1 and Linux (Lubuntu 14.04), which was easy since a dual boot image is pre-installed. But since I received an early sample without heatsink, I found a spare heatsink added some thermal paste and placed it on top of the processor and partially on RAM and eMMC flash. 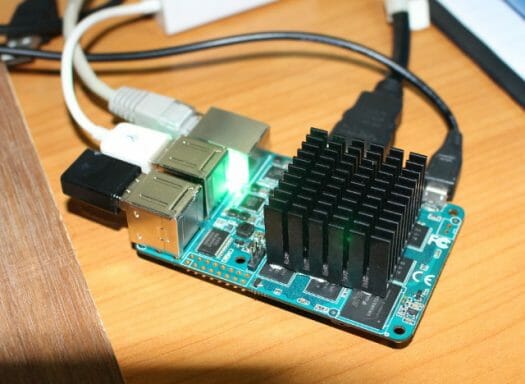 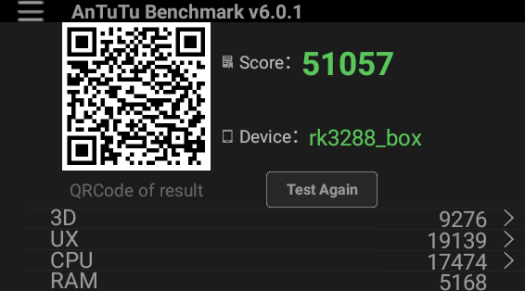 You can get the full details about the score here. 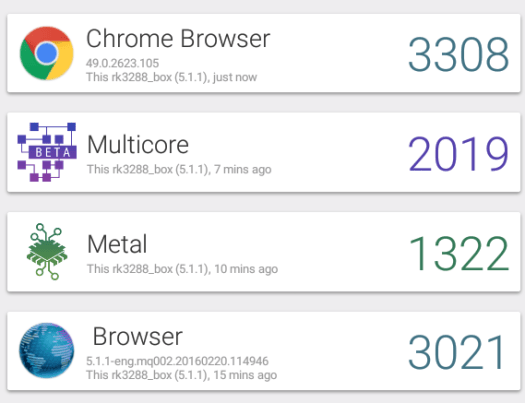 It’s not quite as fast as Xiaomi Mi Box 3 Enhanced, but still offers superior performance (orange bars) compared to most Android TV boxes on the market. 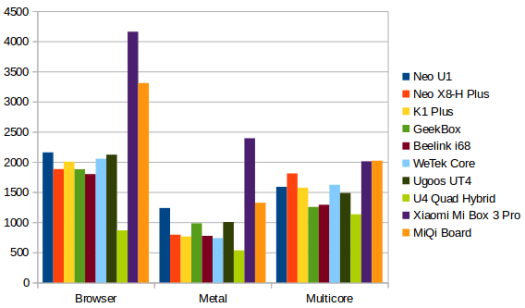 I’ve installed Phoronix, and repeated the benchmarks run recently on some other developer platforms such as Orange Pi boards, Banana Pi Boards, Raspberry Pi 3, ODROID-C2, ODROID-XU4, and so on.

Let’s have a closer look at a couple of benchmarks. 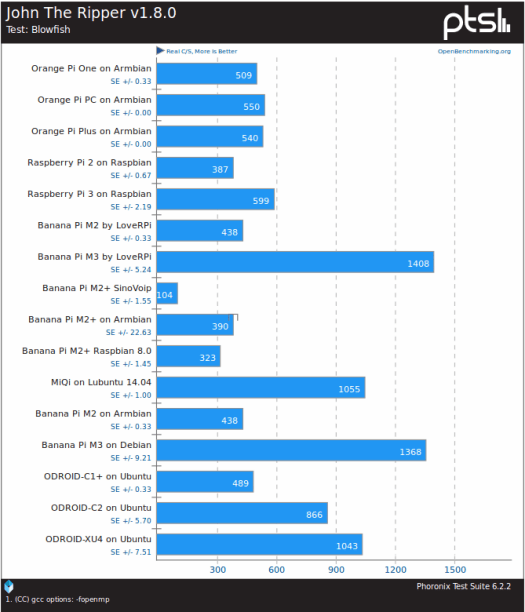 John the Ripper is a password cracker benchmark that makes good of all available cores, and while octa-core boards like ODROID-XU4 and Banana Pi M3 do great, MiQi somehow edges out ODROID-XU4 board. 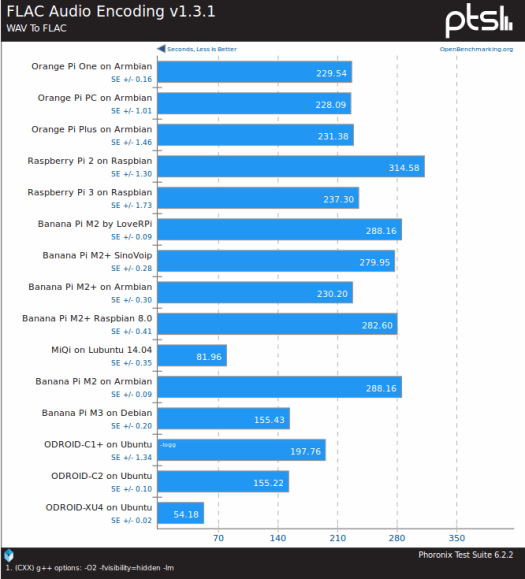 FLAC audio encoding is mostly a single thread benchmark, and here ODROID-XU4 does best, followed closely by MiQi board. The diffference with

The results are mostly in line with what to expect in theory, but bear in mind that while Android benchmarks are rather short, and most of the time cooling is not that much of an issue, Phoronix Test Suite benchmarks in Linux may take around one hour to complete, and the heatsink got really hot at some stage (67 degree with IR thermometer) and too hot to leave the fingers on it for more than a few seconds, so it’s quite possible that adding an fan to the heatsink may have yielded slightly better results in some cases.

what’s the state of linux on that chip, specifically gpu drivers and hw video decoding ?

i’m still not seeing any native linux drivers and a lot of Libhybris stuff.
I have no experience with Libhybris, is it stable ? (found the answer and doesn’t look like it is anywhere as good as native drivers).

can you do a I/O test for the emmc-flash?

Oops, the single-threaded performance is somewhat impressive. Do you have the chance to test GbE Ethernet throughput (iperf and if possible also nuttcp)?

(to be able to compare with Armbian’s collective storage benchmarking)

BTW: iozone should be one ‘apt-get install iozone3’ away in Lubuntu. If not present in the repos… I built a package ready for ‘dpkg -i’ years ago for (L)ubuntu/Debian running on ARMv7: http://kaiser-edv.de/downloads/iozone3_397-2ubuntu1_armhf.deb

@tkaiser
I normally use Bonnie++ which provides both seq and random I/Os. I’ve put the board aside for now, so it will have to be a little later.

@Jean-Luc Aufranc (CNXSoft)
Bonnie(++) measures $something but never that what it’s supposed to: http://www.brendangregg.com/ActiveBenchmarking/bonnie++.html (please read at least the conclusion to realize what’s wrong with it)

@Jean-Luc Aufranc (CNXSoft)
Thx for the iperf/iozone numbers. They were done with the 8GB eMMC, right? Since then 32GB should be faster especially when using smaller (random) writes 🙂

If the board can be powered also reliably by avoiding the crappy Micro USB connector (GPIOs for DC/IN?) then it looks really interesting especially since upstream software support seems also progressing…

putting ‘IC’ into that 1688 query made them appear. Without ‘ic’ they get lost in too many STBs and are hard to locate. That is good trick.

I’ve looking for a low cost chip with Android 5.1 available that can run OpenCL. Mali-4xx can not run OpenCL. But $15 is not very low cost.

When it will be ready for market???

One of our Armbian devs had a look through schematic: All USB ports behind an internal GL850G hub (bad) and it seems possible to avoid Micro USB and power through the fan header (good). All in all: not interesting any longer if USB bandwidth is that limited.

@tkaiser
Yes, according to available schematic, it seems it’s possible to add current through one of the fan pins.
But, as usual, they leave one of the USB-bus unconnected to external ports.
And four external USB-ports connected through onboard USB-hub.

@dvl36 Too bad. Pretty fast CPU, pretty slow board for use cases that need I/O bandwidth. But that’s what all the cheaper boards from this and last year seem to have in common unless you leave the tablet/OTT route and choose SoCs from other segments (Marvell for example). BTW: The rumoured quad core Allwinner A20 successor (SATA!) seems to be coming as pin compatible A20E, internally called sun8iw11p1. Still dual core, higher clockspeeds for CPU cores and DRAM, different IP blocks for various stuff. So drivers will be an issue but if A20E also shows higher native SATA throughput it… Read more »

@tkaiser
Interesting. I can also see Allwinner B100. Any idea what it could be?

@Jean-Luc Aufranc (CNXSoft)
Nope, no idea. But since longsleep provided a list of changes between A64 BSP 1.2 and 2.0 you could crawl through the changes in the referenced Github repo. B100 seems to be clocked faster but no references to SATA (here I already stopped 😉 ).

@tkaiser
I agree, for me it will also be SoC of the year, especially if 2 sata ports will be available.

@Roel
2 SATA ports? No way since at least the ‘information leak’/rumours spread last year spoke of a new pin compatible SoC which would make upgrading existing designs plain simple. Nove, a linux-sunxi dev, looked into it and confirmed: ‘if it means something about how pin compatible it will be, pinctrl-sun8iw11p1.c is almost 1 to 1 match with A20’.

And please don’t forget that A20’s SATA implementation is limited to 45MB/s max. sequential write speeds (still for unknown reasons). If an A20E shows improvements here I would already be happy.

@tkaiser
I’ve read in the past that some people had issue with SATA multipliers on Allwinner A10/A20, so if that’s still a problem on these, improvements with the new processor would also be welcomed.

Is there any idea what it could be?

We speculated it could be either an Hisilicon or Mediatek solution. It’s also possible Allwinner has a new processor in the pipe they have not announced yet.

@Jean-Luc Aufranc (CNXSoft)
I missed this discussion. Thank you for pointing that out.