Atomo is a modular electronics protyping system comprised of four elements: Control, I/O, Power, and Connector, with the PCBs for each category color-coded with respectively red, blue, green, and black. The connector board connects power, I/O and control(ler) boards together in a way that’s supposed to be neater than most hand made prototypes. 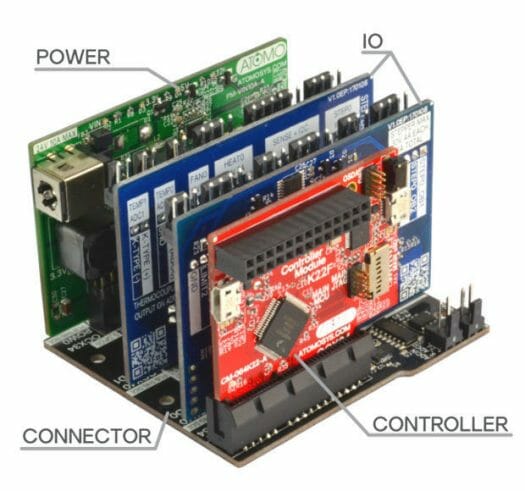 They also have one expansion module with USB input & UART headers, a USB port, an Ethernet port, and a 26-pin header, which you can use if you don’t connect the controller board to a Raspberry Pi. 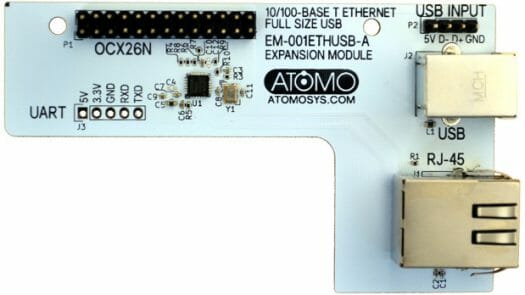 So now, you have to decide about your project’s power and IO requirements, select the boards, and put it all up together.  That’s what it looks like when the Raspberry Pi comes into play together with four IO modules and one ATX power board. 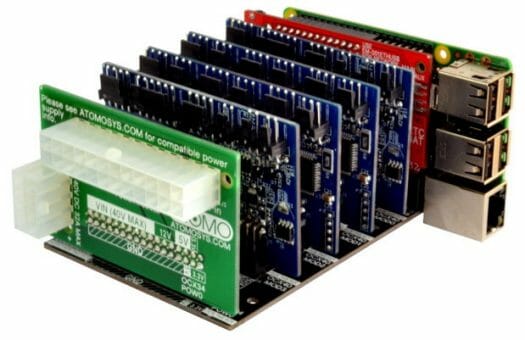 Now you’ll need to program the NXP Kinetis based controller board using  KDS and MCUXpresso, with low-level drivers using DMA provided by the developer, as well as board profiles with standard pin and clock configurations. ARM mbed compatibility, and RTOS integration are also planned for the future.

The video below introduces Atomo ecosystem, and shows a project with four LED strips.

Atomo has recently launched on Indiegogo, and the developer aims to raise at least $5,000 to fund mass production. Rewards start at $19 for the 2 IO controller board, and up to $48 for the 8 IO controller with the expansion board. The IO, power, and connector boards are not offered through Indiegogo – no wonder the campaign has not raised that much so far -,  but a 10% coupon is included with all perks to purchase them on Atomo Systems online shop.

While Atomo Systems is a one person company, but the project has “Arrow Certification” meaning this campaign has a working prototype that has been certified by Arrow Electronics, so hopefully project failure due to technical or manufacturing troubles is less likely. Shipping is free worldwide, and delivery is scheduled for June 2017.

Feels like revisiting the old motherboard idea. Albeit now the main processing board is also a card.

@agumonkey
Reminded me of the old ISA riser card for Dell etc too.

Thanks for the cohesive write-up. @agumonkey Yep, it is at least somewhat inspired by desktop PCs. @Theguyuk Yes! A friend of mine had one of those machines. The design process I took for the system was looking at what are the major divisions that make sense within a system. In this case, you can kind of look at the desktop motherboards and consider that the controller is actually removable. For me, the cheapest high pin count connector with a reasonable current limit was the PCIe ones. Just simply the best bang for the buck I could find. And, the density… Read more »

Oddly enough, it looks like you could almost recreate one if you wanted to. We certainly have enough memory:
“Additional boards became available with time, including a 40K memory board – TANRAM, made up of 32K of dynamic and 8K of static RAM, bringing the total non-paged memory to 48K”

I was more a TRS-80 user during that time.

JuicyBoard is another modular electronics project but focusing on 3D printers/CNC/router or other robotics applications.
https://www.crowdsupply.com/plugg-ee-labs/juicyboard

@Jean-Luc Aufranc (CNXSoft) Thanks for sharing, that is an interesting project. I would say the two biggest differences are the design decisions with power and controller. It looks like JuicyBoard would be great for building the systems they talk about, but there isn’t a simple upgrade path to make it ROS compatible (from what I can see) or to extend the controller functionality, so many good routes for general purpose robotics would not be on the table. The biggest drawback with the LPC controller they are using is that it will hit some limits as the Smoothieware project did, which… Read more »