We’ve seen several devices based on Realtek RTD1295 processor. They all come with a SATA interface, either via an external connector like Zidoo X9S, a 2.5″ SATA bay like Beelink SEA I, or a 3.5″ SATA bay as found in Eweat R9 Plus. However, all those devices are fanless, and at least one person expressed concerns when using a device with an internal hard drive without active cooling. MeLE V9 fills that gap, as the RTD1295 TV box features a 3.5″ SATA slot and an active fan for cooling both the device and the hard drive. 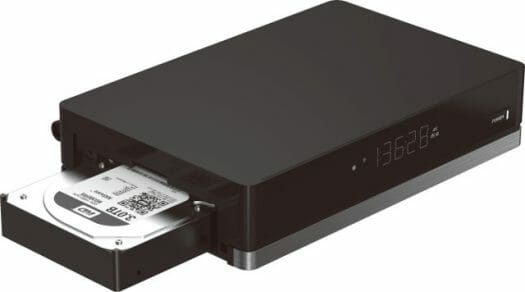 The box runs Android 6.0, but the company told me it lacked OpenWrt found on some competitor’s models. The device ships with a power supply with UK, EU, US, and AU plug adapter, a remote control, a HDMI cable, and a Quick Start Guide.

MeLE V9 TV box is now sold for $149.25 on Aliexpress including shipping. Note that the “normal price” is $199, and in the past I’ve seen the company often run short promotion for the device, while keeping the “normal price” most of the days. So if you are quick or patient depending on the price at the time, you should be able to get it for under $150.

@Mr Netflixer
I already do that: “Android TV box” vs “Android TV TV Box”.
Android TV boxes existed well before Google rebranded “Google TV” to “Android TV” OS, so the company was late to their own party, they have themselves to blame.

“Android TV” availability is also a disaster, it’s not available in most of the world.