Realtek RTD1295 SoC is so far found in devices running Android & OpenWrt, and equipped with an HDMI input port for recording, PiP, and UDP broadcasting. I have already reviewed Zidoo X9S with an external SATA port, and Eweat R9 Plus with a 3.5″ SATA bay, and I’ve now received Beelink SEA I offering another option thanks to 2.5″ SATA bay, and a lower price of $98.99 and up using coupon GBSEA16 with the 2GB/16GB version, or GBSEA32 with the 2GB/32GB version. As usual, I’ll start with some photos and a teardown in the first part of the review, before testing the firmware in more details.

I’ve received the box in the retail package below showing some of the features like 4K video playback, picture-in-picture thanks to the HDMI input, and supports for games and apps. 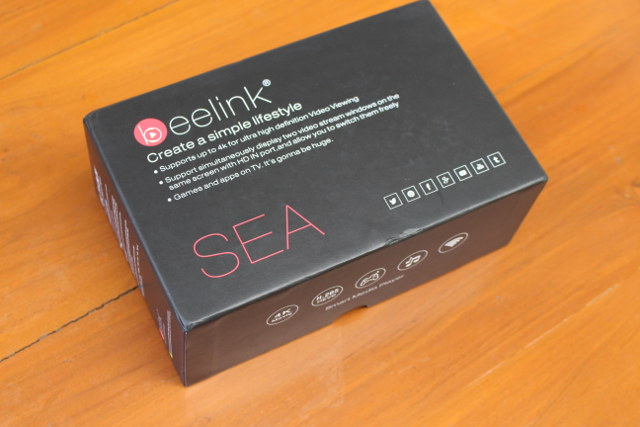 Beelink SEA I comes with either 16GB or 32GB eMMC flash for storage, and I received the 16GB version. 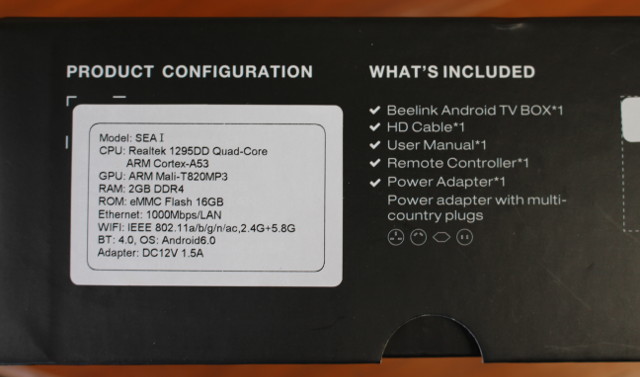 Contrary to its competitors which are all equipped with a metal case, SEA I comes in a plastic case, slightly wider than typical TV boxes to accommodate for the 2.5″ SATA bay.

The front panel includes an LCD display, an IR window, and power LED, one of the side comes with a USB 3.0 port, a USB 2.0 host port, and an SD card slot, while the rear panel features one HDMI 2.0 output, one HDMI 2.0 input, a Gigabit Ethernet port, optical S/PDIF, and the power jack.

If you want to insert an hard drive, you can do so by turning the box around, pushing out the cover, and inserting a 2.5″ hard drive up to 6TB in the slot. 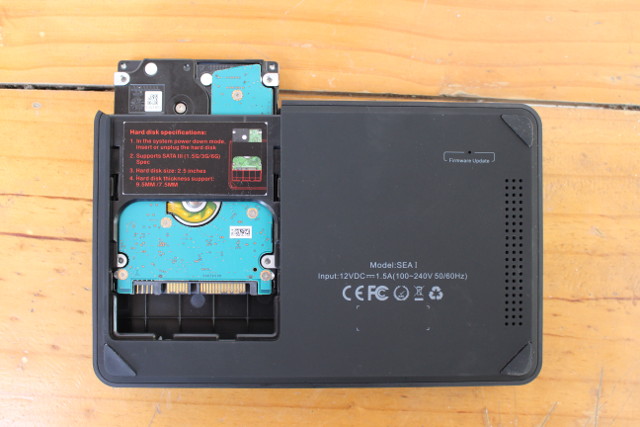 It’s very easy to do, and does not require any tools.

In order to open the device, we’ll need to remove the two rubber pads at the bottom of the case, loosen the two screws underneath, and use some ridig plastic tool to pop out the bottom cover.

There’s no much to see on the back side of the PCB, so we can loosen 6 screws, then pull out the board around the LCD area in order to take it out from the plastic enclosure. We can see cooling is achieved with a thermal pad placed on top of RTD1295DD SoC and stuck on a metal shield, which is then in contact with another thermal pad placed on top of a thick metal plate. We’ll have to see how effective it is during testing…

The company used a 16GB Samsung KLMAG1JENB-B041 eMMC 5.1 flash for storage with 285/40 MB/s read/write sequential performance, and 8K/10K random R/W IOPS, so they did not cut costs on that part, since the theoretical numbers are pretty good. The board also comes with two Samsung K4A8G165WB-BCRC DDR4 SDRAM  chips (2GB RAM). Networking is implemented with an 802.11ac and Bluetooth 4.0 LE module based on Realtek RTL8821AU, and H2403N transformer for Gigabit Ethernet connectivity. There’s also a chip marked S342 2227, but I’m unclear what it is for, maybe some sort of PMIC. Beelink SEA I is also one of the rare TV boxes with an RTC battery, and if you’re interested in working on the board, for example for RTD1295 mainline Linux kernel, the serial console is clearly marked on an unpopulated header on the right of “Beelink” silkscreen. 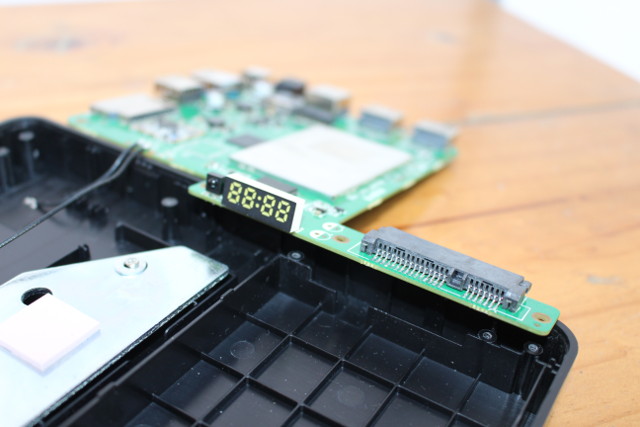 The front panel display is controlled via “AIP1618E0” display controller, but I could not find any references online.

I’d like to thank Beelink for sending the review sample. If you are interested in the device, you could purchase it on GearBest as mentioned in the introduction, while if you plan to purchase in quantities, you may want to contact Beelink directly instead.

I don’t see any mention of openwrt in the description on gearbest. Does this box not have it?

@The Cageybee
Maybe I have extrapolated that… But since Realtek SDK likely comes with Android and OpenWrt, as implemented in Zidoo and Eweat devices, Beelink would have had to actually do some extra work to remove OpenWrt from the SDK, which seems really odd and unlikely. I’ll start it up in about a week, so we’ll find out soon.

@Jean-Luc Aufranc (CNXSoft)
Not just you CNX there are others with posts saying openwrt, we have to await your furthers posts for answer.

any news on part 2 coming

@The Cageybee
I’ve connected the box.
So no OpenWrt in Android settings, but no WiFi, nor Ethernet either…
I’m getting an IP for both, but I can not access Internet, nor the local network with the box.
I’m postponing the review until a solution is found.

Now I just need to find a way to flash it. Waiting for Beelink feedback about that.

The one above (comment #8) is for the 32GB flash version.

can i used usb burning tool to flash this firmware?

@KAA
USB burning tool is specific to Amlogic. I still don’t know how to flash it.
It is the stock firmware. You don’t need to flash it unless you have some serious issues with your current firmware, e.g. the box does not boot.

I have this box and the HDMI splitter switch and others DO NOT work on the hdmi in port, does anyone know how I can output the TiVo hdmi out to this boxes hdmi IN. Or did the last PUSHED update screw me?