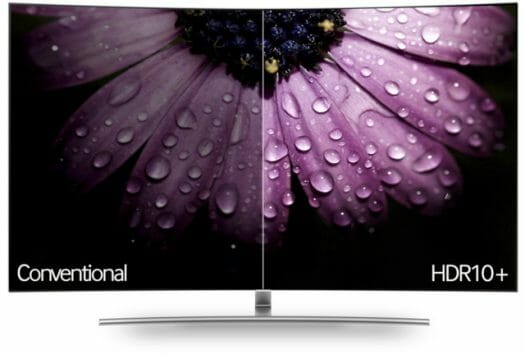 The companies describe the issues for HDR10′ static metadata as follows:

The current HDR10 standard utilizes static metadata that does not change during playback despite scene specific brightness levels. As a result, image quality may not be optimal in some scenes. For example, when a movie’s overall color scheme is very bright but has a few scenes filmed in relatively dim lighting, those scenes will appear significantly darker than what was originally envisioned by the director.

HDR10+ will be able to adjust metadata for each scene, and even for each frame, hence solving the issue of darker scenes. If you already own a Samsung TV with HDR10,  it’s not already outdated, as all 2017 UHD TVs already support HDR10+, and 2016 UHD TVs will support HDR10+ through a firmware update.

Amazon Video will be the first streaming service to deliver HDR10+ content, and Samsung also collaborated with other companies to integrate HDR10+ into products such as Colorfront’s Transkoder for post-production master, and MulticoreWare x265 video encoder.

HDR10 – and HDR10+ – is also said to be an open standard, but it could not find the specifications online, and only managed to find that HDR10 Media Profile main  must support EOTF: SMPTE ST 2084, 4:2:0 color Sub-sampling, 10-bit color depth, ITU-R BT.2020 color primaries, and SMPTE ST2086, MaxFALL and MaxCLL metadata defined in CTA 861.3-A standard (free preview) which you can purchase for $67. There must be some sort of CTA Standard for HDR dynamic metadata extensions for HDR10+, but I could not find anything [Update: Maybe SMPTE ST 2094-20-2016?]

Samsung showcased a static vs dynamic tone mapping demo at NAB 2016 last year, but it’s quite hard to see any differences in the video.

So, we are looking forward to hearing about the latest AmLogic creature (S905Y?) with HDR10+ capabilities 😉

It is a moving goal post situation, they keep changing things hoping something hits a trend and everyone, has as mad rush to up date their TV . It is the old GPU card sales method where they pushed out several varieties of card, all based on one chip, but lower cost versions crippled. Vertical markets trying to push for reasons to upgrade. IMHO

I’m not replacing my (ageing) Plasma TV until HDR standards have settled down!

you shouldn’t replace your Plasma by ANY LED, regardless the technology they are using in their panels. Only OLED is going to replace Plasma eventualy, because regular LED simply don’t have the image quality of Plasma let alone the quality of old CRT monitors.

Moreover, Samsung does many things good but many things bad, and one of those bad things are TV’s and Phones.

Theguyuk is right. This is another bullshit from Samsung. They always try to force their own standards. I.e, when everybody has HDR they have HDR1000, when everybody has UHD they have SUHD (supper?! 🙂 ), LED and QLED by Samsung, etc.. Basically HLG supports dynamic meta-data so why they do not use it? The tone range would not be wider than for the static meta-date like in PQ (10000nits). Then, static (generally) does not mean worst. If static tone is wide enough it covers different dynamic meta-data variants as well. I agree, that for the dynamic meta-data and narrow range… Read more »

nobitakun :
you shouldn’t replace your Plasma by ANY LED

yes, I know, I wouldn’t replace a plasma tv with anything but the emerging generation of OLED, with HDR+ etc.

the TV companies did themselves a massive disservice when they called LED-backlit LCDs just “LED TVs”. I knew one day when true LED (embodied as OLEDs) came along it would be a big headache.