The market is flooded of octa-core Android mini PCs or TV boxes for the consumer market, but Rockchip RK3368 powered Shuttle NS02E Android mini PC targets a different mark, specifically digital signage and thin clients as it’s been designed for 24/7 nonstop operation, and supports features such as PoE (Power over Ethernet).

NS02E also includes digital signage software, and DS Creator 2.0 app can be used with an Android 4.2 or greater phone or tablet to upload digital signage content such as scrolling text, pictures, videos and webpage links to your digital signage player, as well as to configure the display layout. 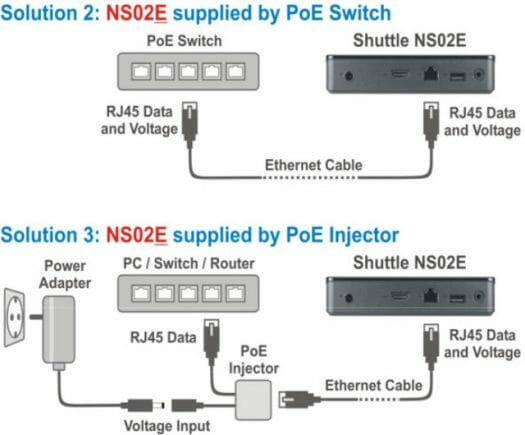 Thanks to ML for the tip.

Did someone know why they use the old Android 5.1.1; is the Rockchip RK3368 not Nougat compatible?
I like this fakt: “An Android image with root privileges is available on request.”
And the “DS Creator 2.0” does it have a shorter delay than screen mirroring?

One mix up that even Rockchip doesnt seem to realize: The GPU isnt a SGX part, but a Rogue part. Therefore its not a SGX6110 (That doesnt exist). The correct GPU model is PowerVR G6110. Its a entry level Rogue design.

Rockchip really ought to get mistake out of it because you see this on Gearbest/Geekbuying/Everywhere.

What is the use of poe in such device?
If you run digital signage a pc can be placed in 2 pozitions
-networking rack and you have a video delivery system
-on the back of the screen
In both place you have power 110 or 220
A digital signage player needs 4G not poe