If you’ve ever purchase a phone with Android X, you may have noticed it takes a long time to get an update to Android Y after Google officially release the latest version. The reason it takes so long, except on Google’s own hardware, is that the latest Android version needs to be update by the Silicon vendor, which then sends a BSP to manufacturers, who in turn brings their own tweaks, with in some cases telecom carriers involved in the last step, before delivering the update the end users. 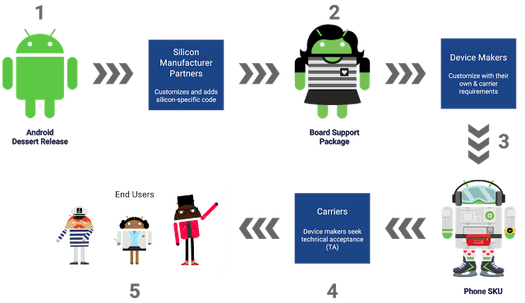 This is normally a time-consuming and costly process for all parties involved. One of the reasons is that while the higher level app API is fairly stable, the Android framework (middleware) interface to the Vendor’s implementation may change greatly between different major Android versions. Google is aiming to fix that with Project Treble, starting with Android O, by providing a stable vendor interface between versions.

That could save months of work, and for smaller manufacturers could make the difference between providing an update to a new Android version, or providing none. Project Treble also involves a Vendor Test Suite (VTS), similar to the Compatibility Test Suite (CTS) for the app developer API, to ensure forward compatibility with the vendor implementation.

Since Treble has only started being implemented in Android O, end users will only be able to see the benefits with the update from Android O to Android P sometimes in 2018 or 2019 depending on the release schedule for their device.

“What is the difference between Vista and Android? … Vista received updates during 10 years”

@Sander PCs are homogeneous. There is very little difference between them except for the speed of their CPU. That’s because 95% of them are based on Intel CPUs and chipsets. AMD/etc also try to exactly emulate Intel. This homogeneity make it fairly easy to issue updates. Intel and AMD also cooperate with the updating process. In the Android world there are several hundred different CPUs being used. Plus many of the vendors are purposely not cooperating with the upgrade process in order to force you into buying a new device every two years. Because of all of the hardware variety… Read more »

“PCs are homogeneous.” … yes, thanks to the Wintel leadership / monopoly. And … maybe thanks to Windows being closed source, so hardware manufacturers just can’t alter it. And thanks to no-altering, Microsoft can keep updating it directlly.

“The carriers like the revenues from the planned obsolescence too. ” … OK, interesting. Follow the Money … always the first step 😉

Maybe we need a WannaCry-like outbreak on Android to get a policy on Android updates.

> Maybe we need a WannaCry-like outbreak on Android to get a policy on Android updates.

Except that most of mobile users also activate the online backup for things like photos and contacts, so an outbreak like this would result to a minimal damage, as the user would simply wipe the phone and restore the data from the cloud backup.

It is the phone network model of upgrade for next phone model that results in very few updates. As of now however, Tablet sales fall for last two years, several phone makers have year on year profit falls. Even Apple has declining sales. Hence the push for talking speakers, VR gear and IOT, they desparatly search for the next big WOW factor. While oddly Nintedo kills sales of Nes mini classic which sells like hot cakes, Nintendo cite lack of resources, and instead focus only on Nintendo Switch. Seems mad to everyday folk but big business are the ones making… Read more »

The Android treadmill will only stop when large numbers of customers start refusing to buy new devices. That has already happened with Windows, it has not happened with phones. Plus the phone ecosystem likes their revenue from churn and they aren’t going to make it easy to avoid upgrading. Note that Google has the opposite motivation. They want platform stability in order to grow the platform as large as possible which maximizes advertising revenue. A stable platform translates to more and better apps. Google also wants you to feel secure in using Android so that you will use it more.… Read more »

@Jon Smirl > Google has the opposite motivation. They want platform stability Well then, they could have made mandatory requirements (to pass CTS and give access to Google Play) such as * DT-based kernels * mainlined/opensource kernel drivers (as opposed to custom silicon-specific kernels) * having a dedicated (vendor-provided) HAL partition (that would include the kernel, and stable API for HAL) that would be the only part controlled by the vendor, and keep the control over the (Google-provided) middleware/userspace (e.g. stagefright libraries, etc.), so that being stuck with a never-upgraded kernel/HAL does not block upgrading the remaining Android userspace… *… Read more »

Maybe the answer is Google should have a Android licence which requires a manufactures to provide a set amount of updates?

Google is limited in how hard it can push by the EU monopoly case. That case is perversely trying to fragment Android and make the phones more different from each other. Of Microsoft is who is pushing the EU case.