The majority of TV boxes sold today are running Android 4.4 to Android 6.0, but with the release of Android 7.0 for smartphones and tablets earlier this year, it was just a question of time before the OS got ported to TV boxes. Himedia appears to be the first company to have released Android 7.0 for their Hisilicon Hi3798CV200 based TV boxes, namely Q5 Pro and Q10 Pro. 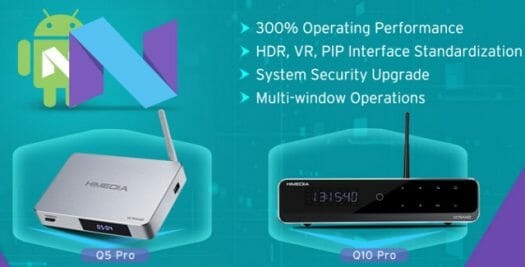 The changelog for the new firmware includes:

I assume most users are running Android 5.1.1 right now, but for those who are using an Android N beta version, a different firmware file is required

The update procedure is basically the same as most others Android TV boxes on the market:

Just bear in mind that changing Android version often leads to some new bugs, even though the company claims “perfect compatibility” and that everything is running “stable and smooth”.

@hex
HiSilicon provides both Android and Linux SDK, so in theory Linux is possible.

Netflix only in SD

@Jean-Luc Aufranc (CNXSoft)
in real? why?
-sorry my bad english-

@hex
Linux TV boxes were launched before Android TV boxes, and HiSilicon probably have customers still using Linux software for their IPTV or STB devices. That won’t be Linux desktop distributions, but likely something like buildroot available for Amlogic. That means you’ll have a minimal rootfs and libraries/APIs for the VPU and GPU in order to develop your own media applications.

I don’t think the SDK is out in the open however, and you probably need to sign an NDA or the like with HiSilicon.

Fingers crossed that the Poplar TV 96board Linaro platform – which is also based on the same HiSilicon processor – gets an Android and Linux source release soon.

Worth keeping an eye on https://github.com/96boards/documentation/issues/39 I’d suggest.

I have a Q10 Pro. For both Q10 Pro and Q5 Pro a 2 step update is required. Check the forums on futeko.com http://www.futeko.com/newforum/index.php?board=14.0. Also, upon upgrading data will be wiped. There are still issues to be solved for now. If you want a more stable TV box, use the last Lollipop based firmware for a month or two.

Yeah, I figured as much. I’m in no hurry to switch my Q10 pro to nougat. There has to be a good feature or a tangible improvement to promote such an upgrade, not “it’s a popular request from users” as reason

@Jean Lima
Yes. Most, if not all, 4K capable TV boxes can handle those files.