While I reviewed MINIX NEO Z83-4 mini PC last year, I found out the fanless mini PC based on Intel Atom X5-Z8300 processor performed well, even matching some Atom X7-Z8700 and Braswell systems in some cases, and offered some BIOS features not always found in competitor models, with the only real downside being the 32GB eMMC flash with average performance. Since then, it’s become quite popular becoming the best seller on Amazon US in the mini PC category, outselling devices like ASUS Chromebox and Apple Mac Mini, and the company has now launched a new variant called MINIX NEO Z83-4 Pro with Windows 10 Pro, an upgraded Intel Atom X5-Z8350 processor, and an included VESA mount making it more suitable for enterprise applications such as digital signage, point-of-sales, and thin client.

So from the mini PC point of view on the processor has changed, but it comes with Windows 10 Pro 64-bit instead of Windows 10 Home 64-bit, and as we’ll see below supports VESA mount.

I’ve just received an unexpected review sample this morning, so I’ll start by doing an unboxing and teardown post, before completing the review with Windows 10 Pro in a few weeks. 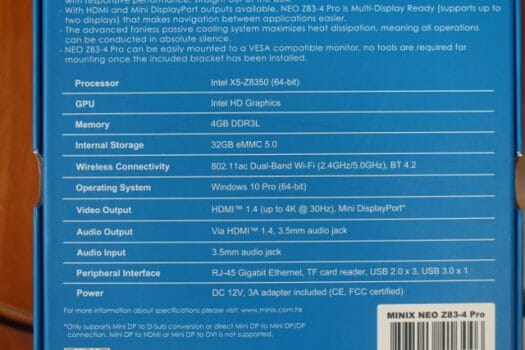 The other side of the package lists the specifications mentioned above.

When you first open the package, and take out the mini PC, you’ll find out it’s already clipped to the VESA mount, but it’s very easy remove it by pushing the top of the clips.

The ports are exactly the same as in MINIX NEO Z83-4 unboxing post, but last time I forgot to mention the pinhole close to the WiFi antenna connector is used to reset the CMOS memory in case of issues.

If you want to leverage the VESA mount, you’ll need to find a compatible TV or monitor, and tighten the mount to the back of the display with four screws. 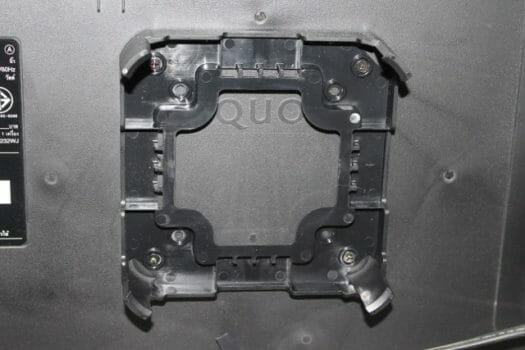 Then it’s easy just clip the mini PC to the back. No tools required for that last step. 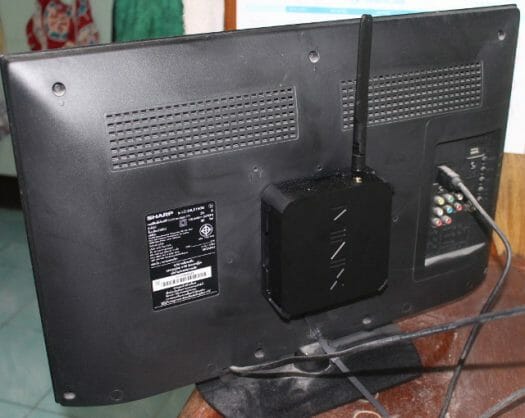 In order to open the case, we need to take out the rubber pads, and remove the four screws underneath.

The bottom cover should then come off fairly easily, and the board and thermal design appear to be identical to the ones used in MINIX NEO Z83-4 with a large heatsink covering the processor, storage, memory, and (Realtek) Gigabit transceiver, that makes contact with a thermal pad glued to the bottom of the case.

I’ve not removed the heatsink since this time, but since the company still uses an eMMC 5.0 flash, they certainly went with the same Samsung KLMBG4GEND-B031 flash since it’s the fastest 32GB eMMC 5.0 flash from Samsung, and SKHynix SDRAM chips.

The bottom of the board comes with the same Realtek ALC5645 audio codec, and Winbond 25Q64FWSIG 64Mbit SPI flash.

Please incorporate in your test the use of a gps device (bluetooth/usb) and driver like gpsdirect and navigation application like navigator or sygic.
Also use of flymouse like mxiii.
Thanks in advance.

Sometimes I think these PC Boxes would be better with small battery just in case of power problems. Without battery I just prefer to have a cheap laptop.

This thing is outdated before it even gets started. Totally meh

I have stopped reading since i saw that cpu is Cherry Trail and not Apollo Lake i don’t see point of buying box that don’t have 10bit h.265 support when you can buy box with Apollo Lake cpu for almost same amount of money

@J. R. Smit
That would be a very specific test, I could write a separate article if I can get a USB or Bluetooth dongle. I don’t expect it to be problem with Windows since it’s just a USB device.

I’ve never seen an air/fly mouse not working myself in the 100+ devices I’ve tested with MeLE or MINIX air mouse, but I heard some people having issues when connected to a USB 3.0 port.

did you do any video playback tests? i’d like to get an opinion on what you think of it, not that it would be a tv device, but just to get an idea the performance.
thanks

If you need something for video playback, the non pro version is just as good, and a bit cheaper.