I’ve listed specifications and posted photos of MINIX NEO Z83-4 mini PC in the first part of review, and while NEO Z83-4 is yet another Intel Atom x5-Z8300 device, it’s clear the company has made specific efforts for the thermal design with a large heatsink and aluminum bottom cover, and provided a solid 12V/3A power supply. So in the second part of the review, I’ll check how Windows 10 performs in the device, and run some benchmarks to compare it to other low power Intel mini PCs.

If you’ve connected USB mouse and keyboard, HDMI and Ethernet, a USB 3.0 hard drive to the USB 3.0 port, and the power cord. Pressing the power button on the right side will boot the device. 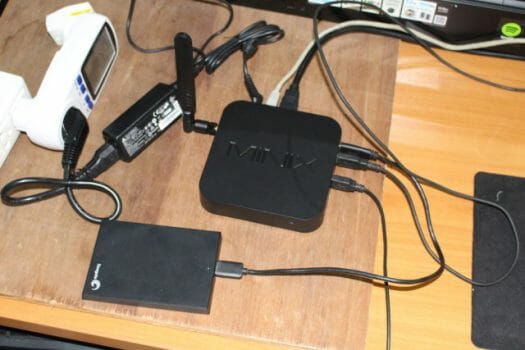 A typical boot will take around 30 seconds to the desktop. My system was already configured with Z83-4 user, possibly because MINIX tested the device before sending it to me, but for the first boot, users should normally go through Windows 10 setup to select the language, configure networking and so on.

If we check My Computer we can see the C: drive (eMMC flash partition) has a total capacity of 28.6GB with about 13.1 GB free, and the system also detected partition on my USB hard drive formatted with exFAT and NTFS file systems.

I’ve take the Device Manager screenshot for people wanting more details about the drivers, and runs HWiNFO64 to show a system summary.

There’s no surprise here, and the info is basically the same as other x5-Z8300 mini PCs such as Tronsmart Ara X5.

I’ve only run PCMARK 8 HOME 3.0 Accelerated benchmark, and skipped the “baseline” benchmark, as systems based on Intel Atom x5-Z8300 processor have been benchmarked so many times.

3DMarks results are also as expected, and a bit lower than NGC-1 since Intel Celeron N3150 has a faster GPU.

The device got 656.3 points in PassMark 8 benchmark, a result quite lower than other faster mini PC with Atom x7 or Braswell processors, but the benchmark is quite shorter in duration, so CPU throttling is not a factor in most cases. 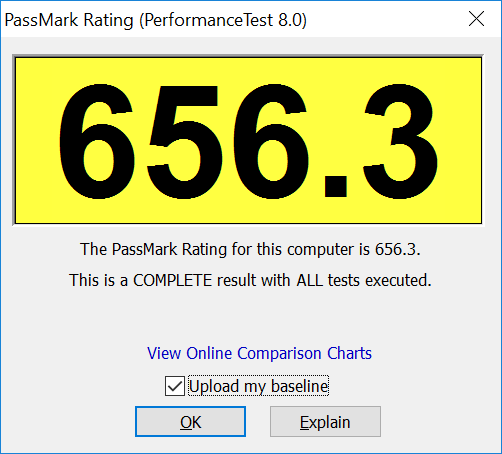 The eMMC flash performance is average however, since 32GB storage device are often a bit slower than their larger counterparts (64 / 128 GB), but still acceptable. 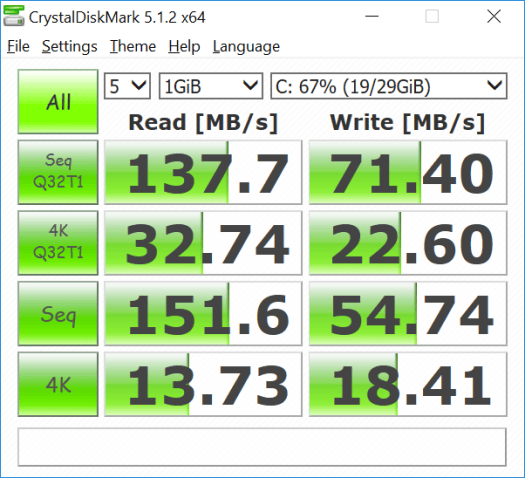 I also tested USB 3.0 throughput, and close to 100 MB/s is about where it should be. 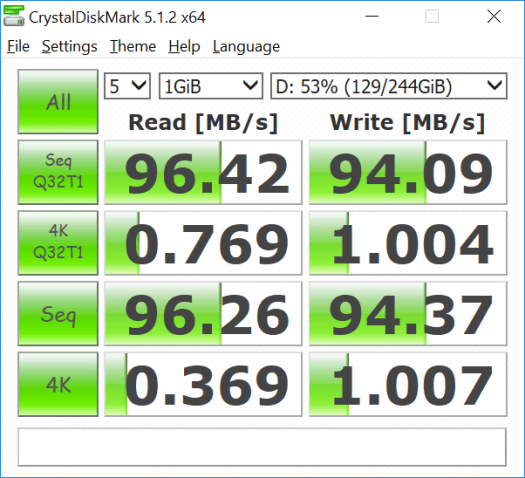 MINIX NEO Z83-4 mini PC has good networking options as it supports both Gigabit Ethernet and 802.11ac WiFi, and I had no issue connecting to my TP Link AC router the first time. 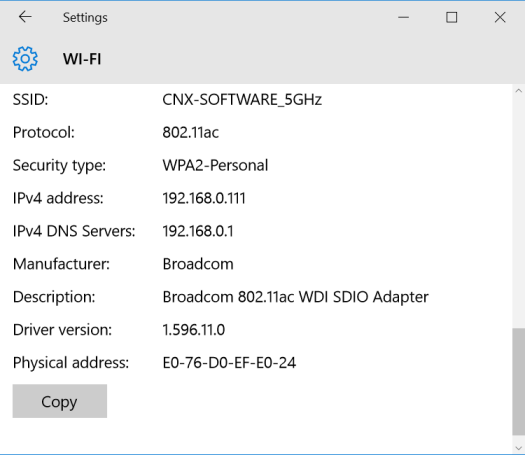 However, subsequent attempts all failed, with the Device Manager reporting an error with Broadcom 802.11ac WDI SDIO Adapter.

I’m unable to connect to any wireless networks when that happens. But I can either restart the PC, or faster, disable and re-enable the adapter, and I can connect to my two 2.4 GHz networks including one of the same TPLink AC router, but connecting to the 5 GHz access point will always cause the driver to fail…

That’s Fast Ethernet type of performance, and with my setup it’s an excellent result.

Performance is OK without being outstanding.

The table below compares the results to some competitors including Tronsmart Ara X5, Kangaroo Mobile Desktop, MINIX NGC-1, Intel NUC5CPYB, Voyo V3, Beelink BT7, and Vorke V1. Results for Ice Storm 1.2 are divided by 20 to make the graphics more readable. 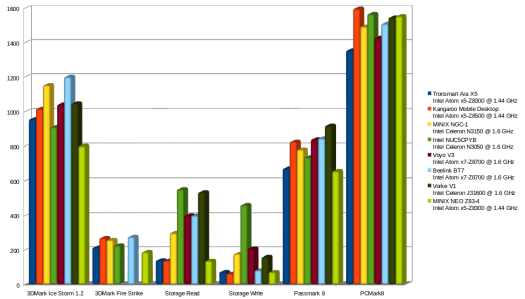 One oddity is that NEO Z83-4 has the weakest GPU score, even slightly lower than Tronsmart Ara X5, and storage and passmark results are about equivalent. PCMark 8 is the only benchmark that seems to show the strength of the platforms.

I’ve run most of the same test as on other mini PCs with 4GB RAM to see how well they can be used as desktop PC replacement, or at least as an Entry level computer, by running multiple programs, playing games, etc… I replaced my Kodi test, with always the same decent results in those Atom mini PCs, by checking out MINIX options in the BIOS.

MINIX NEO Z83-4 mini PC did well for all of those tests considering it’s a long end PC, and the performance is solid and constant. Adobe flash CPU usage was quite high in Firefox, and may perform better in Chrome or Microsoft Edge.

I also ran OCCT 4.4.2 system stress tool for three hours, and the computer stayed cool all the time only reaching 63 C max, with an average CPU frequency of 1.6 GHz between the base frequency (1.44 GHz), and the maximum burst frequency (1.84 GHz).

MINIX has also fone some work in the BIOS. So I’ve check their options in Aptio Setup Utility. Press Esc to enter the BIOS when the system boots.

Then go to Advanced->MINIX Feature Configuration.

You’ll find option to select between Apple or Nokia/Samsung earphone types for the 3.5mm audio jack, AC Power On if you want the computer to automatically start (without pressing the button) when power is applied, Wake-on-LAN, or RTC wake-up to set a specific date, or specific hour of the day to automatically turn on the computer.

I’ve quite pleased with MINIX NEO Z83-4 mini PC as the performance is stable, and for desktop tasks just as good, if not better, as some other mini PCs based on more powerful Intel Atom x7-Z8700 and Celeron Braswell processors. I also like the extra options in the BIOS, which are not always found in cheaper models, and the only major downside I found is some issue with Broadcom WiFi driver which reports an issue after attempting to connect to my 5.0 GHz / 802.11ac access point, despite initially working [Update: I tried again the day after, and I had no problem connecting to 802.11ac WiFi with very good performance]. 3D Graphics performance appears to be a little lower than expected too, and storage performance is average, if not below average.

I’d buy one only if it came windows-free.

Many years ago someone sued Microsoft to get the windows licence refunded (every possible computer came preloaded with windows back then) – I wonder what kind of deal the Chinese had struck here. Maybe the same could be achieved for a box like this.

New Broadcom WiFi driver which should fix the issue of the WiFi driver becoming disabled from time to time.
Link: http://pan.baidu.com/s/1nvTif6T passcode: xrsf

Requires a reboot after installation.

I’ve installed Windows 10 Anniversary update on MINIX NEO Z83-4. The standard method @ requires 20 GB free space, and there’s no enough space on a 32GB flash for that. But I found that using MediaCreatorTool as explained @ http://answers.microsoft.com/en-us/windows/forum/windows_10-update/windows-10-anniversary-update-for-32gb-emmc-budget/9158168e-54a2-4e9e-b6e7-784e7ace2469 does the trick:

1. Make sure you have 8GB of free space
2. Go and download the media creation tool from Microsoft: http://microsoft.com/en-us/software-download/windows10
3. Run MediaCreationTool.exe
4. Click Upgrade this PC now
5. Select Keep personal files and apps
6. Let it install and when its done you will have the anniversary update
7. Enjoy!

For some reasons, I had completely loss WiFi access (even before the anniversary update), because 4345r6nvram.txt file was missing in system/windows32/drivers.

Copying that file back, and rebooting the PC, fixed WiFi.

It should not be useful to most people, as it will already be installed on all retail devices.

Did you try this with dual displays? How’s the graphics performance like that?

@Rui Carmo
No, I did not have an eDP cable. I’ve tried dual display on other low power Intel platforms, and switching to dual display does not seem to impact the performance. See http://www.cnx-software.com/2015/01/29/mele-pcg03-mini-pc-review-and-benchmarks-with-windows-8-1-with-bing/

Hi,
does the display support UHD 4K at 60fps?
Thanks,
LB

Is there any way to upgrade the ssd?

@Ale
There’s no SSD. The board uses an eMMC flash (soldered). Check out the teardown @ http://www.cnx-software.com/2016/09/02/minix-neo-z83-4-fanless-mini-pc-review-part-1-specs-unboxing-and-teardown/

Sorry for the poor wording, by ssd I meant the emmc memory. Is there anyway to upgrade the emmc Drive? Maybe de-solder it and add a ssd using sata to usb adapter? Other options? Thansk!

@Ale
If you feel comfortable with desoldering and soldering BGA chips, you could unsolder the eMMC flash, check if there are enough balls and solder a 64GB eMMC flash if there is, and put the 32GB eMMC if not…

@GanjaBear – 100% agree. I want the quality, better cooling, Gigabit LAN, 4GB ram, good BIOS. (I don’t need the WiFi, but who cares). Want to put Debian Linux on it.
But knowing that I spend maybe $30 (some said $80) or more on the Windows license that I will delete, hurts.
Maybe there will be exact clones in the future?

Looks like you have it hooked up to a power meter ?

But I could not find any data on power usage ?

Can you give me some idea of the power average power usage ?

@JDM
Yes. The power consumption is about the same between those devices, so I did not report the numbers.
Power off was 0 watt.
Idle / light usage should be around 3 to 5 watts.
Under load power usage goes up to around 12 watts.

I am trying to use this as a HTPC and would like to know if this computer can be made to power itself up again after a power outage. It usually is a BIOS option. Can anyone help?