Koogeek BP2 is an FDA approved smart blood pressure monitor that connects over Bluetooth to your Android or iOS smartphone, or WiFi to the cloud. The company sent me a sample for evaluation, so let’s get started right away.

The device is sent in a cardboard package with Koogeek brand… 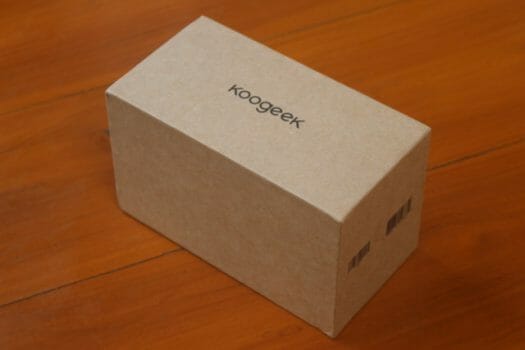 and some more derails about the specifications on the bottom of the package.

I asked the company to confirm about FDA approval, and they told me to look for K134029 on the FDA website, which lead me to this document testing Shenzhen Belter Health Management and Analysis ePA-46B, and comparing it to the results of Omron HEM-7200-Z (BP742) with the conclusion being that:

The Belter Blood pressure meter (ePA-46B) is substantially equivalent to the predicate devices.

Koogeek BP2 is the same as Belter ePA-46B, but just rebranded, and with a different mobile app.

In the package will find the device with the cuff attached to the main unit with an LCD display.

The top of the unit comes with a power button, an LED, a reset pin hole, and a micro USB port for charging the 400 mAh battery.

The package also included a charging cable and a multi-language quick start guide.

We’ll find marking for CE and FDA approval on the cuff, and it’s a medium cuff designed for arms between 22 and 36 cm circumference.

The blood pressure monitor wraps aroudn your upper arm, and is kept in place with Velcro. But before going ahead, you may want to read the user manual…

..with two pages per language, except for Chinese where there are more details provided. Beside English, and Chinese, other languages include French, German, Spanish, Italian, and Japanese. You may also want to charge the monitor before starting. It took about two hours to fully charge the device, with the LED blinking while charging, and solid once it is completed.

In theory, you could use the blood pressure monitor without smartphone, by pressing the button once to power it, and another time to start measurement, with diastolic and systolic blood pressure and heart rate shown on the display at the end. But mostly people will likely prefer to use a smartphone to keep track of the evolution instead of relying on pen and paper, and download Koogeek app available for Android or iOS.

Once it’s done, you’ll be asked to login and join Koogeek. THe latter can be done with an email, Facebook or Google+ account. I first tried with Facebook, and it failed with an HTTP 500 error, but I could go ahead with Google+.

You’ll then be prompted to created a new user. For the date of birth, make sure to tap on the year, as it makes it much faster than scrolling through the months… Also indicate your height and weight, and click on create a new user.

You’ll then be shown the timeline (empty), and can start using the monitor as follows:

The screenshot on the right above shows the results for systolic and diastolic blood pressure in a diagram with 6 different zones:

I’ve shot a video to show the full process.

In theory, after the first setup with the app, you can take measurements and upload results to the cloud without your smartphone. In the timeline, click the + button which will allow you to install a new device.

The company also offers smart scales, thermometers,  fitness trackers, etc.., but for our use case, I selected KS-BP2 device, and set it up to connect to my WiFi router. I then tried to make a measurement without starting the app, pressing the power button once to start it up, and once again to start measurement, and at the end I could see the WiFi icon on the display showing it upload the data to the cloud, but it may have gone too high, and to medical records heaven, as I was unable to retrieve the results in my phone. I had setup two users at the time, so maybe that’s why. There’s an unknown measurement section in the app, but the results were not their either.

You can create and switch between users in the timeline by tapping on the blue round icon in the bottom left corner with the initials of the current selected users, or switch between users and access to more settings by tapping on the three bars icon on the top left, which will also allow you to set reminders, adjust settings such as app language, units, Google Fit support, and so on. We’ve created two fictitious users to take daily measurements on two different real 🙂 humans between Monday and Saturday, and for each user you can access a chart with the blood pressure over time…

.. as well as heart rate, and a full list of measurements is also accessible. If you can see some outliers, it’s likely a problem with the measurements, but not due to the device. For example, Marge Simpson had a normal blood pressure only on September 11, but we can see the heartrate at 92 bpm was higher than during the other days, and so it must have interfered with the measurement, as we should have waited a little longer after sitting, before starting taking the blood pressure.

Koogeek BP2 (aka KS-BP2) works as expected most of the time, and results appears to be in line with reality based on each respective patient’s history, but I had troubles using WiFi to cloud function when not using my smartphone, and once the blood pressure monitor started to inflate, deflate, inflate, etc…as if it had troubles completing the measurements. I could easily stop it by pressing the power button to turn it off, and restarted it to make a successful measurement right after.

I’d like to thank Koogeek for sending the review sample, and Koogeek BP2 can be purchased for $69.99 on Amazon. Koogeek is a TomTop brand, so you’ll also find their products on Tomtop.com.

It’s cheaper to in port from wish for around $20

So long story short…no certification and your story put you in legal trouble….you better talk with a lawyer because your conclusion that the device has fda makes you part of this scam.

Fda certification is for a single product for a single brand and manufacturer and a single factory that needs to be iso certified and audited.

so there are the old Xiaomi power bank cases going!