Pine64 launched ROCK64 development board powered by Rockchip RK3328 processor a few months ago. The board exposes fast interfaces like Gigabit Ethernet and USB 3.0, and support 4K video playback, and runs Android 7.1 or various Linux distributions such as Ubuntu 16.04 and others.

Pine64 and Cloud Media companies share some of the same owners, and RK3328 being a TV box processor, it should not come as a surprise that Cloud Media has introduced Popcorn Hour Rockbox Basic TV box based on the processor. While the box is running Android 7.1 by default, it will also be support alternative operating systems such as LibreELEC, Android TV OS, Ubuntu, etc… thanks to the work of Pine64/Rock64 community. 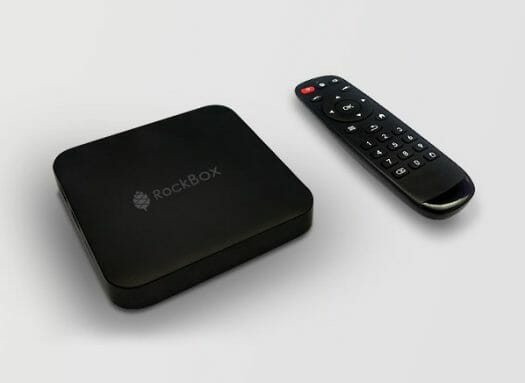 The box is not based on ROCK64 board per se, but the hardware will be similar enough, so that community firmware will work without too many modifications. The box will run Android 7.1.2 by default with RKMC (Kodi 16.1 fork) supporting HD audio pass-through, automatic framerate switching, and BD ISO. Kodi 17.4 installed from the Play Store will also work,but maybe the aforementioned features may not perform a well as in RKMC for now. 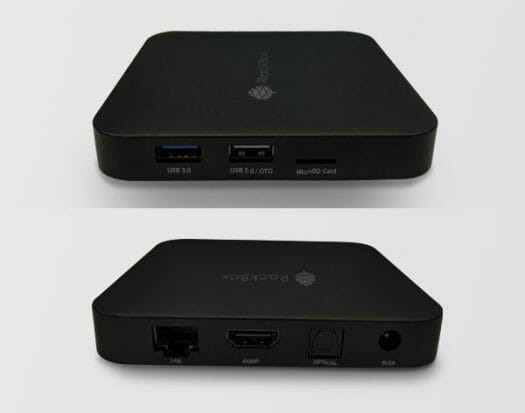 Other firmware image will be posted on Rockbox firmware page as they become available. For now, only Android 7.1.2 firmware can be downloaded.

The device ships with an IR remote control and a 5V/2A EU or US power supply, and can be purchased for $44.90 with free shipping to some countries like the US and Eurozone countries, while others may be charged an extra $9.99 for shipping. For comparison, A95X R2 TV box has similar specifications and sells for around $33 shipped, but build quality might be lower – for example the eMMC flash used is a bit slow -, and you’d likely have to spend more time figuring out how to run alterntive operating systems.

[Update: There will be another RockBox model with more memory and storage, Gigabit Ethernet, and stackable aluminum casing]

@zoobab
Armbian for Rock64 at least is WIP, IIRC…

It’s looklike very similare to Z28 / MX9 / MXQ and this rockbox seem overpriced.
There is many different PCB with the same enclosure so it’s hard to know what you buy exactly.
In my point of view there is 2 type of device, some have wireless via usb and other via sdio (new device).
Genius guy put wifi sdio module on sdmm0, the only one bootable!

@joe
You are assuming I have the box. I don’t.

Does it, or its bigger brother, support 3D?

Honestly $45 is not a bad deal considering that it comes with a case, power adapter, internal storage, and shipping. If we could get community linux builds running on the Z28 or A95X R2 (which can be had for as low as $25 shipped) that would be even better.

Thank you for developing such nice system.
Today, I got my PCH/Syabas RockBox and now, I wonder, how to change the app-resolution (maybe for a google-appstore-kodi17.6 or for the Synologs DS-Cam-app) to 3840×2160 (instead of 1280×720). Even in the Android developer-options, I couldn’t find an scaling-option.
Please tell me, how to disable the screen-scaling.

You’ll find some more details about this in the second part of the post https://www.cnx-software.com/2014/09/26/test-your-4k-device-true-resolution-with-a-4k-uhd-2160p-video-test-pattern/