UniElec U7621-06 is a router / gateway based on Mediatek MT7621 dual core/Quad Thread processor, and offered either as a board only or complete system with optional WiFi and/or LTE PCIe modules.

While the board is said to run OpenWrt or firmware based on Mediatek Linux SDK , the company also mentions the board runs Breed bootloader that can be used to  upgrade the firmware through a web interface. UniElec claims the router supports alternative firmware such as Padavan or PandoraBox. 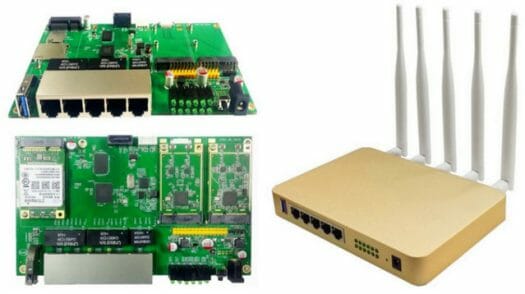 There’s a short discussion thread on 4PDA where they should some boot log, and other information (in Russian). 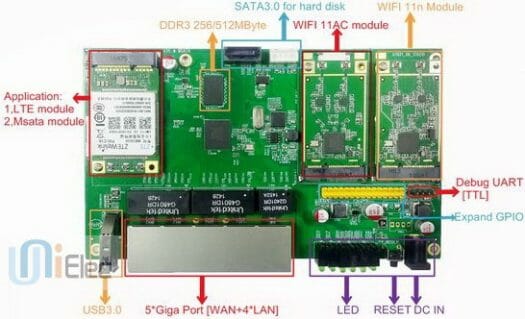 Most people who read this blog will know about OpenWrt, but I had never heard about Padavan, nor PandoraBox firmware.

The first is an open source project hosted on Bitbucket that aims to “improve the rt-n56u and other supported devices on the software part, allowing power user to take full control over their hardware”. This refers to ASUS RT-N56U router powered by Mediatek MT7621 SoC. The project is actually just called rt-n56u, and Andy Padavan is the developer.

The second is developed by a team of Chinese developer, and support various Mediatek routers. I could not find the source code, but we know it’s based on OpenWrt. You’ll find firmware for over 30 routers and evaluation boards, including PandoraBox-PBR-M1 firmware, that according to screenshots provided on Aliexpress, is the one compatible with UniElec U7621-06.

The router is sold on Aliexpress, with price starting at $41.90 with the board only without WiFi or LTE support, nor enclosure, and up to $124.80 with an MT7615 4×4 802.11ac Wave2 PCIe module, and metal enclosure. Between the two extremes, there are various options for WiFi modules, with or without enclosure. If you need LTE or mSATA, you’d have to source a compatible module separately. The manufacturer’s product page does not have much more information.

Thanks to Danman for the tip

@Jean-Luc Aufranc (CNXSoft): ‘1x PCIE connector for LTE or mSATA module’ is highly misleading (or simply wrong 😉 ) since there is no PCIe here involved. The board features the usual ASM1062 PCIe-to-SATA module and on the mPCIe/mSATA connector only SATA and USB2 are available but NO PCIE.

For me this seems to be an ideal base for NAS. You have 2xSATA interfaces available and can add more using ASM1062 mpcie modules. And it’s much cheaper than that GNUBee which is basically the same HW.

@danman
If 16-20 MB/s Samba ‘performance’ defines ‘ideal base for NAS’ for you, why not? Only 256 MB DRAM especially combined with an old smelly kernel will prevent using any modern filesystems/features and if you compare with GNUBee you might realize just later that you have to take care about an enclosure and sufficient powering here too (12V+5V when you’re thinking about 3.5″ HDD).

@Jean-Luc Aufranc (CNXSoft) No idea but… mSATA and mPCIe share the same connector but either SATA or PCIe can be used since data lines are pinmuxed (but optionally two additional USB2 data lines on pins 36/38 are possible though AFAIK only specified for the mPCIe use case). So there’s no clear naming scheme and it’s important to have a closer look what’s routed to the connector. In the above case there’s 2 x PCIe but the 3rd slot is mSATA+USB. It’s important to clarify this since users otherwise think they could insert another mPCIe card (eg. a PCIe SATA controller)… Read more »

@tkaiser
The important would be to differentiate between the physical connector, and the interfaces connected to it. For example when we talk about 204-pin SODIMM, and 314-pin MXM connector, there’s no confusion. It’s clear those are just connectors that can be connected to all sorts of signals.

But in the case of PCIe, it looks like the name can refer to both the connector (PCIe/mPCIe) to which you could connect USB, SATA, GPIO, or whatever, and the actual PCIe interface. So if there was a specific name for the connector itself it would help eliminating the confusion somewhat.

cnxsoft : The important would be to differentiate between the physical connector, and the interfaces connected to it. I know but how? We could use the term ‘PCI Express Mini Card’ — see https://en.wikipedia.org/wiki/PCI_Express#MINI-CARD — and it still wouldn’t help since it’s important what the connector in question carries. And their description you copied calling the above slot ‘PCIE connector for LTE or mSATA module’ is still just wrong/misleading since nowhere PCIE involved but only SATA and USB2 available on this slot. But since we also deal with absolutely careless vendors even if on a board there’s a mPCIe slot… Read more »

> The important would be to differentiate between the physical connector, and the interfaces connected to it.

@tkaiser
you can see in your linked article: “RAID array has been created and the syncing IO speed is ~86MB/s” and “[email protected]” si way too big difference so I guess there will be some problem with configuration. And “I only believe in statistics that I doctored myself” so we will see when it arrives… Check my blog then 😉

@danman Yeah, please post your results though I somehow lost my interest in MT7621 in the meantime (wasted already way too much time the last years with crappy vendor ARM kernels and this here seems to be an excercise in wasting time again but this time with MIPS instead of ARM instead — reading through github.com/gnubee-git/GnuBee_Docs/issues/28 was both interesting and discouraging). Wrt NAS performance: Yep, quite easy to trash Samba performance on those little gems when inappropriate settings are used. That’s why I mentioned some stuff over in the GNUBee comments section already. Anyway: the Samba performance screenshot from WiTi… Read more »

@tkaiser @Jean-Luc Aufranc (CNXSoft) The physical connector is still mini PCIe, so there’s no other name for it. The problem is that the mSATA standard shares the same physical connector. The full mini PCIe standard calls for: PCI Express ×1 (with SMBus) USB 2.0 Wires to diagnostics LEDs for wireless network (i.e., Wi-Fi) status on computer’s chassis SIM card for GSM and WCDMA applications (UIM signals on spec.). 1.5 V and 3.3 V power Obviously the SIM card is not available on a lot of devices that has a mini PCIe slot for one and SATA support was a much… Read more »

I’ve seen some motherboard manuals call them “mSATA connectors” in this case. That makes sense after all since you can only connect an mSATA device on them. You don’t really care that they use the same physical connector as a PCIe module if only this one is usable, and it limits confusion. Note, I remember the Armada370-based Mirabox supporting only PCIe and no SATA on this connector… That doesn’t help!

i’m going to need a 4G router very soon, this looks like an interesting cheap board (won’t need an up to date / secure kernel).

but i’ve been looking for 4G mpcie cards and my first searches will only source quite expensive parts 40-90e, am i missing something ?

This should be a great cheap powerfull ipsec router. Kudos to Unielec, I”ll order one to test.

Is it supported (developed) by padavan personally or just based on his repository of source code? This is a huge difference

@Genix
Considering the UniELEC logo in the interface, the company probably forked his work.

@tkaiser
first tests: samba: 62MB/s from 3TB Barracuda disk attached over USB3
I’m fine with that speed.
I guess onboard SATA will be a bit better but I don’t have sata cables at hand.
http://blog.danman.eu/wp-content/uploads/2017/10/mt7621a-usb-samba2.png

I have this board.
Is download link for PandoraBox firmware down or moved to somewhere else? downloads.pandorabox.com.cn/pandorabox/PandoraBox-PBR-M1/

@zoobab did you get this board? What’s the mainline/lede support situation like?

@lePereT
I have not unboxed them yet, it is on my todo.

I’ll do some tests and report later. Hardware build quality looks nice and shipping is fast.

Pandorabox is a dead project. Repo links are dead.

Openwrt build for this router is development build and have annoying bugs.

Padavan is completely another story. It’s not like openwrt. You cannot install packages.

@Denis
Good luck with this error because I’ve been getting this error constantly https://bugs.lede-project.org/index.php?do=details&task_id=972&opened=61
To save your time, stay with the firmware that comes with the router which is PandoraBox 14.09.
It doesn’t have that error but you won’t be able install packages because PandoraBox package repo links are dead.

this is like a company from nowhere, dare not to buy from them, sorry