Most people are used to program Arduino compatible boards with the Arduino IDE that they’ve installed in their Windows/Linux/Mac OS computer, and manage everything locally. But Arduino introduced Arduino Create last year, which includes Arduino Web Editor allowing you to perform the same tasks in your web browser, and save your files in the cloud.

The company has now added Linux support to Arduino Create so that users can now program their Linux devices as if they were regular Arduino boards, and easily deploy IoT applications with integrated cloud services. The initial release has been sponsored by Intel, and currently supports X86/X86_64 boards, but other hardware architectures will be supported in the coming month.

In the meantime, AAEON UP2 board is the best platform to get started, as a complete getting started guide is available for the platform. But other mini PCs such as Intel NUC, Dell Wyse, Gigabyte GB-BXT are also supported, and you’ll find more generic instructions to get started.

Multiple Arduino programs can run simultaneously on a Linux devices and can communicate with each other thanks to MQTT based Arduino Connector. There are a currently three projects based on UP Squared board on the Project Hub, and if you need help, a dedicated forum has been launched. 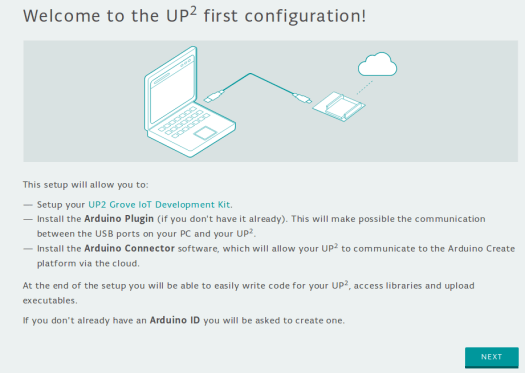 Intel provided a few more details about the initiative in their announcement, highlighting the following points: