You must have read articles or watch videos showing laptop or smartphone battery explode, and Lithium-ion batteries are considered hazardous enough that they are banned from airplane without the proper paper work. Such batteries can catch fire or even exploded when overcharged, or physically damaged. We have protection circuits for the former, and physical damage seldom happens, so in most cases the batteries are safe, and that’s why they are still used in laptops and phones.

However, if you need maximum safety, Lithium ceramic battery (LCB) may be the way to go. Those are still Lithium-ion battery cells, but they replace the liquid polymer separator found in Li polymer battery (LPB) by a solid-state ceramic electrolyte, and you can mistreat them almost as much as you like with overcharge, cut them, bend them, and they won’t catch fire, nor explode. 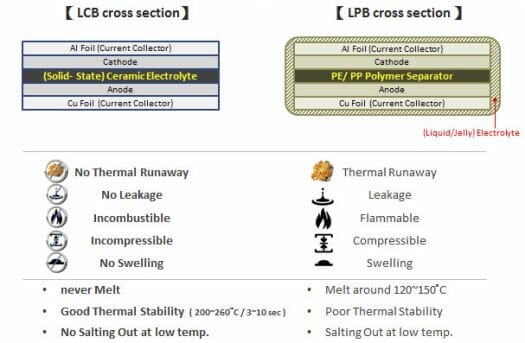 One company that makes such batteries is Taiwan based Prologium Technology, and they explain:

…there is no leakage and no flammable material inside, no shortage will happen under the normal usage, physical impact tests, or electrical damage tests, either. The Solid-state Ceramic Electrolyte also has good thermal stability includes 200~260°C for 3~10 seconds. There is no thermal runaway at 350°C or salting out at low temp. It never melt as well (LPB will melt around 120~150°C). Therefore, even it’s damaged by folding, hitting, penetrating, heating (250°C, 5hrs), LCB doesn’t fire nor explode.

Their batteries were tested by what looks like an independent reviewer (If you know his name, or YouTube account, let us know in the comments section), who really mistreated the battery, and they never caught fire, while LiPo batteries could easily catch fire when destroyed.

The video was shot in 2015, so if LC batteries only had positive, they’ll be in many products by now. I’m assuming price might be the issue, the company also mentions that “the biggest natural difficulties of solid-state Li Battery are poor C-rate, and high inner resistance”, but they claim to have made improvements with the “best C-rate and lowest inner resistance than any other solid-state battery in the world”.

I had also heard about solid state batteries recently while listening to a financial podcast about TESLA and electric cars, which made the case that current Lithium batteries may be obsolete soon, as Toyota had developed solid-state batteries with higher battery density allowing for longer range or smaller batteries, and fast charging capabilities (~5 minutes for a car battery). If the chart above is to be trusted, all solid state battery should eventually have two to three times the battery density of current Lithium Ion batteries. We’ll have to see how it goes, as I’ve seen many over-hyped battery technology over the year, and the vast majority miserably fail, ending as money pits for investors… Other companies are also working on solid-state battery technology, so I’m hopeful at least some will get it right. It’s not only for cars, as there are reports Samsung will use solid state batteries in phones in 2019.

Thanks to Nanik for the tip

The main problem is the formation of dentrite in the separator between the cathode and the anode as the charge cycles progress.
Sometimes on a battery at the end of its life, the anode comes into contact with the cathode and causes a short circuit, overheating and fire.
The separator must have the lowest possible resistance, which is quite incompatible with a thick separator.
So even if we progress very slowly in a non-incendiary battery, they remain at low mass power compared to those which have a fine separator.

Waste of time. Once Big Government decides to ban something, un-banning it is almost impossible.

@bob
Next step in Li-ion is expected to address dentrites, among other improvements: http://news.rice.edu/2017/10/02/asphalt-helps-lithium-batteries-charge-faster/

Presuming they can be made and mass produced; are there no down sides to this technology? They sound too good.