A little while ago, I received a bunch of ESP32 PICO Core development boards which were based on Espressif Systems ESP32-PICO-D4 system-in-package with ESP32, 4MB SPI Flash, and other components. The advantage of such chip is that is requires less external component, and allows for smaller designs. For example, the boards I received would leave two row of pin on each side of the board, while most other ESP32 boards will only expose one row on each side.

I used the board to play with Micropython ESP32 port, and later-on when I launched a giveaway of 8 of the boards, I found out the name had changed to ESP32-PICO Kit, with the documentation listing v3 with all pins connected to male headers, and v4 with 6-pin not connected to a male header as shown in the photo below. Both versions of the board also have a different pin layout. But you don’t need to care since AFAIK v3 was never up for sale. 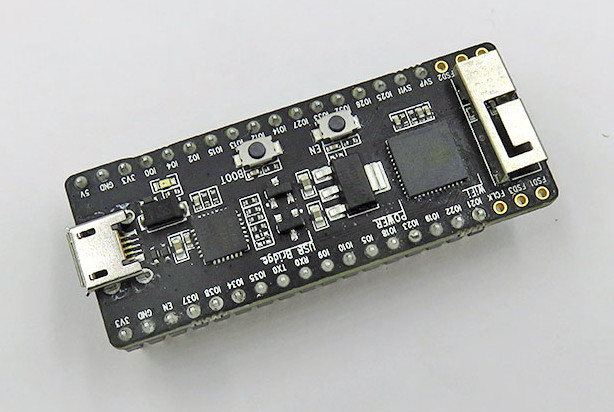 ESP32-PICO-KIT v4 however has now just launched, and Electrodragon offers it for $10 plus shipping.

This board can be used like any other ESP32 board with ESP32 IDF SDK, Arduino Core, Micropython, and so on, it’s just narrower than most.

Other ESP32-PICO-D4 based boards have been launched such ESP32-PICO motherboard sold for $16 on Tindie, or TTGO T7, recently discovered by Time4EE, that can be purchased for $8.50 plus shipping on Aliexpress. The latter is however quite wider than the official Espressif devkit (estimated dimensions: 50×30 mm), but does provide a battery connector

Standard ESP32 boards can now be purchased for as low as $5, so boards based on the SiP are currently a little bit more expensive, but I’d expect the price difference to come down overtime.

There’s a nice picture of just the chip/antenna here:
https://blog.hackster.io/introducing-the-new-esp32-pico-d4-sip-99476238bc07

Yeah ordered 30 of those wemos lite for the local hackerspace…