Last week, I wrote about ESP32-PICO-D4 system-in-package (SiP) that contains ESP32 WiSoC, 4MP SPI flash, a crystal oscilloscator and some passive components in a single 7×7 mm package in order to allow smaller designs based on ESP32. The company noticed the post, and asked me whether I’d be interested in receiving “some development boards based on ESP32 PICO”, an offer hard to refuse :), and within a couple of days I received the package below. 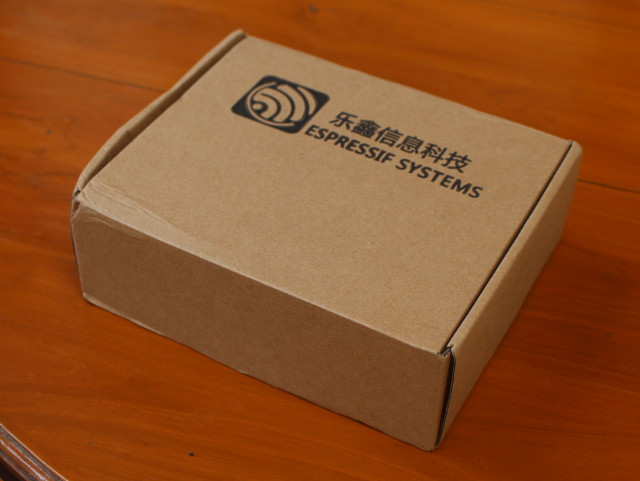 So I  ended up with 10 identical development kits, the company probably thought it was no worth paying for DHL to only send one or two development boards… The boards may also be part of some contests… We’ll see 😉 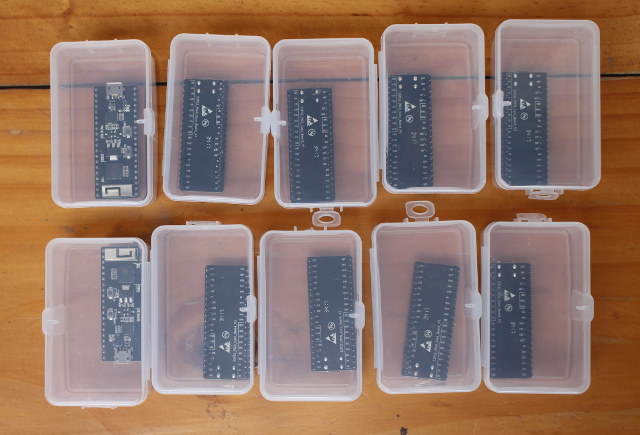 So let’s take two, and have a closer look at “ESP32_PICO_Core_Board_V3″… It comes with two rows of 20 pins with access to all I/Os, and features three main chips: ESP32-PICO-D4 SiP, AMS1117 voltage regulator, and Silabs CP2102 USB to UART controller for programming and debugging.

There’s also an antenna, a EN and BOOT buttons, and a micro USB port. The board measures 52x20mm. On actual product, the USB bridge part would be there, so you could have something around half size or even much smaller…

… something like the ESP32-PICO-D4 module below whose picture I found on the web. 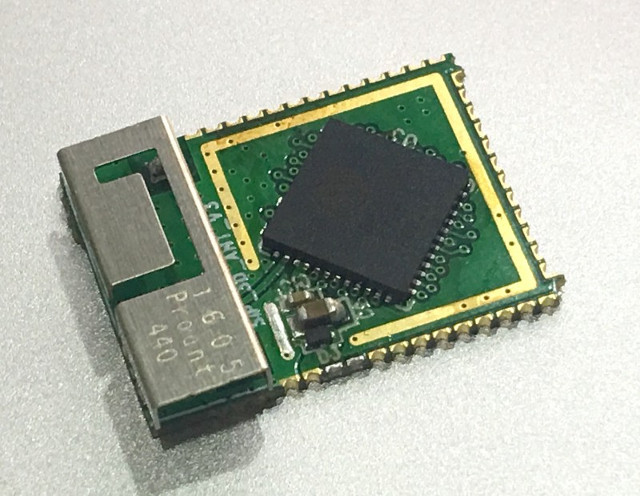 ESP32-PICO-D4 features are basically the same of ESP32 ones, just more compact, so how does ESP32 PICO Core board compares to other breadboard friendly board based on ESP32? To find out, I compare it to ESP32-T board with ESP32-Bit module, and ESPino32 board with ESP-WROOM-32 module, which I plan to review/play with in about 2 weeks.

ESP32 Pico Core is clearly smaller. Compared to ESP32-T it’s about the same length, but much thinner, and include 2 extra pins, while in terms on functionality it’s more comparable to ESPino32 both with 40-pins, two button, and micro USB port, but the size difference is even greater.

If you wonder, the board is breadboard compatible, and since it’s thinner leave two rows of pins free on each side, compared to just one for most boards.

The boards are not for sale right now, and there’s no info on their website about them. You’ll however find some more details in ESP32-PICO-D4 datasheet.

The ESP32 PICO datasheet is no longer available on Espressif website.

Cool, some companies are making progress to make these modules more usable! I’ve personally been working on this recently and am still finding that some improvement is possible in this area (namely by removing the power-hungry USB UART from the CPU board and leaving only RxD/TxD/EN/REST exposed instead) : https://wtarreau.blogspot.fr/2017/08/what-esp8266-modules-should-look-like.html

Google BB-ESPADP and save work

@Xatax
True. The text is still accessible via Google Cache.
I don’t have the file myself, as I just clicked on Open instead of Download.

Espressif is guilty of oftentimes having somewhat large leadtimes on getting the modules out so info may be pulled, etc. because they ran into a production problem with the modules. We’re still sort of waiting on the WROOM modules which add the 4MB PSRAM module and the ability to attach an external antenna to the module.

The modules are wicked cool. It shows to them thinking ahead because the devboards are an improvement over the prior pass- and the prior pass weren’t no slouch, just not breadboard friendly.

@Nobody of Import
Existing boards are cool for development but are unusable for battery-powered projects unfortunately, due to the USB UART draining all the battery. And they’re a bit large for *some* projects. Otherwise they’re cool and have significantly contributed to ESP’s adoption everywhere!

There is a great board named m5stack with esp32 + 2″ screen w touch + 3 buttons + audio 1W + a “design enclosure” for 20$ on aliexpress. on reddit the vendor said 10$ to 15$ (single core or full kit).
Hope this great display move the lines to make more lcd + button frame to finish a device with good user experience.

Chris you seem to be massively oversupplied with these boards. I’d be glad to take one or two and try flashing Micropython immediately!

It would be interesting to play with one.