So far it was the only A.I USB stick solution that I heard of, but Gyrfalcon Technology , a US startup funded at the beginning of last year, has developed its own “artificial intelligence processor” with Lightspeeur 2801S, as well as a neural USB compute stick featuring the solution: Laceli AI Compute Stick. 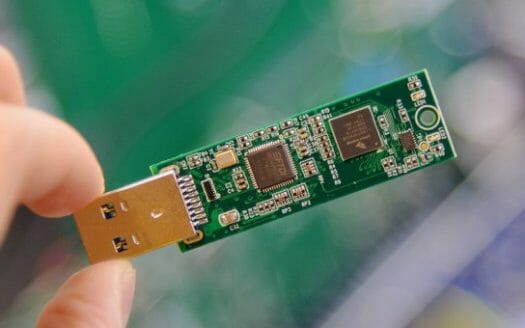 The company claims Laceli AI Compute Stick runs at 2.8 TOPS (Trillion operation per second) performance within 0.3 Watt of power, which is 90 times more efficient than the Movidius USB Stick that can deliver 100 GFLOPS (0.1 TOPS) within 1 Watt of power.

Information about the processor and stick is rather limited, but Gyrfalcon explains their APiM architecture (AI Processing in Memory) uses memory as the AI processing unit, which eliminates the large data movement resulting in high power consumption. The processor comes with 28,000 parallel computing cores and does not require external memory. The stick is also equipped with 4GB storage, a USB 3.0 port, and works with Caffe and TensorFlow.

Going to the company website, we’ll also find a complete development kit with USB Interface, eMMC flash, and special access port, as well as a multi-chip board with PCIe and M.2 Interfaces that appears to combine eight Lightspeeur 2801S AI processors.

The processor is already in production, and available to “qualified customers”, while the Laceli AI Compute Stick will first be showcased at CES 2018 in Las Vegas in a few days.

considering there is no “compute stick” with myriad x it’s not really unfair to compare this module against the vpu2 as there is nothing else to compare it to. it’s Intel’s fault that the numbers look so biased toward the lightspeeur