Gemini Lake mini PCs are being announced at CES 2018, and we can expect them to sell in Q2 2018 for a price similar to Apollo Lake models all other features being equal. We’ve already seen ZOTAC ZBOX PI226 & PI336, ASUS unveiled their PN40 mini PC with few details, and of course Intel’s own GLK NUCs should be brought to market soon enough.

MeLE has made some decent Apollo Lake mini PCs in the past year with their PCG35 Apo and PCG03 Apo models, so it’s no surprise the company is now showcasing their upcoming PCG63-APL4 based on Gemini Lake processors at CES 2018. 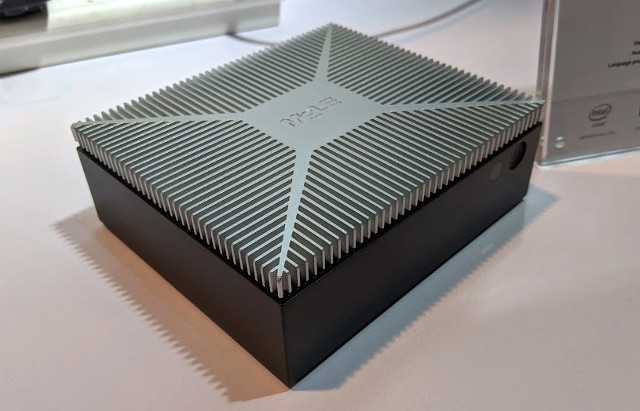 PCG63-APL4 is quite a confusing as it sounds a like “Apollo Lake 4”, using something like PCG63-GLK1 may have more sense. 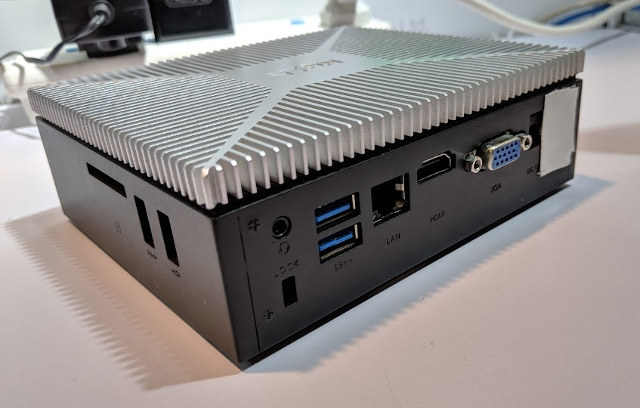 The complains said they plan to support both Windows 10 or Ubuntu, but last year, they completely ignored Ubuntu, and AFAICR did not launch any Ubuntu models, like they did in 2016. Mass production is scheduled to start at the end of March 2018, which probably means sales will start in early Q2 2018. No pricing info was provided.

@cnxsoft: are you sure about gemini lake ? you mentionned apollo lake only in the SoC section, so maybe APL4 is fine in the end.

@willy
Yes sure. Sorry I made a mistake using “Apollo” instead of “Gemini” in the specs. All processors in the new mini PC are part of Gemini Lake family.

So it has a heatsink and no fan.
But it probably gets full with a lot of dust inside the heatsink… Couldn’t they implement a better design?

Finally a well tought out heatsink design. Having the heatsink outside of the case and not on the inside is much better than what zotac does with their zboxes. It looks beefy enough to even for a 15W U-CPU or more.
These chinese companies improve their design at a staggering rate, but there is still room to go. Now if they would also understand that natural convection in passive heatsinks normally occurs in a vertical fashion and would account for that vertical airflow, that would be even better. Also a silver passive heatsink is not ideal, black anodizing would improve heat radiation by more than 10% with the same heatsink.

@Ron: Dust is not at all a problem with this design as fin spacing is pretty big and the heatsink is very oversized. Imagine how quickly the dust clogs normally when all this dusty air is sucked into the chassis by a fan and then through fins 3 times as dense as this design. There is less air movement than fan-based design, thus less clogging. The only difference with this design is that you could actually see dust between the fins because it is outside and you could eventually clean it. But as i stated, the cooling solution seems pretty oversized for a 10W Soc, it will work fine even with a thick layer of dust on it.

@Ron
If they made the heatsink smooth you could use the device* as an iron while compiling the kernel. “IronPC(tm)”.
*for best results configure the device as a wifi connected headless server

Generally, a heatsink is inside the box, and not outside.

And maybe even this heatsink could have been placed at the bottom and not on the top (maybe it would require to alter the placement of the components inside the box).

Just for an example: Apple makes fanless Macbooks, and they don’t look like that, and their chassis is very thin – even though their CPU has a higher wattage.

@Tomm
What problem(s) have you had with MeLE BIOS?

And it would have looked better if the chassis was the same color as the heatsink – silver or black, and didn’t have 2 contrasting colors.

According to the wisdom of the Interwebs (including Wonkeypedia)

“In natural convection a black or dark colored heatsink will perform 3% to 8% better than an aluminum heatsink in its natural silverish color. This is due to the fact that dark colors radiate heat more efficiently.”

So the color of the heatsink would be signigicantly better if it was black, the same as the main enclosure, both from an aesthetic and functional perspective.

One does wonder why they chose silver? So that the usual gray fluff it will accumulate does not show up as it would do with a silver gray heatsink?

The Mele-PCG35 has been working really well for me. I have a few running 24Hrs a day as very low powered Ubuntu servers. I do only run them in CLI though, so I have not tested Linux graphics, but if you need a little machine that sips power and is more powerful than a Raspberry Pi, I’d pick up another Mele any day of the week! Here is the video of the complete install process, including the one BIOS setting you need to change: https://youtu.be/kZFQdv5fAPg

Having the heatsink on top and exposed is also a great move I suspect, although nothing is wrong with the cooling of the current version. Even when overclocked it stays moderately cool, but a fan does help. If you are using both the CPU and GPU at the same time, it can make a big difference in performance: https://youtu.be/sWq7_GuebRw