Samsung has introduced a new hexa-core Exynos 5 series processor with Exynos 7872 featuring two Cortex A73 cores, four Cortex A53 cores, a Mali-G71 MP1 GPU, and an LTE modem that supports Category 7 with 2CA for 300Mbps downlink speed and Category 13 with 2CA for 150Mbps.

The new processor claims to bring premium performance to mid-tier device with a doubling of single core performance compared to its predecessor, which should be Exynos 5430 or Exynos 5422 octa-core Cortex A15A/7 processor. 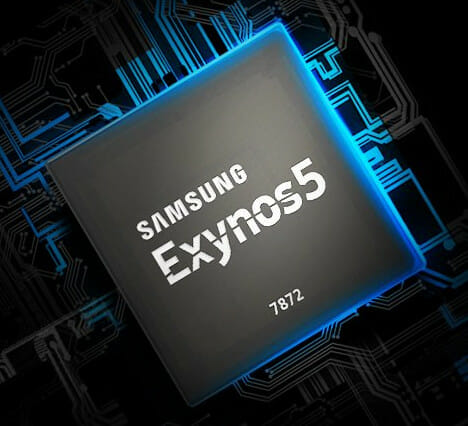 I think 5422 originally was top tier, not middle. And it’s like 3 generations old now

@Memeka
Exynos 5430 is the latest Exynos 5 series I can find on Samsung Exynos, and it’s not that much different from Exynos 5422, except for the process (20nm vs 28 nm), HEVC support, higher resolution camera, and slightly faster LPDDR3 memory (1066MHz vs 933 Mhz).

All the rest is the same in the summary.

Exynos 7872 name is a bit confusing for an Exynos 5 series though, but it would be a nice upgrade.

Anything known about Exynos 7872’s wired IO capabilities? Stuff like USB Hi-Speed or maybe even SuperSpeed?

@tkaiser
That’s a mobile chip, so they did not provide much info for this part.
For fun, I’ve searched for Exynos 5422 datasheet. Nothing. The guys on odroid forums say you need to sign an NDA to get it.

There’s not the only ones, I’ve never ever seen a Qualcomm processor datasheet either.

cnxsoft :
That’s a mobile chip, so they did not provide much info for this part.

Yeah, I know. But given the orientation on wireless capabilities it would be possible that this SoC lacks any performant USB implementation. At the bottom of the Meizu M6s there seems to be an USB-C port but USB-C with only Hi-Speed data lines exposed (and maybe alternate modes for eg. external display) is a valid use case.

I really hope the information provided there (USB 2.0 only) is wrong: https://www.devicespecifications.com/en/model/e5e9481c

I was wondering when Samsung were to introduce the successor to the 54xx series. Overall, a very conservative choice but also one that does not need to be anything else.

I’d be *very* cautious on this statement. In my various tests, I never got an A72 to run faster than an A17, the A15 is supposedly a bit faster than A17 on most workloads, and the A73 is not expected to be faster than A72 but more energy efficient. For my use cases (gcc), a dual-A72 is half as fast as a quad-A17, and I hardly imagine it would be much different here. At least the CPU supports more RAM 🙂

I wish someone made a cheapish implementation of a73 cores. Like using 28nm fab and maybe a pair of a73 cores and a pair of a53 cores to go along. And a small gpu to keep the die size down.

@willy My HiKey960 is faster than Odroid XU4 but not much. I would expect more. But problem is that both run on 2GHz
Kirin 960 should be able to run 2.8GHz but HiKey960 has ram module on top of CPU soc => no way (cooling problem)
and 2GHz is max for 5422 with active cooling/big heat sink

So ARM, AMD and Intel marketing about faster CPU is all about it can run on faster frequency.

@willy
My use case was x264 encoder
just search Hikey960 benchmarks on 96boards forum
But I disabled small cores as x264 can use 4 threads.

@m][sko
OK so finally your observations there more or less match mine, because you found that 4xA73 run only slightly faster than 4xA15 on this specific workload. A real gain coming from armv8 is crypto, but not everyone needs it 🙂

@willy The real ARMv8 gain in some compute cases is the notably improved ASIMD instruction set. While NEON has been an advanced, well-thought-out SIMD ISA from its inception, ARMv8 ASIMD (v2) introduced fp64, some much-needed horizontal ops, and even further orthogonalization of the instruction set. That, along with the re-design of the reg-file layout, helps compilers (e.g. autovectorizers) and SIMD coders a lot. My pet peeve about ARMv8 devices being “stuck” in ARMv7 land by some vendors has always been about the above, otherwise I don’t give a flying figment if my scalar int code will be 64-bit or not… Read more »

@willy For my use case (build farm), I got the best results by *not* using the A53 cores and keeping only the two A72 ones. Otherwise the A53 almost always increase build time. I ended up only using the A53 on very small files and when all other nodes are already in use :-/ I think I hate Asymmetric Multi-Processing. I saw this same behavior on RK3399. Pinning all tasks to the big cores always yielded better results. My theory is that this is due to the kernel/scheduler rather than the hardware itself. The basis for this is comparison to… Read more »

@crashoverride In my case it’s not a scheduler issue but just a hardware limitation : the A53 cores in this CPU simply are the slowest cores of all the farm, so each time they pick a task there’s a risk that everything around finishes then waits for this A53 to complete its task 😉 But even if I were running on 4xA72, it would not be faster than the 4xA17 I already have on the MiQi, which is why for me this CPU is pointless in the end :-/ I suspect ARM doesn’t see well how to improve their current… Read more »