MeLE A1000 is an Android TV box powered by Allwinner A10 Arm Cortex A8 processor that was launched in 2012 with Android 2.3, and was featured prominently on this blog, as arm-netbook then linux-sunxi community was working on porting Linux to the platform at that time.

I discovered the device after the launch of the first Raspberry Pi board, and its subsequent unavailability due to extreme demand, and was looking for an alternative which became MeLE A1000, since there was an active around the box that included a real SATA port as a bonus. Why am I writing about this today? Because the TV box just showed up in GeekBuying new arrivals feed for $29.99. 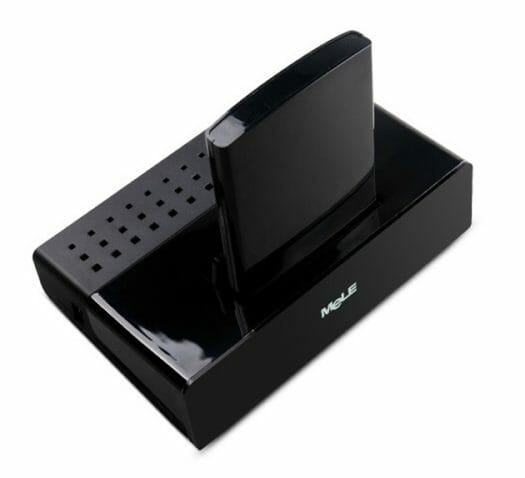 The device’s appearance has not changed, and the hardware specifications are the same too:

The device ships with a 2.5″ SATA cover, an AV cable, a power adapter, a remote control, and a user’s manual in English and Chinese. When I first reviewed the box is ran Android 2.3, but since then firmware has been updated to Android 4.0. This probably does not matter, as I’d assume anyone buying one today would either run Linux, or purchase it as a collector item. 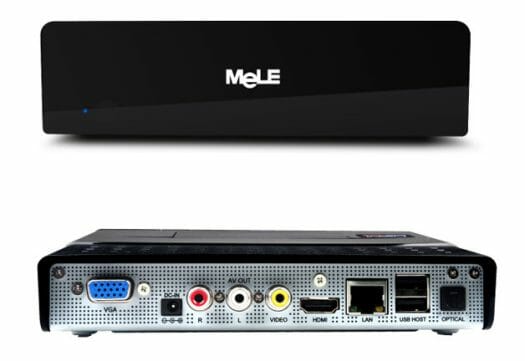 In some ways, MeLE A1000 helped kick-start the community around Linux on Allwinner work, and paved the way for cheap Allwinner solutions, and communities we have today like Orange Pi and NanoPi boards, or Armbian and RetrOrangePi firmwares.

I still have my old A1000 and was using it until recently. I probably flashed it too many times because the internal; storage has gone bad. It’s a perfectly good machine, though I’ve never forked out for anything newer and faster to compare against.

I was planning to try to get the OS onto the SATA disk and perhaps try to get something basic like OpenELEC/Kodi rather than Android. Doesn’t look like there’s a newer android image. Would be interesting if anyone else still uses theirs and/or if someone has up-to-date instructions for building an image.

I always wanted some A10 based board to complete my collection of Allwinner based boards, so take my money…

A10 ? on 2018? Why?
If I remember well Allwinner have better chips pin to pin compatible with A10.
I can’t find any reason to buy this device.

Carlos Garces : I can’t find any reason to buy this device. Easy solution: don’t buy it! 😉 I tried to order one such box (with A10 and true SATA) at the beginning of my ARM journey 4 years ago. Advertised as the right model (Cortex-A8 which means A10) I got something different: Another version with a quad-core A7 (A31), four times more DRAM and instead of ‘real SATA’ the most crappy USB-to-SATA bridge in this world (GL830, not only slow as hell but also broken since eating the last two sectors of every connected SATA device). I tried hard… Read more »

I tried hard to return my device but seller refused since they told me they had sent out a superior device (which is not true since I neither care about quad vs. single core, nor 2 GB DRAM vs. 512 MB but only about A10 + real SATA vs. most crappy USB-SATA possible).

Well I was thinking on pin to pin compatible like A20, not just newer chips.
If the reason to sell again the A1000 is reuse the mainboard design, why not use A20?

Yeah, Mele A1000. That’s what got this whole ARM thing started for me. 🙂 Still have mine. Used to have 8 months of uptime on linux.

Scroll down to devices names, https://wiki.debian.org/InstallingDebianOn/Allwinner

@Carlos Garces IIRC Olimex explained years ago in their blog that while A10 and A20 are somewhat pin-to-pin compatible they needed the knowledge about A20 differences to design boards that work with both A10 and A20 but this did not apply to older designs that were made for A10 without A20 in mind. Too lazy to search — OK, googling for what I’ve written and I get as 2nd hit: olimex.wordpress.com/2013/04/05/allwinners-a10-and-a20-are-they-really-pin-to-pin-compatible-and-drop-in-replacement/ Maybe that’s the reason for A10 again. IMO there’s not much difference between a single core A8 and a dual core A7 by todays standards (and maybe A10 affected… Read more »

@JotaMG
Sure, for a ‘working and reliable Android’ on a 30 bucks TV box in 2018 people should look for a 5 year old Allwinner SoC which is stuck at Android 4.0 and misses support for all modern codecs/resolutions instead of the obvious choice (Amlogic S905X).

“Why am I writing about this today? Because the TV box just showed up in GeekBuying …”

Maybe because GeekBuying are one of the advertising sponsors of the CNX site and CNX wants to help boost sales?

Thanks everyone in the sunxi community.

for $10 they would probably sell a lot more empty cases, which looks nice, than full devices.

Frank Septic : “Why am I writing about this today? Because the TV box just showed up in GeekBuying …” Maybe because GeekBuying are one of the advertising sponsors of the CNX site and CNX wants to help boost sales? I am happy with CNX’S approach, after all it is not like I am paying for a subscription magazine. No one is forcing to come read articles here. CNX has costs of time, resources and finding products to review to cover. I see nothing corrupt being undertaken. IMHO Also I too have mentioned Geekbuying stuff and I get bugger all… Read more »

If I recall, this also triggered porting Linux and Kodi to Amlogic (AML8723M) with Pivos making it commercial product(s) around Geniatech devices. Amlogic in that early days did not release Mali userspace libraries for Linux so Allwinner ones were used since both SoC-s shared same GPU (Mali 400).

mmm. jiji :), what memories for a linux noob like me.

I started to look this devices at 2012 from Tom Cubie who sells me this Mele , I put custom android rom from this user from http://tmerle.blogspot.com.es/ but

then I started to play with linux in this forum
https://forum.doozan.com/list.php?6
that are early talks about uboot and pre sunxi development parts
and then amery and other people created linuxsunxi,org with this mele a1000/a2000 and mk802 as development devices with other new.

Look at this cluster 😉
http://guillaumeplayground.net/allwinner-a10-cluster-mele-a2000/

so promising … and then they’ve all just gone wintel.

at least someone has to do an apu?

This can easily be transformed into a better pandora box 😉
Just add stm32duino hex dump into the
equation.

For the sake of this nostalgic euphoria, I baked latest Armbian CLI and desktop Stretch with 4.14.y kernel for this old box 🙂 Untested since I don’t have it. Those who do: https://dl.armbian.com/melea1000/archive/ @Tom Cubie Thanks

Igor big big Thank You .I recently installed ARMBIAN 5.65 stable Debian GNU / Linux 9 (stretch) 4.19.17-sunxi. Everything works very well. Because I have Mele A2000g I have 1G Ram. Can you tell me how to change your image so that Armbian can see the full 1G Ram. I am trying to compile, but it’s hard for me to be my first contact with Linux. Maybe you could also compile such a version?

Only $30 for a box with real SATA, WITH VGA OUTPUT, with proper composite plugs (not via a stupid 4-pin jack) and even an optical audio output. For certain usage scenarios this can be an amazing deal. You will not find the same set of expansion ports on any board today at this price. Not to mention it will not cost $30 with a proper case including a SATA HDD dock. AND this even manages to have a PSU included, and iirc those were solid quality as well. But seriously, this is unique and worth it even just for VGA… Read more »

@rm
As far as I can tell from here, VGA is not supported in mainline, and no one is working on it. You do, however, get HDMI support in mainline