I’ve already been experimenting with DIY smart speakers and corresponding services for example using ReSpeaker board with Microsoft Bing Speech API, or Orange Pi Zero with Google Assistant SDK. But so far all the hardware platforms I used only came with one microphone, no microphone array that help with wake word detection in noisy environments.

Last week-end, I received Espressif Audio Mic HDK, an ESP32 board with a 3-microphone array which I’ll review a in a few weeks once documentation becomes available and I clear some other items in my review list. In the meantime, I checked out the hardware, and found out the mainboard also comes with Microsemi ZL38063 audio processor specifically designed for microphone array. The chip was released las year, and can be already found in the company’s AcuEdge Development Kit for Amazon AVS, but since I’m going to use a board based on ZL38063 I’d thought to have a closer look to better understand its capabilities. 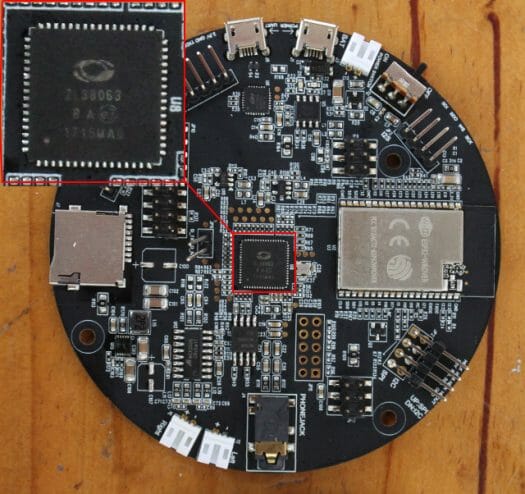 So basically, the chip process audio from multiple microphone (2 to 6), and detects voice commands. The

The block diagram also reveals the chip can be connected to speakers, and interface with the host processor over I2S/PCM to send PCM audio, and I2C or SPI for commands. It also supports an optional external SPI flash.

The chip supports Microsemi AcuEdge technology, which consists of license-free, royalty-free intelligent audio IP algorithms, and firmware can be upgraded to support specific mode of operations. The company of provides a reference design, (ZLS38508) MiTuner GUI software to interactively configure ZL38063 device with the following options:

Applications for such chip not only include smart speakers, but also smart home gateways, set-top boxes, digital assistants, basically anything that may require voice commands detection. You’ll find documentation and software on the product page, but most of it is only accessible after registration. It’s free, but you need a company or university email address, and after email confirmation wait for the company to accept your application.

Back to Espressif Audio Mic HDK. Espressif claims keyword recognition runs on the Espressif ESP32 module, so that means the MicroSemi ZL38063 chip does not perform the wake word detection by itself, but instead assists the host processor by processing the audio with specific algorithms that make detection more accurate on the host processor.

@Jon Smirl
Ouch! that’s really quite expensive for a DSP. Can’t see a lot of companies implementing it in their products at that price, even though it comes with a ready made firmware and some software.

hi i got this LyraTD too, but nothing more at this time. so searching for DSP Datasheet and so on was not really successful. did you ever get a response from Microsemi Webside? I registered on Web Login, got confirm for eMail confirm, and after this now i am waiting now 3 weeks for release note of web login. my account is still not released 🙁 if you have any further info for the ZL38063 and the Datasheet with I2C commands … please let me know . without them – LyraTD is not useable, this is the problem of Microsemi… Read more »

This is the eval kit for the ZL38063
https://github.com/Microsemi/ZLK38AVS

@rudi Yes, I got confirmation after a few days: Thank you for registering at Microsemi.com! Your account has been approved for access to MyMicrosemi You may now login by clicking on the following URL … Please Note: Selected Microsemi datasheets and documents require additional authorization for download. After logging into your MyMicrosemi account, if you still cannot download your desired document, please contact [email protected] to request access to your specific document. Thank you for your interest in Microsemi’s products and solutions. Microsemi Corporation But it does not matter, the datasheet and other documents are still protected: Thank you for logging… Read more »

Damn, I’ve just noticed that if you want to download the software/firmware, you need a separate SDS Log In (SDS = Software Delivery Server). Registration is automatic, but then you need to request for each software package, and again they ask you to wait for a couple of days.

cnxsoft :
Damn, I’ve just noticed that if you want to download the software/firmware, you need a separate SDS Log In (SDS = Software Delivery Server). Registration is automatic, but then you need to request for each software package, and again they ask you to wait for a couple of days.

🙂
we talked this just in time cause RISC V.
Microsemi using the most open Microprocessor core ever
but the documentation is one of the most closed!
crazy world.
best wishes
rudi 😉