Real Time Logic claims SharkSSL is the smallest, fastest, and best performing embedded TLS v1.0/1.1/1.2 solution. It works with ColdFire, Kinetis K60, all the Cortex-M3 and -M4 processors,  as well as Tensilica LX3 based ESP8266.

The solutions can be tuned via compile-time options to a less than 20kB footprint that still supports full x.509 authentication. SharkSSL is a commercial solution, but the SDK is free to use for non-commercial projects. 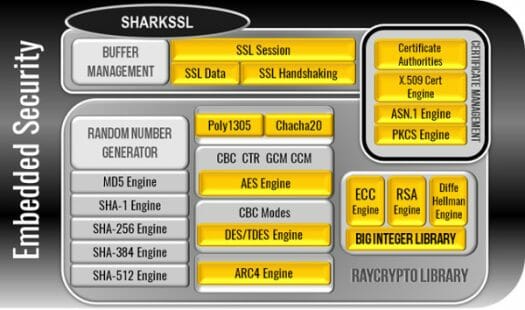 In order to simplify development on ESP826, the company has released the SharkSSL ESP8266 IDE running in a virtual machine, and providing a complete FreeRTOS and lwIP based development environment using a web based interface.

Once you’ve downloaded the virtual machine image,  you can start it in VirtualBox or VMWare with bridged networking enabled. The IP address of the virtual machine will be shown in the console, and you can use it in your favorite web browser in the host machine to start development with opening samples, and loading them to your ESP8266 board via USB. The video below shown an example controlling 3 LEDS securely.