We’ve already seen several cheap FPGA boards in the past with the $25 miniSpartan3 (Xilinx), $34 Spartixed (Xilinx), or 40 Euros Olimex iCE40HX8K-EVB boards (Lattice), but if you have a really tight budget you can now plat with FPGA for just $10 thanks to Fipsy board.

With its 256 LUTs Lattice Semi MachXO2 FPGA, you’ll be limited to what you can do for specific projects, but it could be useful to teach yourself or students FPGA programming, especially it also happens to be breadboard-friendly. 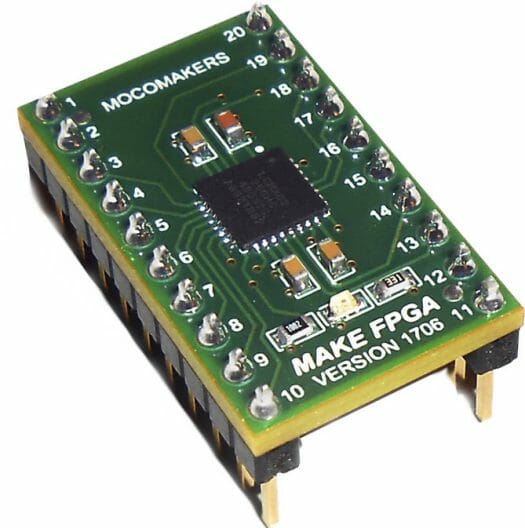 The “Basic Setup” tutorial explains how to create a Blinky example, by first creating a JEDEC file in Lattice Diamond software using the provided source example, before uploading over SPI using a Raspberry Pi board and fipsyfpgaloader utility.

Beside teaching/learning, the board can also be used as a I/O Port extender, the glue between different embedded systems, a digital bus controller, a PWM controller (e.g. for LED panels), etc…

The board has been launched on Kickstarter, and the campaign has already surpassed its $3,500 funding target. Pledges start at $10 with two (yet to be soldered) headers, or $20 with soldered headers. The are also pledges for up pack of board, but you don’t really save (except maybe on shipping) if you order bundles as a pack of ten costs $100. Shipping adds $1 to the US, $5 to Canada, and $10 to some European countries and Australia for a single board. You’re out of luck if you are based in South America, Africa, or Asia since the developer won’t ship there. Delivery is planned for June 2018.

The datasheet linked in the specs refers to MachX02 chips as FPGAs.

hmm, actually they also refer to MachX02 as PLDs. Looks like the FPGA/CPLD line is blurred a bit with this family.

Yes. And Altera MAX was CPLD before but now the high end of MAX family is FPGA as well…

And also Altera MAX seams to be Flash based, earlier only actel/microsemi produced Flash based FPGAS?

How is something that blocks most of the sockets in a breadboard ‘breadboard-friendly’? If you want to be breadboard friendly, then only plug into the inner 0.3″ rows of pins and don’t block the rest.

Meh. 256 LUTs. You’d be better off using an ICEStick or one of the iCE40 type breakout boards…or better yet, an Arty S7, for this task.

There is very, very little you can accomplish with 256 LUTs in the FPGA space. This is more a low-end CPLD.

So “MOCOMAKERS” is sure to make some giggle.