Chumby NeTV was an open source hardware Linux IPTV media player based on a Xilinx Spartan FPGA and a Marvell Armada 166 processor, and unveiled in 2011. Many years have passed since then, and now Bunnie Huang has come up with a new version.

The NeTV2 development board is also optimized for open digital video application, but based on a more powerful Xilinx Artik-7  FPGA, and a Raspberry Pi 3 B+ can be added for things like seamless JTAG configuration and overlay video generation. 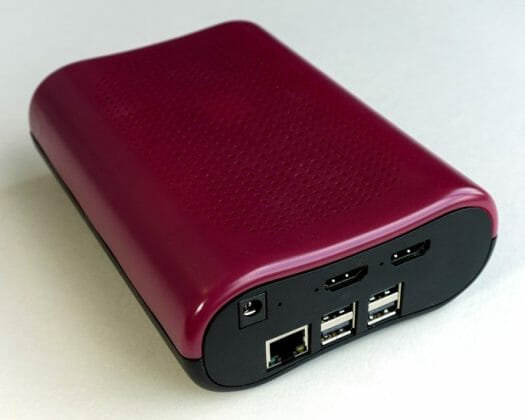 The system is optimized for use with migen/LiteX, an open source Python-based hardware description language that works with Xilinx’s tools for synthesis, placement, and routing.

The NetTV2 works has two modes of operation selected by jumpers:

If you are based in the US, the capabilities of the platform are however limited for legal reasons, namely section 1201 of the DMCA that make it illegal to circumvent the protection on encrypted video feeds, even for your own private use. So for example, while using NeTV classic mode described above, while it’s possible to overlay opaque text on the video, it’s not feasible to add text with a transparent background which would require decryption the video to apply alpha blending. The EFF, Bunny Huang and others have however filled a lawsuit to change the situation, so we’ll have to see how it goes. Bunnie goes into more details about it in NeTV2 announcement blog post.

NeTV2 has been launched on Crowdsupply with a $15,000 funding goal. Rewards start at $200 for NeTV2 board only with XC7A35T FPGA, but so far the most popular perk is the $320 “NeTV2 Quickstart Package” which adds a Raspberry Pi 3 B+, an 8 GB microSD card with pre-loaded base firmware package, a power supply, a custom HDMI Flex Jumper, with everything  assembled into the red and black case shown above. Shipping is free to the US, and adds $30 to the rest of the world. You’ll have to be patient, as the solution is only expected to ship by the end of May 2019.

So this is (obviously) perfect for HDMI/HDCP spoofing/stripping/cracking? If yes then Bunny Huang, by just selling this device openly, is going to be breaking lots of laws in lots of places no matter what he claims in the Terms of Sale. So unless he lives in China, Russia, N. Korea, etc., he might find himself in a courtroom. Even if he does live in say, China, he better not travel outside that country any more. Anyway, relatively cheap PC software HDCP strippers already exist. (You just have to search for them, be prepared to pay in crypto-currency, make sure you… Read more »

AFAIK you don’t have to actually decrypt to be illegal. Just aiding (abetting) illegal decryption by a physical device for sale is enough. Even if you disagree, many (if not most) laws written in this area are vague enough to allow a competent deep-pockets Law Firm to either convict an average person in a criminal court, or (at-least) sue him or her into bankruptcy in a civil court. If the HDMI Forum goes after Mr. Huang (a big IF), this isn’t going to be like the MPAA trying to sue millions of pirate MP3 downloaders. This is going to be… Read more »

Nobody Of Import
Drone

Someone ought to let Xilinx know they’re in violation of the law. All that thing happens to be is a straight-up HDMI support Artix 7 eval board from one of the vendors, stacked in on top of a Pi3+ $200-300 gets you an eval board not much different from that one and with the right fabric. It’s bullshit and there’s quite a bit of question about the Constitutionality of the law in this case, hence the EFF’s involvement. In fact, I consider myself at risk since I work with FPGAs and I had other aspirations to HDMI in the form… Read more »

Then they better start taking down large sections of the information internet!

@Drone, you must be fun at parties.