It’s been possible for add multiple WiFi routers and/or WiFi repeaters in order to provide good coverage in a house / building for years, so this required some manual configuration. So in recent years, companies came up with WiFi mesh networking solutions that do very much the same, but are easier to setup, and – as I understand it – mostly plug-and-play.

Some examples are Google WiFi router or eeRo Pro WiFi system,  but apparently so far every company would do their own proprietary WiFi mesh implementation, so you would not be able to mix brands for such features. That’s why the WiFi Alliance worked on, and now announced Wi-Fi EasyMesh, an industry standard  for “simple to use, self-organizing, smart Wi-Fi networks”. 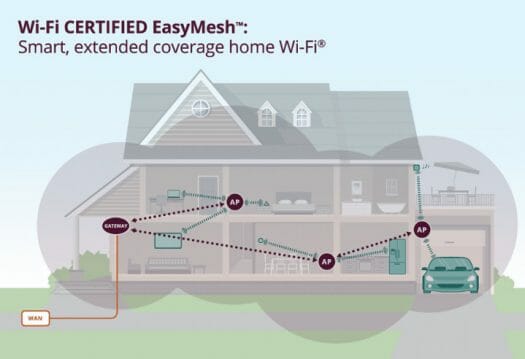 Key benefits listed by the organization:

The last line is the key point, as that means you’ll be able to buy any WiFi EasyMesh certified router to extend to your home / small office network, provided your existing router is also compatible with EasyMesh.

We’ll have to see how enthusiastic router manufacturers will be with this new standard, as Liliputing points out that most testimonies in the press release are from silicon vendors such as Broadcom, Intel, Marvell, Mediatek, and Qualcomm, as well as some lesser known router manufacturers. If they are willing, Google, Asus,  eeRo, and other companies with WiFi mesh routers could still implement the new EasyMesh standard, while keeping their proprietary implementation for backward compatibilities with their older devices.

More details can be found on WiFi Alliance website, or for technical details, you may refer to  Wi-Fi Alliance Multi-AP Technical Specification currently in draft form.

It’s very good the this standard was formed.
When would the first products supporting it be released?

Nobody Of Import
Ron

Actually, it’s **LAME** that it was formed. Betcha didn’t know they had mesh and easily set up mesh as part of a prior 802.11 standard? 802.11s is mesh. The router vendors just never IMPLEMENTED it. Not because it was hard, not because it wasn’t usable (It’s suboptimal compared to BATMAN-Adv, but that’s not as bad as you’d think). It’s because the jokers wanted to own the whole for themselves. And this will probably go as well as 802.11s went- probably be rejected even HARDER because it’s convoluted and overengineered on top of being redundant over a simple, decent protocol they… Read more »

Nobody Of Import
Ron

The only thing it brings to the table that isn’t in 802.11s is roam capabilities. But…heh…like everything else, it was beat by a defacto standard out of box…

BATMAN-Adv combined with 802.11s with the routing function turned off on each of the WLAN NICs results in the very thing they “standardized” and it’s easy. But that would require each of the OSes to support it or to move BATMAN-Adv in as a standard, supported in the drivers. Hence this “standard” that the router vendors won’t support any more than 802.11s before them (which they COULD have. X-D

What about usability? Does it uses the same radio and switches back and forth between serving client and forwarding to the next hop? That halves bandwidth. On each hop. I can not even download specification, it requires something.

“That halves bandwidth” it is worse then that. The radio tends to adapt to the worst bitrate of the worst neighboor. So if you have a neighboor in 1mbps and a neighboor in 54mbps, the 1mbps node will drive down the whole link.

I have pushed for the -z flag in babeld routing daemon to add a penalty if you want to route on the same frequency for that reason.

Curious. Can’t we just use OpenWrt/ LEDE plus some BatmanAdv plugin for easy mesh networking?
And also take care of the worst bw link problem by some switch? Why pay $100s to your friendly vendors with some unannounced lock-in when you could simply use existing cheap routers to do much more on your own?