Soap is a strange creature, and I’m not convinced there are that many use cases for such hardware, but I find it interesting that the developers decided to pack a Freescale i.MX6 Solo/Dual or Quad SoC powered Android 4.4 tablet and a router supporting five Gigabit Etherner ports, as well as WiFI 802.11ac, Wi-0Fi 802.11 b/g/n,  Zigbee, Z-wave, Bluetooth 4.0 (BLE), Insteon RF, X10, 433Mhz, NFC, and infrared into one and only device which they call an “Intelligent Home Management Hub”.  It’s also complete with an HDMI output port so that you can use it as a media player. 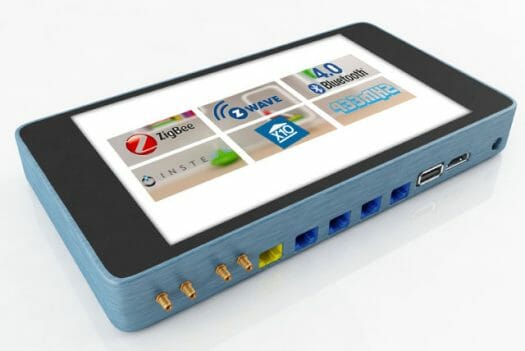 Let’s go through the specifications for the four version this little monster (Soap Solo, Soap Dual, Soap Quad, and Soap 8.4):

The Freescale i.MX6 is brought to the device via Congatec SoM, probably their conga-qmx6 Q7 modules. Beside the Android kitkat tablet, router, home automation, and media player applications possible with this device, the developers are also promoting the device for its parental control abilities, controlling when you kids can play games by the touch of a button, preventing them to access not-safe-for-kids websites, and so on.

The project is now on Indiegogo (Fixed funding) where Soap’s designers plan to gather $42.000 or more to start production. Soap Solo starts at $240, Soap Dual at $280, Soap Quad at $360, and the most expensive option, Soap 8.4, will go for $500. Shipping to North America is $6, and $35 for the rest of the world. Delivered is scheduled for February 2015. Please note it’s not the first time the project is crowd-funded, as it was on KickStarter last March with perks at a much lower price point.

Via Hack a Day

Almost perfect Tor/Privoxy home proxy server. Strange that they don’t include such purpose built Linux distro for that function alone.

Too bad it costs a tad too much for such fixed FLOSS function, as application specific hardware really should cost near nothing, especially if it would enable people forget about them (become transparent for user).

Why existing router mfgs refuse to acknowledge the market is nothing but political nonsense between the Govs and corporations, bad guys vs bad guys, always very logical. 😉

Thus a new entity doing them would be perfect.

Please dont use “is”. This router DOESNT EXIST. Its a scam.