If you don’t like getting tracked or see ads, it’s normally easy enough to install an ad blocker plugin in your web browser. But if you want to save some resources on your computer(s) and/or prevent online ads on other devices – including TVs – on your local network, it’s possible to do so via an external device / router using software such as Pi-Hole that can be installed on a Raspberry Pi board (or other Linux machines) in order to filter ads before they even get to your computer. 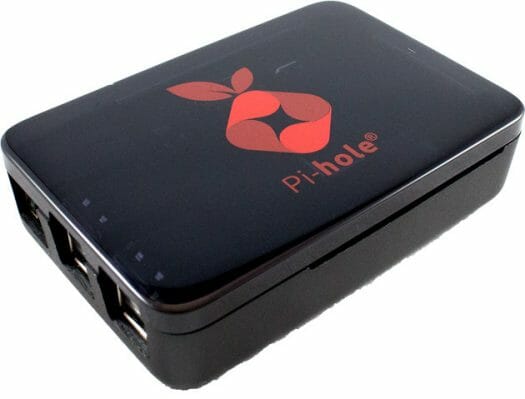 This would normally require you to get your own hardware, enclosure, flash the firmware on a board, and install Pi-Hole yourself. That should easy enough for most regular readers of this blog, but there’s no an option for less tech-savvy user, as Pi Supply and Pi-Hole have partnered to launch the Pi Hole Kit with everything in one packages and already setup.

The kit contains the Pi Hole box, a one meter Ethernet cable, a 2.5A international power adapter, a 16GB microSD card with Pi Hole software, and an HDMI cable.

Ad blocking is done at the DNS level, so while Pi-Hole is already installed, you’d still need to change your router’s DHCP options to force clients to use Pi-hole as their DNS server, or configure each device with Pi-Hole as DNS. First time configuration is also done on the command, and the Pi-hole list can be updated, but not automatically, only from the command line. So yes, it’s easier to use, but not foolproof.

Buying an Orange Pi Zero or NanoPi NEO with enclosure and PSU for less than 25 bucks and combining this with a SanDisk Ultra A1 SD card for approx. 10 bucks and you end up with something performing similar or even better than the above kit. Well, there’s ‘more’ to do. You need to download/burn Armbian Stretch on your own and then execute armbian-config and navigate to ‘Software –> Softy –> Pi Hole’ also on your own. And some people with ‘verbose’ devices on their LAN reported running in troubles due to Pi-Hole doing excessive logging which doesn’t work well… Read more »

My nanopi neo does the job very well. There are no fancy graphs. Armbian and dnscrypt-proxy with ad blocking enabled.

Well, I do the same (and a Domoticz server) with my 16€ Sunvell R69 with armbian (no need of SD card after install as system is moved onEMMC). A lot of money for an ethernet cable..

Here is a March review, with that crap WiFi chip. Buyer beware:
https://h3droid.com/blog/sunvell-r69-my-adventures-with-a-cheap-tv-box

IMHO, you are better off with an equally priced S905W based box. Besides the crap design anyway, Allwinner sucks with video acceleration too!

For a DNS server, I obviously use an ethernet connection. And why should I care of video acceleration for an headless server? Anyway, I do not say it’s the best option, only that this Pi-Hole kit is overpriced.

I want to do the same thing with my “K1 plus”. Can you share some info or link to “How to”? Thank you.

Just read above. With Armbian it’s just armbian-config –> Software –> Softy –> Pi Hole 1 armbian-config –> Software –> Softy –> Pi Hole Of course you should be able to install pi-hole in a similar way on every Debian (Stretch) based Distro but with Armbian regardless of which device/kernel is used stuff like CPU temperature shown in Pi-Hole’s dashboard is working (since we did a minimal cooperation here). BTW: A NanoPi K1 Plus is way too oversized for running Pi Hole. My installation runs on a NanoPi NEO with 256 MB RAM and CPU cores limited to 816 MHz… Read more »

Sorry I was not more precise, I have “K1 plus TVbox. I have one spare with no use so I was thinking to use it as pi-hole. I like solution without memory card. Set and forget 🙂

You need to look/ask for yourself whether this TV box is supported by balbes150’s great Armbian images: https://forum.armbian.com/topic/2419-armbian-for-amlogic-s905-and-s905x/

If your router runs openwrt that can also do the job. Of course a cheap SBC has more RAM than your router so can hold a bigger table of entries to boot into oblivion. To each their own.

But why not use a DNS server with adblocker? There are many and no cost
Just at ip number to router or pc/Android device done
Or use app DnsChanger

it also shows you all the dns requests on your network, which is pretty cool.

Probably because you’ve got no control over that server. It can be the reason.

Does this work for my Ubuntu machines? AFAIK they do their own resolving, with their own local nameserver.

Yes, you just need to change DNS settings in your router and/or clients.

And how does your own local nameserver resolve things? It asks the upstream server, which can be this pi hole.