Most are designed and manufactured by companies, but in order to bring more (individual) open source hardware developers on-board, the 96Boards Community Mezzanine initiative was launched to bring industry representatives and community members together.

The idea is to encourage people to submit their KiCad/Altium 96boards’ mezzanine designs to the github repository, and the manufacturing costs of the most popular designs can be lowered  by offering them through GroupGets group buying platform.

The first of those boards to be launched is 96Boards GPS Mezzanine with the following specifications for the R1 board: 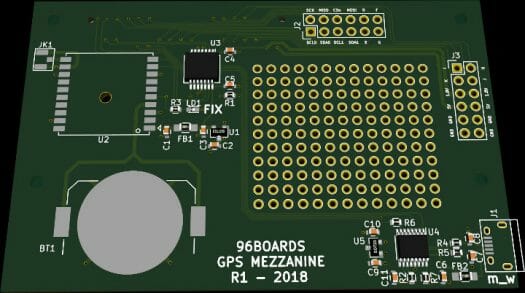 Some of 96Boards already have GPS, but the mezzanine would be bring such capability to any 96Boards CE compliant hardware, since it’s connect via the 40-pin low speed connector. You’ll find the KiCad hardware design files on Github.

If you are interested, you could reserve one or more boards for $75 each, and manufacturing will carry on if the number of reservation exceed 25 boards.