I would consider purchasing a computer without SSD anymore, at least to install the operating system, and store things like email databases and web caches, since it makes a huge differences in terms of performance compared to traditional mechanical hard drives.

That extra performance comes at a cost however, as SSDs have been much more expensive than HDDs, and still are, but costs have come down a lot. If you’re looking for an SSD with a fairly large capacity, Tigo S300 might be worth considering with the 480GB SSD now offered on GeekBuying for $79.99 shipped with coupon TXHIHAZC. 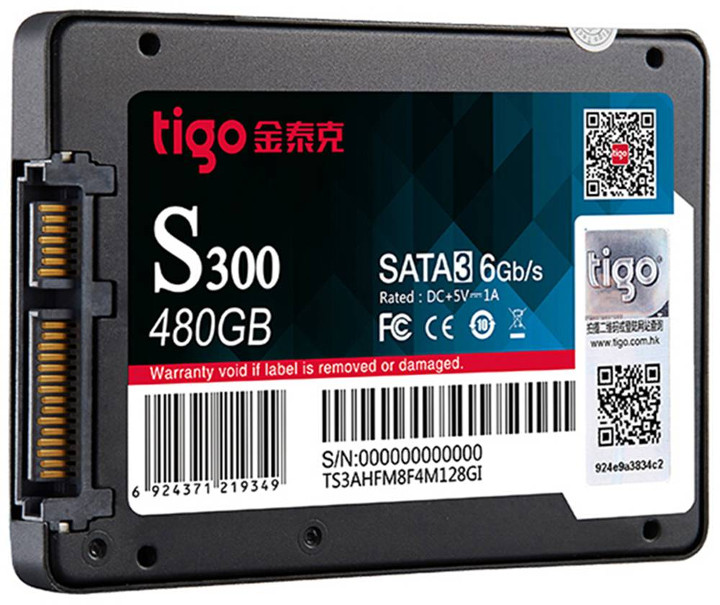 Specifications listed for the device: 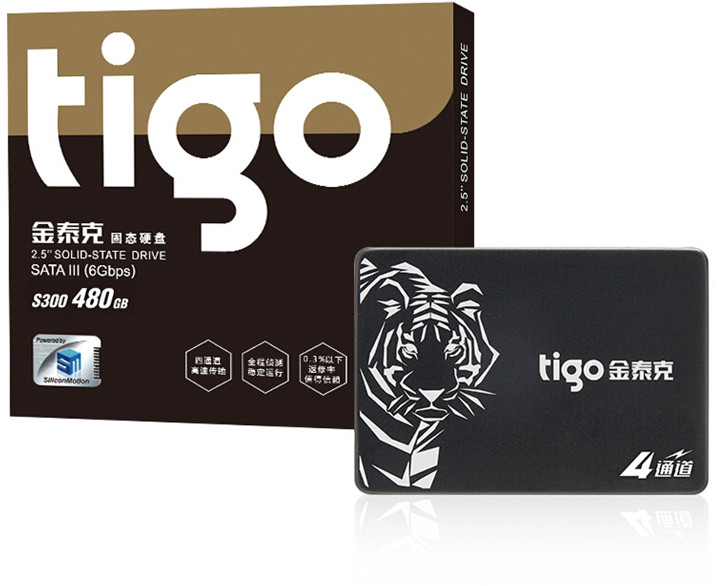 Related to the “Warranty void if label is removed or damaged” shown in the product picture:

https://www.ftc.gov/news-events/press-releases/2018/04/ftc-staff-warns-companies-it-illegal-condition-warranty-coverage
“Unless warrantors provide the parts or services for free or receive a waiver from the FTC, such statements generally are prohibited by the Magnuson-Moss Warranty Act”

i wouldnt consider kingston for any flash storage, they got cheap, slow and unreliable past the few years.

Why do people buy noname crap like Tigo, Intenso, Kingston? There are some companies owning NAND flash fabs, build their own controllers, have in-house knowledge and assemble all this stuff to retail products which known characteristics (e.g. SMART attributes that can be interpreted in a sane way, life expectancy due to independent reviews that happened already and so on). And then there are Tigo, Intenso, Kingston and the other noname guys who buy cheap components on stock markets, assemble them and sell something with faked/unknown SMART values and soon most probably also faked capacities (‘fake flash’ already arrived at the… Read more »

“Why do people buy noname crap like Tigo, Intenso, Kingston?”

Why do people buy Chinese low quality products, made with the cheapest available components, and often manufactured in factories causing serious pollution?

Because they think they are getting an amazgin bargain at such an apparently low price.

Some people know the price of everything, but do not know the value of anything.

Somebody on G+ mentioned fake hard drives… I had never seen any, but apparently somebody made a fake 2TB Samsung 2.5″ drive with a USB flash drive. https://youtu.be/kE2BvMrwbl0?t=1m25s

Google image search for ‘fake hdd usb drive’ shows more of these nice HDD fakes. And with SSDs it’s even simpler since all you need to fake a renowned one are packaging, the sticker you put on the chips and some firmware bits. Web search for e.g. ‘counterfeit evo 850’ will reveal some details.

It’s start with unboxing and teardown, but if you scroll down enough there are seq and random read/write numbers like the one below.
http://wx1.sinaimg.cn/large/699093edgy1fow2ys8vf0j20kc0eb75g.jpg

The SSD is advertised to use a Marvell controller but what’s inside: Silicon Motion (SM2258G) instead. Who knows whether SMART readouts are real or fake? Who knows how performance will decrease over time? Who knows how large the overprovisioning area is and how wear leveling and garbage collection are implemented?

I never buy anything but enterprise grade SSDs with PLP. Examples of SSD i have in my servers: Intel S3700 400GB, S3500 300GB, Samsung PM853T 960GB, Hitachi HUSMM1680ASS200 800TB and Intel P3600 1.6TB . Even have a couple of Intel 320s yet (not yet hitting the 8MB bug though). Of course my use cases are different than a simple laptop, but still i’d prefer these (except the SAS ones ofc) that has the right format for a laptop. For my laptop i actually have incoming MICRON 512GB SATA SSD 1.8″ MTFDDAA512MAR. And these cheap SSD would likely struggle heavily when… Read more »

IMO you don’t need to buy enterprise SSDs for home usage (typical desktop/mobile use cases) but at least switching on the brain should be the first step when buying any SSD.

so the drive arrived, 10days shipping, not bad. as expected ultra cheap, quite slow, ~7k iops, fake/crippled smart, the usual. here is the benchmark result: https://imgur.com/a/NZoGW6h

hahaha. i’ve asked for getting suckered and drive delivered. it died today, i was expecting few months, not just a tiny bit over a month since arrival. just a tiny bit to NOT be covered by free-return-shipping policy of geekbuying. let’s see how well they handle bad potatoes.

2018-09-20, story continues, replacement drive has just arrived. shall i resell it to some other sucker or try to use again, decisions, decisions!

Continue to use it and document your adventure on a blog! So far numbers are impressive

since it failed after 1 month, i had to pay to ship it to them (~7usd). they’ve shipped new one back to me for free though. interesting twist will be further developments, on the box it claims ‘3 year replacement’. i wonder how that part would go 😉