A few companies have started or planned discounts for April’s fool, Father’s day, and maybe even March Madness, the basketball tournament currently taking place in the US.

GearBest launched their “March Markdowns” event occurring between March 16-31, and offering 81 discounted items, a spin the wheel game where players can win a One Plus One smartphone, two ZTE Blade S6 smartphones, as well as some other smaller items and discount points. 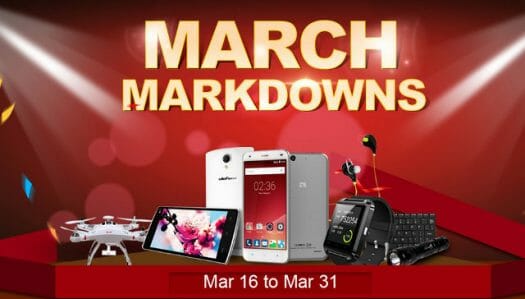 They have deals for smartphones, watches, RC cars and quadcopters, mini PCs, and other accessories.

Some interesting deals for Android media players include:

You can also try to use GBCCN coupon to get 10% discount. This is however not cumulative. For example, Ugoos UT3S will sell for $116.80 with the coupon.

Meanwhile, Geekbuying also have their own April’s fool festival with discount for scary gadgets, RC toys and smartphones, but nothing for mini PCs. They also have a Coupon Zone with some interesting deals for development board like Firefly-RK3288, Radxa Rock Lite, Orange Pi, and Raspberry Pi 2 Model B, as well as Zidoo X9 media player & recorder, but unfortunately the coupon were short-lived as they already expired. I’m not sure if it’s a page to monitor for further deals, or this was just a one off. You can still get Zidoo X9 for $115.99 with the older BFCIGPHO coupon.

If you had your eyes on MeegoPad T01, but were waiting for a small discount, I’ve been informed Meegopad T01 with 32GB eMMC can be had for 5% discount (~$105) with “3MiniPC5” coupon on DealExtreme. It might also work with other SKUs, but I have not tried.

Finally, WeTek is planning a 24-hour discount for Father’s day on March 19, 2015. They’ll provide a code on Facebook and other social media platform to get 20% discount and free delivery on WeTek Play Android set-top boxes and accessories purchased on WeTek.com.