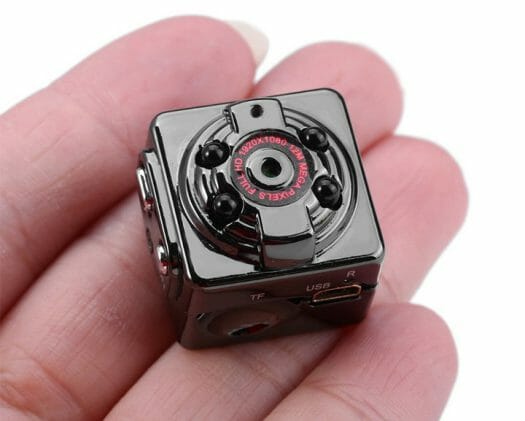 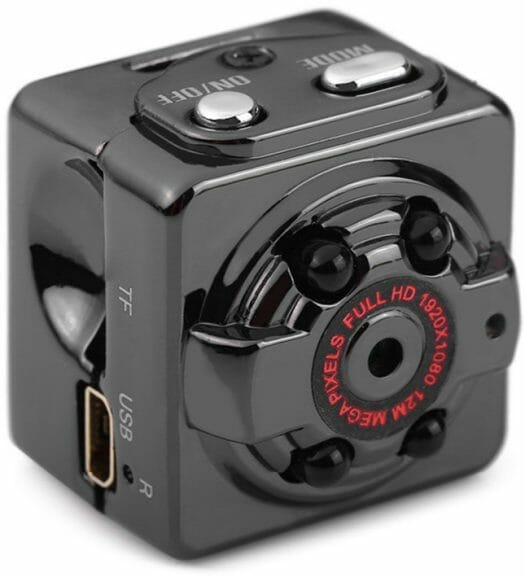 The firmware supports car DVR function, “circulate record function” to record video every 5 minutes and overwrite all video(s). The mounting clip can be used to attached to your clothes, backpack, back of cap, etc… Bear in mind the camera has no waterproof rating, so it may not be safe to use when it is raining, and it should certainly not be immersed in water. The “mini Car DVR camera” ships with a USB / TV out 2-in-1 cable, an adjustable mounting bracket, a mounting clip, and an English user manual. 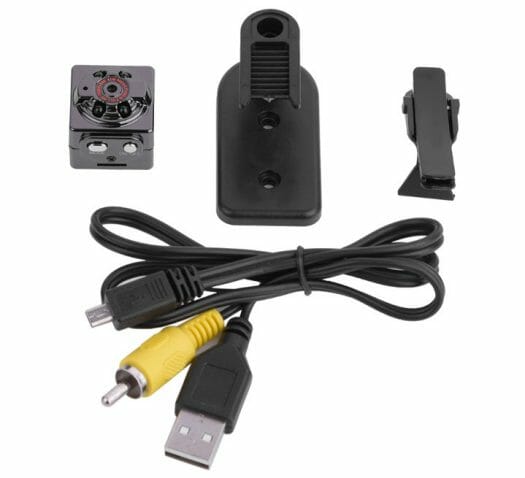 SQ8 camera may be new to me, but the product was actually released in 2016, or about two years ago, and there are several reviews on Youtube, including the one embedded below that after the unboxing part shows some videos sample from the camera while used as a bodycam or a car DVR. I have to say the quality is not that bad.

Beside GeekBuying, you’ll find the camera on other websites too like Amazon or GearBest, but usually a little over $10. The Amazon reviews are not really reassuring though, with lots of one star reviews saying the camera only worked one day… There are also newer models with SQ11 that looks a little better (esthetically) and sells for as low as $9 including shipping, as well as  SQ12 camera which comes with a waterproof case for $16.99 shipped.

Could you tell something about the DVR mode? Otherwise to use it as a dash cam you have to turn it on manually.

They say it starts recording as soon as the camera is connected with the car charger. You’d need a separate USB adapter though.

Beware that there are multiple issues with this hardware – very often the supplied cable is defective and it cannot charge the camera, and in addition, it short circuits the USB supply lines. If you are lucky you will get a notification message from the PC OS about this, if not or if you try with some 5A+ charger you might get a fire. Solution is to find old Nicon digital camera USB cable as replacement – because the jack is neither mini nor micro USB – it is “Nikon” style. Battery life is also questionable – maybe there are… Read more »

I would second you from my experience with SQ12 bought for $12.50. It’s true 720p and upscaled to 1080p but the picture is not stellar in any mode. It’s hard to guess plate numbers so useless as car dashcam if you want to record accidents of course. It’s hard to use with Linux also (at least on my Orange Pi PC with Armbian) as the camera is not recognized because of USB quirks mode. On PC it was working without need of drivers with Windows 10. I guess this SQ8 will be inferior in all parameters than SQ12.

It took me days, but I did get one working with a linux SBC… but sadly I don’t remember exactly how. It did relate to editing something to do with quirks. I currently have one acting as a webcam (1 picture every 5 minutes) to keep an eye on a pet. Has been running for about a year.

Found it, the command that got it working was :

Have you found a camera you do like? I’m looking to do a similar setup of a dashcam on armbian but the sheer number of camera options always stops me.

and it runs hot as f…

This shouldn’t be underestimated. Camera modules need good cooling, especially if you don’t control them directly and are at the mercy of whatever controller sits between the cam module and the rest (USB/sd card). You will not get access to PLL settings over UVC driver, so if the frequency is too high, your only choice is to add your own cooling. I bought a “notebook” cam module and by default it gets to 70°C or more indoors. Can’t imagine it runnin in the car, where it can be exposed directly to the sun at times, etc. Of course the image… Read more »

I can second this. I bought one of these and it never worked. When I plug it in to charge it just becomes extremely, burningly, hot. It was a waste of money and time.

Interesting specs for the $9-10 price.

1. What is the output: YUV or h264 like? Compression matters a lot here…

2. That USB to TV out cable: what is the software driver that outputs analog TV signal, at what res?

Wiki is helpful. It says that Linux does not yet support mpeg2 or h264 in UVC1.5 yet…

…it should be obvious that you can only expect a pile of garbage. But people seem to love the ‘buy cheap, buy twice’ principle eagerly helping to create more and more electronics waste.