Some applications like digital signage and video surveillance may require simultaneous video playback, and encoding to send over the network. ARM platforms may not be powerful enough to achieve those tasks with the processor only, but luckily many ARM SoCs include powerful video processing unit (VPU) capable of doing both hardware video encoding and decoding, leaving the CPU cores mostly free for other tasks. 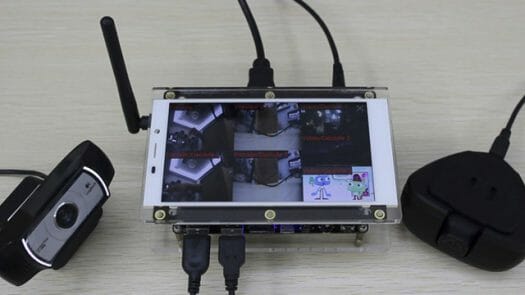 Firefly team has demoed such capabilities on their Firefly-RK3288 development board by displaying 7 videos on a single screen, including two previews from two USB cameras attached to the board, which are then encoded and decoded on the fly and displayed on the screen. The last three videos are played from 3 different files. So that means that 5 video decode and 2 video encode are running simultaneously.  The board can achieve 26 to 30fps with 720p videos, and around 13 to 15 fps with 1080p videos in that demo.

The demo was published in September 2015, but I just found out about it via one Rockchip tweet, which claimed “Multiple video coding&decoding case of Firefly-RK3288 is open source for maker now!”. While the demo firmware with MultiCodecs app is available from Firefly website, I did not find any source code, so I asked on twitter… To my surprise I got an answer with a link to download 多路编解码.zip   (password：qtsr), with source code for MultiCodecs app (with some close-source binary libraries), and to control the UVC cameras.

Google translation of the readme file:

Replace libRkOMX_Resourcemanager.so:
Android 4.4 can patch: 0001-Android-vpu-omx-support-5-decodes-and-2-encodes.patch
Other versions can be replaced manually own respective positions.

Then you have to prepare three mp4 format video, named video1.mp4, video2.mp4, video3.mp4, and copied to the board /mnt/ sdcard/ below.
Uvc then plug in two cameras, run MultiCodecs, will be able to see the effects..

So you could try by yourself using Android 4.4 for the board, adjust the app to your needs, or integrate the solution into your own app.

The source code archive link is broken. Could you upload the archive somewhere?

@GLaz
It works for me. Have you typed the password, and then clicked on the Download button (grey button on right of blue button on desktop).

@Jean-Luc Aufranc (CNXSoft)
Thanks. It has worked this time.

Shows that RK3288 still is the King of the Chinese Android TV Boxes (I don’t count shield in).

Kinda sad considering its a 2 Year old Chip and Amlogic is pressing out Turd after Turd.

One thing where Amlogic is miles ahead though is software….Rockchip still hasn’t got their shit together software-wise. Without the great work of Modders of at Freaktab most of this boxes would suck…