The plan was to launch the board in May or June for around $100. Sadly, the board has been canceled for reasons we’ll explain below, but the silver lining is that a more powerful ODROID-N2 should become available by the end of the year. 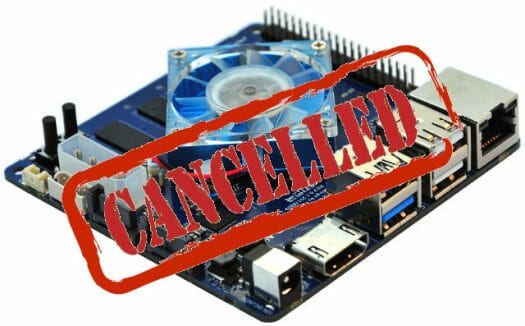 The reason for the cancellation is all explained in a forum post in ODROID forums:

After announcing the N1 board in February, we started to prepare all the components for the mass production. But Samsung and Hynix suddenly informed us 1GB DDR3 chip was End-of-Life phase and we couldn’t place any order. It meant we could not make 4GB model since there must be four DRAM chips mounted on the board.
We could make a 2GB model only with four 512MB DDR3 chips. But it couldn’t make any big difference against the currently popular XU4 board.

So we must redesign the PCB with LPDDR4 chips and it might take a couple of months. Unfortunately, LPDDR4 lead time was also a few months due to the DRAM market shortage issue.

OK, so in theory we could all wait for a few months to get a redesigned ODROID-N1 board with 4GB LPDDR4, but this won’t happen because a new faster processor is coming around that timeframe as further explained:

At that time, we heard a news about newer SoC will be available in September with faster CPU/GPU cores and native DDR4 support from other SoC vendor. Some early engineering samples will be ready in July and we can start our internal evaluation and development from the middle of July. Normal DDR4 lead time is much better than LPDDR4 certainly. We already started a new PCB design for the new SoC.

It was the main reason why we had to suspend the N1 project and considered the N2 project. Our average board life cycle must be 4 years at least. So 5~6 months of delay shouldn’t be a big problem hopefully.

At this moment, we can NOT disclose the information about the newer SoC due to the NDA with the chip manufacturer. I think we can unveil the N2 specification and test results by end of August and start the mass production in September.

So we won’t know the full details until August. But let’s speculate a bit 🙂 Based on the wording of the announcement, it won’t be a Rockchip processor. Hardkernel has so far made boards based on Samsung Exynos and Amlogic processors. It’s always possible they went with a new silicon vendor, but often you’d prefer staying with the same manufacturer if they offer the right part, since you’d be already familiar with the company and their development environment. Samsung processors are quite expensive, and probably hard to get, so I strongly suspect ODROID-N2 will may be the first Amlogic S922 development board. We do not need the memory interface, but the processor will come with eight next gen Arm core (likely Cortex A75/A55),  dual 4K UHD encode/decode, PCIe and USB type C interfaces, and MIPI DSI / CSI camera and display interfaces, so it looks like  a good candidate to be found in ODROID-N1 replacement.

As a side note, while we have lost an interesting RK3399 board this week, I’ve also learned about two new ones in the work: Raspberry Pi shaped NanoPi-M4 from FriendlyELEC, and Libre Computer Regenade Elite (ROC-RK3399-PC) scheduled to launch in July on Indiegogo. I’ll write more about those once they become available.

Thanks to Ian Beckett for the tip.

S922 I really hope so!
Holding out to be able to watch Dolby Vision content without having to use a 4k Bluray Player. Xbox One not supporting Dolby Vision is a bummer.

that’s also my guess, it should probably be amlogic S922 :
– hardkernel is used to work with this company
– the NDA thing fits with this SoC (*announced* in 2018 roadmap but no more information since then AFAIK)

unfortunately, in my opinion, the way they deal with software support is much worse when compared to Rockchip

If it is S922, it is highly unlikely to be in that time frame. It usually takes a year between announcement and availability.

Oh that’s sad because it was a modern design, not relying on whatever-over-USB, and the board was really clean. Given that they finalized the design, I think they should still sell it and indicate that it doesn’t have a long term supply. I’m pretty sure that many enthousiasts would be happy with this anyway given that it’s what most other vendors do all the time. Now if we can get a CPU with more than 2 big cores, it would be really nice. The problem I’m having with the RK3399 is that the two big cores deliver the same performance… Read more »

> I think they should still sell it

I second that. Even with just 2 GB the N1 would be a nice board if being priced competitively (I would assume that’s part of the problem: the N1 is ‘just another RK3399 thing’ so potential buyers compare with other vendors. And many customers might get that software support depends on the SoC and is not bound to the specific board in question)

According to its specs RK3399 already has LPDDR4 support. Anyhow, Hardkernel would have to redesign the board, so apparently that aligns with a window for a SoC upgrade*. We could say that DDR3 was a strategic mistake. But N1 was a really nice board, according to many ‘eng sample’ owners out there.

> According to its specs RK3399 already has LPDDR4 support

Why should this happen? Why big.LITTLE in a TV box SoC made for clueless consumers who look only at the count of cores instead of performance?

Why shouldn’t it be a little.LITTLE design again as with S912: 8 slow cores, 4 of them artificially being slowed down for no reason which severly impacts performance: http://forum.khadas.com/t/s912-limited-to-1200-mhz-with-multithreaded-loads/2311/79?u=tkaiser

I think Amlogic S922 may not only be for TV boxes. For example, there’s a MIPI DSI interface, why would they add this to a TV box only chip? That probably means the processor will be used in tablets and laptops too.

So what do we know about this SoC yet? 🙂

BTW: Just zoomed into the PNG on your S922 introduction. The logo shown for S922 reads ‘8core’ and ‘Cortex[TM]-A55 CPU’ (could also be A53 but this would be in contrast to the ‘Next Gen ARM CPU’ claim)

Will the shortage affect the Libre Renegade Elite or the two memory versions of the Nanopi m4?

Have a good day.

So not long to go

In the case of Libre Computer at least, their board relies on LPDDR4 RAM, so they don’t have the issue about DDR3 supply.

‘ DRAM makers could be fined $8bn

Samsung, Hynix and Micron could be fined up to $8 billion by the Anti-Monopoly Bureau of China’s Ministry of Commerce, reports Digitimes. “

It could also be Amlogic S905X2 or S905D2. Some work for these is already done on linux side (and it seems they licensed GPU libs for linux this time) and they’re preparing Oreo 8.1 for these SoC-s. And that mysterious “Dvalin” GPU is actually Mali G31-MP2 based on http://openlinux.amlogic.com/Android/Mbox. For S922 I didn’t find any official specs.

A bit unlikely given that Hardkernel evaluated for their N1 (an XU4 replacement) not only RK3399 but also S912 and RTD1296. The S912 got dropped due to lack of devent IO capabilities which is a limitation the chip shares with S905X2 and S905D2 (and the S905X2 does not even support Gigabit Ethernet?). Also those SoCs use only 4 slow ARM cores (A53) so no way to advertise something based on this as an XU4 successor.

Hmm. Perhaps it’s a SoC we haven’t heard of yet, or not in the context of SBC, anyway? Historically, Hardkernel have worked with Amlogic and Samsung. N1 was going to be their first Rockchip board, chances are thanks to the excellent mainland support in combination with good specs. Remember, whatever the new SoC is, it should be at least as good as 3399 CPU *and* GPU -wise, for Harkernel to claim a specs upgrade. Could it be an M3 SoC?..

> Perhaps it’s a SoC we haven’t heard of yet, or not in the context of SBC, anyway? Who cares? Who needs this NDA crap? And if it’s a brand new SoC from one of those vendors not caring about mainlining their hardware software support situation will be crappy anyway. Let’s forget about N2 for now and check situation in 3 months again. Still hoping for an “N1 lite” with just 2 GB DRAM since at least here in Germany an awful lot of people is obsessed by having ‘native SATA’ on SBC (which is PCIe attached SATA on the… Read more »

Renegade Elite mezzanine has a M.2 NGFF M Key with PCI-E x4. You can attach a daughter board to it with native SATA.

Are there no other makes of memory they could use?

I guess they have RockPro64 as competition and they’re taking orders at $79 for the 4GB version, so seems like a good idea to switch SoCs at this point in time.

That one only seems to have two LPDDR4 chips, so there’s a question if it has enough bandwidth or it will take a significant hit from having half the bus width available.

> That only seems to have two LPDDR4 chips With LPDDR you don’t need 4 chips. I would search for ‘tinymembench’ and then the board in question. Numbers for ODROID N1 (DDR3) and NanoPC T4 (LPDDR3) you’ll find in Armbian forum. It should be noted that both bandwidth and latency differ massively when running with Rockchip’s 4.4 BSP kernel and mainline (faster for whatever reasons). With RockPro64 (LPDDR4) I didn’t test with tinymembench yet since Rockchip internally currently evaluates PC-2133 timings and will provide those in a few weeks (IIRC we run with PC-1600 timings currently). Then RockPro64 and Renegade… Read more »

I had no idea. Datasheets are usually very vague and don’t mention channel width.

But has this been verified or is the Renegade running 1x32bit on that chip? If so, could it still support even wider 2x64bit configuration?

All these rk3399 boards seem expensive. Generic TV boxes with the rk3399 seem to be more than twice the cost of S912 boxes. Is the SoC really that much more expensive?

I’ve kind of given up on these and have been using little Atom-based PCs. They are not much more expensive and the Linux support is much better.