We’ve previously written about Ping, a tiny Cellular GPS tracker that promised to last 3 months on  a charge. The raising money part of the crowdfunding campaign itself was successfully with over one million dollars raised, but as with many such campaigns there have been delays, and some people still have to receive theirs, not to mention people complaining about poor battery life and other issues.

But there seems to be another option now with Tail It Technologies now offering four different “Tail it” cellular GPS trackers (with WiFi too) for things, pets, and even one designed specifically for bicycles. The company has already sold their devices to thousands of customers in Norway, so they should be working, and on-time delivery should hopefully not be an issue.

All four GPS trackers come with 2G, 3G, 4G, and WiFi connectivity,  a 5-meter accuracy, and share the same electronics and firmware. Here’s a list of the four models and their main features:

The company claims there’s no subscription, nor monthly fees associated with the tracker, but does not clearly explain how the cellular connectivity is to be achieved in the description. This is however explained in comments:

In this case the units can use SIM-cards from most operators in the world. If you get a pre-paid card or any other type of extra card you will avoid monthly subscription. When we send out the units they will contain a optional SIM-card which you can activate, this will cost 4.99USD a month, when the tracker is in use, nothing if you dont use it.

So you’ll have the choice of using your own SIM card, or optionally activate a $5 per month SIM card included in the unit. 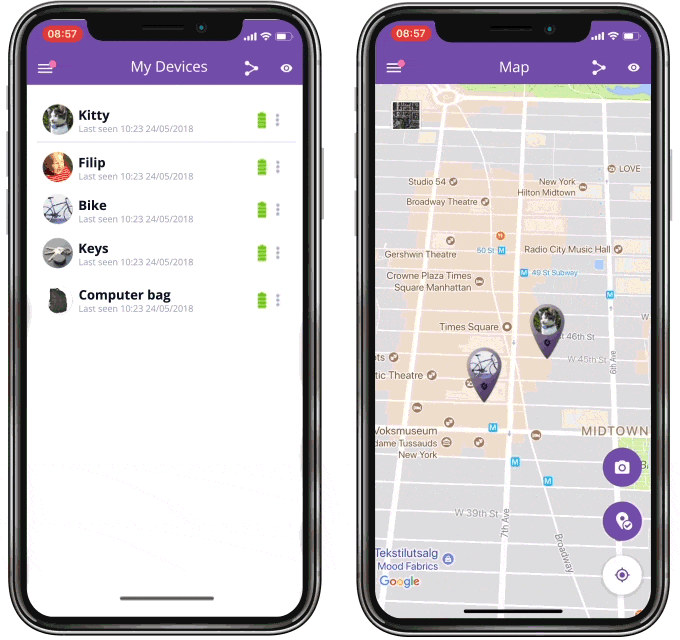 The trackers are managed through Tail It mobile that is already available for iOS and Android. I’ve linked to Android APK, since the app appears to have been taken down on Google Play at the time of writing.

There’s a three step setup for each tracker: 1. scan the device number, 2. add a photo,  3. monitor the device location on the map.  Right now, the position is updated roughly every minute if the device moves, but the company will be working on a fast live tracking option. The latter should affect battery life however.

Tail it GPS tracker has launched on Kickstarter aiming to raise at least 100,000 NOK ($12,350 US), and they’ve done good so far with over $50,000 raised. I’ll use US dollars equivalent prices going forward. They’ve kept things simple as perks start at $86 for Tail it, Tail it+, Tail it Pet, or Tail it Bike. You can pay less per unit by selecting bundles of up to 10 GPS trackers. Shipping adds $18 to $37 depending on select reward. Delivery is planned for September 2018.

Seems like it offers the possibility of keeping track on your spouse, your children, your neighbors if the device can be surreptitiously applied to their vehicle or inserted into their personal belongings, and a boon for cambrioleurs who need to know when the occupants have driven off to some distant location by placing such a device on the home owner’s vehicle. No doubt Jihadists could also put these devices to use to be more effective on their missions.

You are pitifull, Richard. Here we are talking about objects and technology, not about what your damaged brain could make use of them. Have fun with your demons. Nothing to add.

“You are pitifull, Richard.” When a rebuttal starts with an ad hominem attack, which some have described as “the last refuge of someone with nothing to say”, it yet agains highlights the times we live in where hard truths are to be swept under the carpet by feel good emotions. “Here we are talking about objects and technology” So you have no concerns about how these technological doodads will have a malevolent effect on society and your privacy. Just keep sticking your fingers in your ears and your head in the sand and pretend the bad things will just go… Read more »

What else do you expect when you live in a authoritarian surveillance state where you can be arrested and detained for up to 24 hours even if you have committed no crime but a police officer “reasonably” believes that you have committed an offence, are in the process of committing an offence or are about to commit an offence (Serious Organised Crime Act 2005)? —————————————— The Guardian . November 16, 2016 ‘Extreme surveillance’ becomes UK law with barely a whimper Investigatory Powers Act legalises range of tools for snooping and hacking by the security services A bill giving the UK… Read more »

I think it would work better hidden in the saddle stem so that a length of the tube could stick up out of the tube; however, it would make it quite difficult to remove regularly for recharging.