Before Allwinner launched their popular A10 Cortex A8 processor earlier this decade, the company had Allwinner F-series ARM9 processors found in E-ink readers, vehicle multimedia systems, audio products and so on.

I would not expect a new board based on of those processors in 2018, but LicheePi Nano looks to be exactly that with an Allwinner F1C100s processor, a form factor roughly the size of an SD card, and support for RGB LED displays. 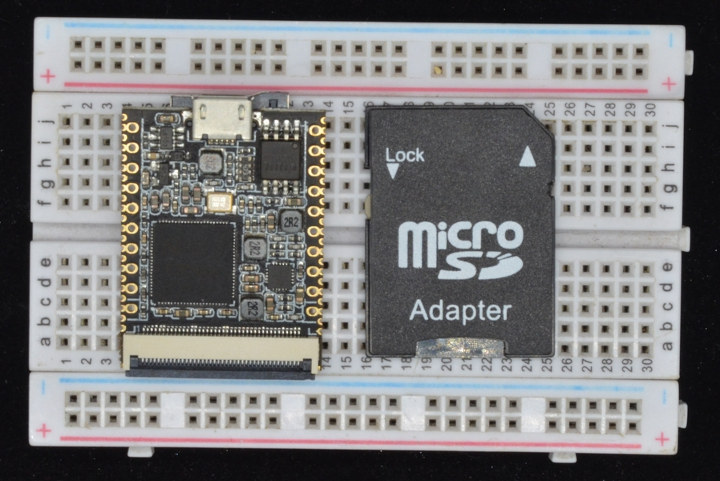 The board works with 3 different operating systems: Linux, RT-Thread (RTT), and Xboot. With the amount of RAM in the board don’t expect to run a desktop environment though. There’s what appears to be good documentation in a dedicated website, with the main downside that it is currently only in Chinese language. The company however offers support via Telegram, and they can speak very good English there.

I first found the board in Banggood where it is sold for $8.46 shipped without SPI flash, and $9.59 with 8MP SPI flash. A 5″ capacitive display with 800×480 resolution is also available for $27.43 including shipping.But the board is also listed in  Taobao for 9.99 RMB and up. So that’s under $2. The only problem is that it looks to be out of stock. We can also see other versions of the board with WiFi, and kits with a 5″ display. Banggood includes a USB to OTG adapter and worldwide shipping, but still I’d expect the “oversea” price to eventually drop closer to $5 or $6 with shipping.

Yes, a new ARM9 chip, this is terrible.

I see. Maybe that’s why I could not find it on Allwinner website, so I had find info on linux-sunxi website instead 🙂

you know, just a note that the guy behind this treated his backers like shit, sent random second hand garbage instead of what was actually pledged. never ever answered any inquires, including as to why he decided to scam his backers… so yeah…
so why so much publicity for a proven scammer?

I bought several times from Zepan’s Taobao store, no problems at all. My order was shipped in 1-2 days. He always replies when I have questions. From my point of view he is not scammer at all.

I backed the Lichee Pi and have receive them and successfully running linux on them. Not scam.
But it lacks tutorial/documentation. I don’t even know how to blink the LED.

I received my lichee pi zero without issue. It worked as advertised. I have enough experience with Allwinner to know that it wouldn’t come with a tutorial. but I think there is one now on the lichee pi wiki. These lichee boards are not for beginners, get a rasp pi zero for your first board.

The specs don’t look that impressive considering the price of $5 for Raspberry zero which comes with full community support and millions of users.

Rasp Pi Zero is sold at BOM cost. Don’t use it as a yardstick for what things really cost. That’s why you are always restricted to buying one or two units. Try to buy 10,000 PI Zero at $5. You can’t, they will quote you around $12.

“With the amount of RAM in the board don’t expect to run a desktop environment though.”

I was running the Gimp on my first PC with Linux, which had 32MB of RAM.

Yeah, my 386DX40 had 4MB and ran my desktop just fine. 🙂 We’re letting our desktop environments suck up way too many resources these days.

One could say the resources are put in good use. Large memories enable the use of JavaScript powered technology. This allows normal users to contribute. Soon even resource scarce embedded boards will run JavaScript.

Sure, and to run malware in virtually every browser, spin my laptop’s fan while trying to quietly read cnx-soft and other sites, and generally make the web much slower than what it used to be 20 years ago for a much poorer average quality. Netscape 2 used to load any page instantly over a 9600 bps modem 20 years ago. This on my 32MB Cyrix 133 MHz. That’s when the web was interesting. The only thing we’ve really won in exchange for all these wasted resources is realtime audio and video playback, which do not require javascript.

“This allows normal users to contribute”

(and even then, most programmers just aren’t very good at their chosen trade regardless)

Good board, we are running our animated GUI and JavaScript smoothly in this board with RT-Thread OS.

I got some of those boards. The Linux and u-boot support isn’t so good. It seems the developer will not support some Linux with packaging system like Debian etc.
If you get version with SPI FLASH to re-program the flash, currently must ground the flash clock pin etc.
One forum with many topic about LicheePi Nano (only in Chinese language): https://debugdump.com/f_17.html

Steve:
This is how I see lichee * boards – 1/ lichee pi nano – does not make any sense, given the you can get raspberry pi zero for less and with millions of existing user base; 2/ lichee tang – is not meant for the World as is can be purchased only in China, 3/ lichee ai – appears to be promising, but my guess is it will become obsolete by the time it will be available to the World. Concluding…. This is a dead-end

@kissste, RPi Zero is expensive, in EU is about 10 EUR with shipping and the price is limited to 1 pcs. To mention not that Broadcom is not willing to provide chips to small developers. So their solutions do not present any interest. Orange Pi Zero seems a better alternative, but the latest versions gets hot, apparently they increased the CPU core voltage …

LicheePi Nano has LCD interface as well as according to the datasheet the touchscreen ADC can be used as single-ended 12-bit ADC. It is a very good solution for portable equipment. Also with cheap WiFi module can be a alternative solution to ESP32, but the software support is still under development and some disappoint for those lazy Python programmers – Python doesn’t run well on this chip. I tried PyPy, Nuitka … no optimization at all. Hope the Linux support will be fixed soon.

Lichee Tang is an interesting solution. I am even surprised that the Chinese were able to offer such chip at such price. In the FPGA market the prices are quite strictly regulated by those few players on the market. Still without fast hard-coded CPU is kind of restricted solution.

Lichee Dan – to me this does not present any interest. I read other companies like Ingenic released recently similar solutions – T01.

LicheePi Zero – I order today one board. Initially it was advertised for 6 USD. I paid today 14 USD with the shipping in China for a docked version (it has Ethernet, USB, audio connectors …). Kind of not happy and the seller did not offer any discount, for this price I could purchase H3 board, but no other alternatives with V3S at this price.

You can use ship forwarding services from China, I use: https://www.shipforwarder.com/. They had some issues with credit card payments, hope they fixed it. But still there are lots of other expenses, like payment fees, shipping fees within China, forwarding fees etc. At the end of the day it gets kind of expensive and considering the software issues, I also have doubts if I should deal with the Allwinner at all, but kind of no other solutions for small quantities product manufacturing.

Tell me if you can program “Hello World!” on this chip. hahaha. Advertise something useful to the customers.

This is not advertisement, some opinions. If you do not have basic Linux programming skills there courses on internet etc. To the best of my understanding the F1C100S Linux support is still under development etc. But the Chinese raised the price of LicheePi Nano etc.

Update: Had recently some issues with https://www.shipforwarder.com/, do not recommend to use it.

I bought many of this chip for making drone. I was not even able to connect network no matter what I do. Their website has extremely poor documentation. Camera module was not even ready. Most of documents were distributed thru BAIDU which requires ability to read Chinese and you will have to install BAIDU downloader to download anything they distributed.
Buying this chip would be totally waste of time and money. Yah, it is dirt cheap, but is your time also that cheap?
I am even MAD to the maker of this chip.
Someone down there says these guys are scammer. I totally agree.
These guys may be doing their best, but it is scammer level to the customers.

So far, I haven’t seen anyone who could put this board to the network, able to install smb, python, gcc, or anything. This board is nothing more than a junk. This board could have been good if the one who made has even a slightest sense of customer service. Board itself is OK for price. Their software is deep shitty quality that you cannot do anything with it. Their customer service mind is at the level of some unknown country from Africa; it is way below the standard even for Chinese.