The company has now launched two new boards based on S5Pxx18 processors, namely NanoPi Fire2A powered by S5P4418 SoC, and NanoPi Fire3 based on S5P6818 octa-core Cortex-A53 SoC. Both boards share the same form factor, which remains quite similar to the one of NanoPi 2 Fire, except the HDMI connector now makes place for a micro HDMI port, the USB 2.0 has moved into vertical position, and a few other tweaks have been made to positions of buttons and components. 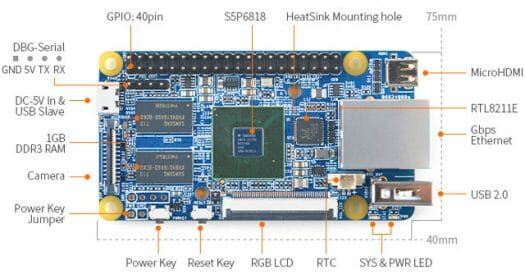 Other differences with the earlier model: AXP288 PMIC is gone, and replaced by an STM32 Cortex M0 MCU, and the company has now added mounting holes for a heatsink. The company provides FriendlyCore, and Debian firmware images for both hardware, and an extra Android image for Fire3 board. FriendlyCore is based on Ubuntu Core 16.04 with Linux 4.4, Qt 5.9 with OpenGL, and GStreams with VPU acceleration. The good news is the Linux kernel got an upgrade from Linux 3.4 to a more recent Linux 4.4 LTS kernel. 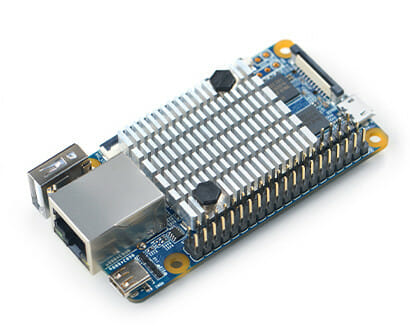 I noticed the new board yesterday on their site, it’s really nice. I’ve been waiting for this one last year as an attempt for by build farm and for various other stuff. Also their upgrade to kernel 4.4 is much welcome, the 3.4.39 they were providing is totally outdated and contains thousands of bugs causing a lot of stability issues. With 4.4 we’ll at least be able to occasionally rebase on more recent LTS releases to benefit from fixes even if the SoC vendor doesn’t do its job. I also noticed that this time they drilled holes to attach the… Read more »

Wonder if NanoPi would ever take inspiration from Odroid MC1 and build a NanoPi Neo type device with Samsung Exynos 5422 and pop 2GB ram ?

“NanoPi Fire2A/3 Connected to LCD430 Display (Left)”
– what is he running, FriendlyCore, Android ?

And, for that price the heatsink should be included…

The SoCs look the same as the ones in Samsung Artik 5xx and 7xx.
You can check the Artik github for 4.4 kernel sources.

@memeka
These are the same SoCs but IMO a better starting point is github.com/rafaello7/ (mainline u-boot/kernel for the older NanoPi M3 and NanoPC T3 also basing on the same SoC)

@tkaiser
no I hadn’t, thanks for the link. Will try.

An even better option would be to have a kernel derived from mainline. Rafaello’s kernel started with a huge import, hence it’s not possible/easy to pull updates from LTS. Also sadly it’s based on 4.11.x which is now dead. Hopefully he will rebase it on top of 4.14 once it’s out.

@JotaMG
Good suggestion! That would be added.

So I’ve just tried that, and it was trivial to rebase on 4.4.97. I just found something like 10 trivial conflicts, it took no more than 10 minutes to do it one branch at a time to keep a fine history. It’s cool because it will finally be possible to maintain up-to-date kernels with all known fixes. BTW, the patch against 4.4.x-mainline is about 88 MB uncompressed and 5.6 MB gzipped, and it covers both the 4418 and the 6818. So it’s not huge.

@willy Great news! Since I was a bit curious I took one of my NanoPi M3 today and tested quickly through some stuff with 4.11.12 (my understanding is that Raffaelo also started with Samsung’s ARTIK 4.4 kernel, fixed few things and ported everything to then up-to-date mainline kernel which was 4.11 half a year ago). To me it seems that SBC with S5P6818 currently are both the fastest and cheapest octa-core thingies around as long as they’re able to keep running at 1.4 GHz on all cores simultaneously and it’s not about AES encryption (since missing the ARMv8 crypto extensions).… Read more »

Cute little board. They don’t seem to respect their own designs a lot though, they seem to already have discontinued the Nanopi M3? Not to mention the original M1 and about a dozen other boards. I wonder what that’s about.

Anyway the old PMIC could handle lithium cell charging, this cortex MCU doesn’t handle any of that. I guess it would be of limited use in a power-hungry board such as this, but I would have liked the option of turning this into a portable thingy without additional charging circuitry.

Pity it has only got 1GB of ram

It’s good to see a replacement for the m3, and these boards have great density for clusters. But, to get the performance out of them you need a work load that scales to 8 threads and still fits in 1G of RAM. I find that to be quite limiting, so I really wish they had provided a 2G model with this revision.

On the plus side, I find the S5P6818 (in my m3) to be relatively easy to cool with heatsink and fan, even when over-clocked to 1.6GHz, and it still holds the performance title in my collection of SBCs.

@James
If people really want more Ram write to NanoPi sales Director, email for sales on Friendlyelec, and politely make your case for why.
The more that register a genuine need and interest the better.

These NXP / Samsung Soc are mostly popular in industrial embedded, that market drives NanoPi design on these.

James :
I really wish they had provided a 2G model with this revision.

Well, by looking at the bottom PCB side of ‘NanoPC-T3(2GB)’ it seems 2GB would require 4 DDR3 chips…

@James
Not that long: wiki.friendlyarm.com/wiki/index.php?title=NanoPC-T3(2GB)&action=history (BTW: since they provide a ‘wiki/index.php/Special:RecentChanges’ URL receiving updates in your inbox is fairly easy if you take the additional steps web2feed –> filter –> feed2email)

Rafaello7 suggests using 64-bit compiler to cross compile the kernel and also making “64-bit Debian/Ubuntu installer for NanoPi M3”. But due to low amount of RAM as well as the lack of RAM BW to the SoC (32bit * 800MHz) , I think it would be better to compile the kernel using 32-bit ARMv7 crosscompiler and make 32-bit FS. Consider the Cortex A53 can also run in 32-bit ARMv7 mode (as official *absurd* M3 OS images use 32-bit ARMv7 kernel and binaries). Any body has an experience? Dose it need any kernel configuration to be change?

@MHSadri
You’re thinking about the kernel while you should think about the userland instead. Building a 64-bit kernel is fine (and of course cross-compiling unless you’ve already set up a fast build cluster like @willy did) but on such boards with rather low RAM combining this with a 32-bit userland can make some sense (binaries are somewhat smaller and memory demands are lower).

Some details why this could also make a lot of sense on servers: https://github.com/armbian/build/issues/645 (but I’ve given up almost entirely on trying to optimize Linux builds on ARM for now)

tkaiser : To me it seems that SBC with S5P6818 currently are both the fastest and cheapest octa-core thingies around as long as they’re able to keep running at 1.4 GHz on all cores simultaneously and it’s not about AES encryption (since missing the ARMv8 crypto extensions). I agree that it’s one of the fastest boards (others using S912 or RK3368 at 1.5 GHz may be faster, provided they really run at this frequency). However regarding crypto I disagree with you, extensions *are* there : [email protected]:~# cat /proc/cpuinfo processor : 0 BogoMIPS : 19.84 Features : fp asimd aes pmull… Read more »

etatto : Hope your patch will be available to download, so maybe a Armbian dev take the tasks to include these sbcs, even I know the FA images are not so bad after all… I’m certainly not going to post an experimental patch I’ve done in 5 minutes in /dev/shm just for a test, based on sources downloaded from an unofficial site, some people would dare redistributing it, considering it good enough. I’d rather help the friendlyarm guys ensure their official kernel is in a good enough shape for anyone to easily follow LTS updates. This will be much more… Read more »

willy :
However regarding crypto I disagree with you, extensions *are* there :

That’s good to know, I wait for an 4.4 LTS appearing in FriendlyELEC’s github repo and will re-test on my own. Thanks for the heads-up!

willy : etatto : Hope your patch will be available to download, so maybe a Armbian dev take the tasks to include these sbcs, even I know the FA images are not so bad after all… I’m certainly not going to post an experimental patch I’ve done in 5 minutes in /dev/shm just for a test, based on sources downloaded from an unofficial site, some people would dare redistributing it, considering it good enough. I’d rather help the friendlyarm guys ensure their official kernel is in a good enough shape for anyone to easily follow LTS updates. This will be… Read more »

There is a NanoPC-T3 (2GB) on Frienyarm.com now

For those interested, I’ve just seen the new “nanopi2-4.4.y” branch on FriendlyARM’s github in the “linux” repository. And yes, it was done the correct way, by forking it off a mainline LTS kernel! That’s really great. No more hacks trying to rebase it, just merge newer kernels on top of it and that’s done. That’s pretty cool. I’ll probably reinstall my T3 now 🙂

Is there something else I need to do to access this kernel?

@davef
I don’t know, I haven’t tried yet, just seen it on their github. That said, if it appears, I don’t see why you couldn’t retrieve it. Are you sure everything works as expected on your side ?

@willy, in which way is this better than an S912 (H96Pro+), except for the 2GB vs 3GB RAM difference?
I’m considering this one, but is about 2x price incl. shipping to Europe compared the H96Pro+ i got now.

Now have a T3PLUS Acrylic Case on sale @ friendlyelec

@fossxplorer
Sorry I didn’t notice your message. I don’t have an S912 but what I like with the npi-fire is the form factor. They’re amazingly small, you can stack all of them together, placing them vertically and the resulting block allows you to have about 20 boards in a 1U box. The power connector is accessible behind, which is perfect, so that all the ports are on the front, ready to be connected to a switch. I do have a npi-fire (the previous one) and I really love it for its convenient form factor, performance and pretty decent specs.

For those interested, I finally bought one. It’s really cute, lying on my desk and swallowing my test code 🙂

@willy
Can you please link to that github. i’m only seeing linux 4.1.x, And i need to compile the 4.4 with cmc_acm module.

Friendlyelec have just launched their S5P6818 All in one Android system inc 9″ LCD
https://www.friendlyarm.com/index.php?route=product/product&product_id=255