Touchpads is a feature found in most laptops,  but AFAIK there’s not been much innovation recently apart from maybe support for multitouch and gestures. But I’ve just found out ASUS started to showcase laptops without touchpad a few months ago, instead integrating what the company calls a ScreenPad, a 5.5″ touchscreen display placed at the location where you’d normally expect a touchpad. 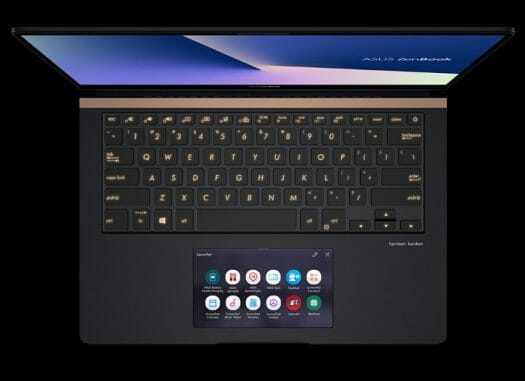 The company’s latest (and second) laptop with a ScreenPad is Asus ZenBook Pro 14 UX480FD, which comes with a 14″ display, processor up to an Intel Core i7-8565U Whiskey Lake-U processor, up to 16GB DDR4 RAM, and up to 1TB PCIe SSD storage, as well as an NVIDIA GeForce GTX 1050 Max-Q graphics,  802.11ac WiFi, Bluetooth 5.0, and more. You can visit the product page for the full specs, as I’ll focus a bit more on the ScreenPad in this post.

The ScreenPad in this laptop is a 5.5” FHD (1920 x 1080) Super IPS+ display, with 178˚ wide-view technology,  glass-covered for fingerprint and smudge resistance, and featuring precision touchpad (PTP) technology supporting up to four-finger smart gestures. 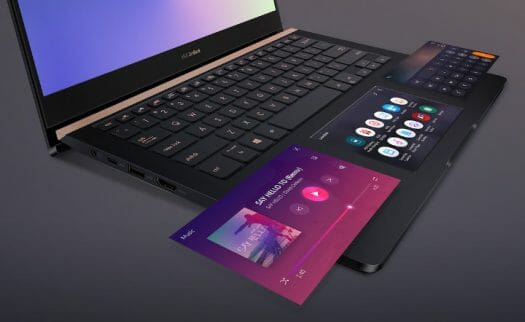 Pressing the F6 key on the keyboard will switch to three modes for the ScreenPad:

ASUS has posted a short tutorial video that describes clearly what can be done with the ScreenPad.

That looks interesting, but that’s probably one of those things you have to experience yourself to find out if it’s just a gimmick, or really help with your workflow. Pressing F6 does not look overly convenient though, especially if you switch between touchpad and ScreenPad mode frequently. A button on the side of the small display may have been more user-friendly. If you ever wanted to install Ubuntu or another Linux distribution on such laptop, support for ScreenPad would likely be another hurdle. Do you think those will become more prevalent, or the traditional and cheaper touchpads still have a long life ahead?

Speaking about pricing, we still don’t know how much the Zenbook Pro 14 UX480FD model will go for, but the earlier – and more powerful – Zenbook Pro 15 is said to cost $1,799 and up depending on configuration. Neither models appear to be for sale online right now.

Wow. Great not only Apple is known for such “innovations”. Patent pending on this innovation i guess?

See now, if this wasn’t Asus but Wacom, I’d venture to guess this thing would be pretty great for artists.

Nextstep : do this with the smartphone… https://www.mirror.co.uk/tech/remarkable-apple-patent-shows-your-10089403
(or even better : use the whole smartphone as the main computer and consider the “laptop” merely as a dock with battery+screen+keyboard+connectors. With a Snapdragon845 + 8G RAM + fast eMMC in smartphones this is now realistic. I only wish smartphones would expose more I/O from the SoC to enable direct HDMI and GPIOs and others )

Only 4 GB ram though.

I think Razer was showing off a working-concept/prototype of this for their razor phone at CES 2018, under the name ‘Project Linda’. Not sure how they planned to deal with the Apple patent, though.

Why bother having a keyboard at all?
Just put in another 14″ touch display, with a nice image of the keys.
and a much bigger battery, of course…

As a ex zx81 user, trust me a keyboard is best!

Lenovo had a laptop that replaced the keyboard with a big Wacom-style touchpad and the new model will come with an eink display where the keyboard was. Might be interesting for taking notes but kinda pricey.
https://www.theverge.com/2018/8/30/17788476/lenovo-yoga-book-c930-dual-e-ink-screen-price-photos-release-date-ifa-2018

I guess it’s ok if you look at the keyboard while you type. I have to disable any touchpad to make a laptop usable myself.

You realize you can configure both your OS and the touchpad driver to disable it while the keyboard is in use, right?

And I’d say this should be ok for pretty much any human bean: looking at another screen at the base of the laptop shouldn’t differ too much from having a second monitor or using your phone while on the computer, if it will end up justifying the cost, that remains to be seen.