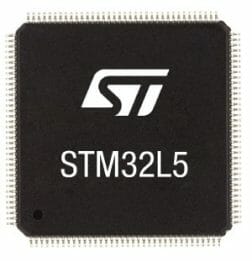 STMicro STM32 microcontrollers have so far been based on Arm Cortex-M0/M0+, M3, M4, or M7 cores, although we’ve also seen a yet-to-be formally announced Cortex A7 variant shows up in Linux 4.17 with STM32MP157C.

Two sub-families are part of the STM32L5 series:

Besides the extra HW crypto block both share the same key specifications:

STM32L5 MCUs are expected to be found in industrial sensors or controls, home-automation devices, smart meters, fitness trackers, smartwatches, medical pumps or meters, and other applications.

STM32L5 series MCUs are sampling now, mass production should start in Q2 2019. The company is also showcasing its new microcontrollers at Arm TechCon 2018 until October 18. More details – but no documentation yet – can be found on the product page.

Thanks to Lucas for the tip.