So this last week was pretty calm, even if the pattern of most of the stuff coming in on a Friday made it feel less so as the weekend approached.

And while I would have liked even less changes, I really didn’t get the feeling that another week would help the release in any way, so here we are, with 4.17 released.

No, I didn’t call it 5.0, even though all the git object count numerology was in place for that. It will happen in the not _too_distant future, and I’m told all the release scripts on kernel.org are ready for it, but I didn’t feel there was any real reason for it. I suspect that around 4.20 – which is I run out of fingers and toes to keep track of minor releases, and thus start getting mightily confused – I’ll switch over. That was what happened for 4.0, after all.

The big 4.17 stuff was mentioned in the rc1 email when the merge window closed, but I guess it’s worth repeating how 4.17 is actually a
slightly smaller kernel than 4.16, thanks to the removal of a number
of effectively dead architectures (blackfin, cris, frv, m32r, metag, mn10300, score, and tile). Obviously all the other changes are much more important, but it’s always nice to see spring cleaning like that.

And with this, the merge window for 4.18 is obviously open. I actually have some travel the second week of the merge window, which is very inconvenient for me, but I do hope that we’ll get all the big stuff
merged the first week and it won’t impact any release scheduling. But
we’ll have to see. 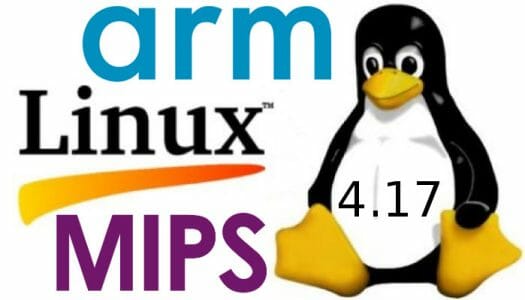 Some notable changes for Linux 4.17 include:

Some of the changes related to the Arm architecture in Linux 4.17:

The main MIPS changes for 4.17 have been to add support  for Microsemi Ocelot SoCs, adding CRC32 and CRC32C HW acceleration module, and various cleanups and misc improvements. But as usual the MIPS maintainer (James Hogan) provides a fairly details summary of the changes in his commit message:

Thanks for the summary, Jean-Luc!

My google FU is keeping me dry. Can anybody find more information on STM32MP157C The only thing I can find is that’s something based on Cortex A