HiSilicon Kirin 980 was the first processor announced with Cortex A76 cores, which were said to deliver laptop-class performance, with 35% performance improvement over Cortex A75, and around twice the performance of Cortex A73 cores thanks to improvements, and a higher CPU frequency up to 3.0 GHz.

But now that Huawei Mate 20 / Mate 20 Pro smartphones are out, various reviews have been published, and Anandtech was mostly able to confirm the claims. In most case, actual results were inline with expectation despite Kirin 980 clock speed being “limited” to 2.6 GHz. 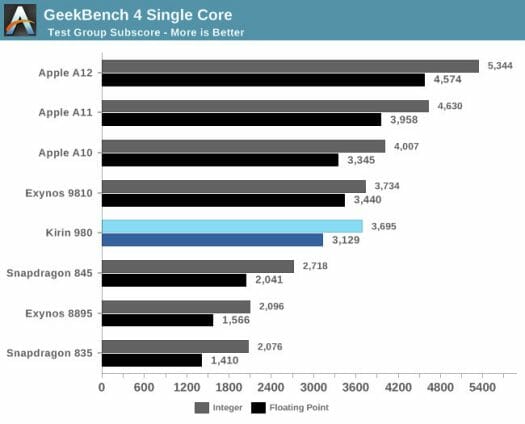 Looking at GeekBench 4 single-thread integer and floating-point scores, the Cortex A76 core based Kirin 980 is significantly faster than Cortex A73 powered Snapdragon 835 clocked @ 2.45 GHz. Precisely: 1.77x faster in the integer score,and 2.21x faster in the floating point score. 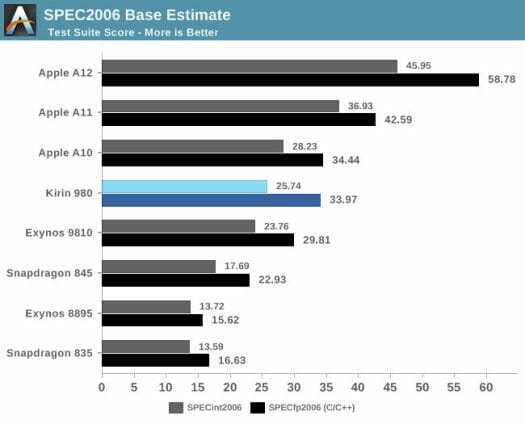 SPECS2006 confirmed the good performance with 1.89x higher integer score, and 2.04x faster for the floating-point benchmark. If we adjust the scores to compare the processors at the same frequency, Cortex A76 is 1.58x and 1.79x faster for respectively integer and floating-point scores. 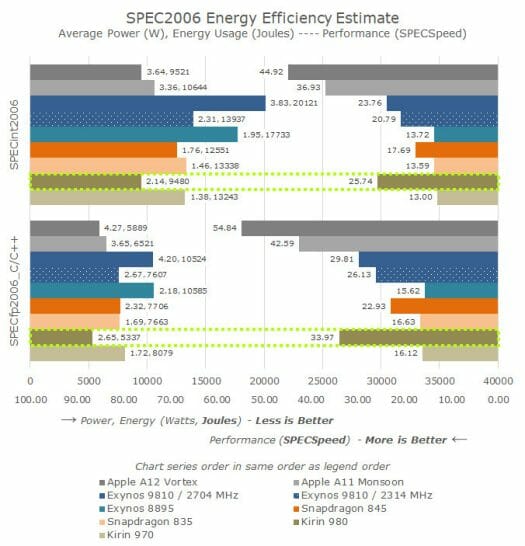 But there’s more than just performance in battery powered device, and power consumption is important too, and here again Arm Cortex A76 shines with improved performance while using significantly less energy.

CA76 is nothing short of a dream core. Here’s to hoping for an affordable SBC and a chromebook with this core by mid next year!

I own HiKey 960(kirin 960) and 970(kirin 970) and if they change that stupid design with memory on top of SOC they would be able to cool it better and get higher frequency or go on higher frequency longer. I am sure that kirin 980 generate less heat on that 7nm so it can run on 2.6 GHz for longer time as kirin 960 run on 2,4GHz (on big cores) for really sort time and kirin 970 run on 2,4GHz(on big cores) better but still overheat after one minute 🙂 only kirin 970 on 2,4GHz run without problem with BIG… Read more »

CA72 @ 28nm is really hot at 2GHz — that’s been the case on the macchiatobin for me, where it takes a side-mounted fan, in addition to the factory spreader, to enable stable 2GHz. Curiously enough, some enclosures are perfectly capable of maintaining stable 2GHz+ clocks with passive cooling — I know of at least two MT8173 chromebooks, where the CA72 keeps 2.1GHz without exceeding high 40s C, so apparently not all passive cooling is equal /captain obvious

imho, this is a little off topic since both kirin 960 & 970 have cortex a73 cores that run at the same max frequency.
A72 & A73 are very different architectures (former targets pure performance, latter targets performance efficiency)

as far as i understand, one of the main difference between kirin 960 & 970 is the usage of a better process node, and it seems all its headroom have been used to improve efficiency
https://www.anandtech.com/show/12195/hisilicon-kirin-970-power-performance-overview/3

maybe they cheat and they don’t provide actual cpu freq 🙂

On kirin I did x264 encoding so NEON and every FP units generate heat as much as possible.
and small cores was offline
but I am not sure with GPU and NPU(neural) and GSM modem so lets hope they was off

No cheating in chromeos land ; ) Plus, it’s been checked and double checked under chromeos and linux (temps were measured only under linux, and with GPU maxed out via OCL) — the TDP design of those chromebooks is just *that* good.

@nobe, right, I keep forgetting kirin960 already had CA73, and the latter is definitely power-optimised.

My mcbin was sold as the “google cloud” kit, so it comes with a very nice aluminum enclosure, which is a real pain to open and close since you have to slide one side into the other one. But the point is that the CPU is pressed against a wide alu block part of the enclosure itself, and the board remains barely warm at 2 GHz at full speed. It rarely reaches 50°C. Those we have in the lab at work do in the middle of the stack (we stacked 7 of them on top of each other). If you… Read more »

Hmm. I have an early 1.2 board revision — I doubt it will fit perfectly. If nothing else, it corresponds to the current ‘double shot’, so the enclosure should have openings for the 10Gb copper connectors as well.

That’s a fair point. I’m still impressed with the thermals of both MT8173 and RK3399 chromebooks, though.

So what are Apple doing for the pop A12 to perform so much better?

Most simply put, a state-of-the-art memory subsystem, plus a very wide pipeline.

Wow, totally off-topic here but I just realized by comparing Geekbench scores for an ‘iPad8,8’ (Apple A12X) with the Core I7 in my laptop that the single-threaded performance disadvantage of ARM cores is none any more.

Can’t really complain. My laptop with 85W rated USB-C charger idles at 5.1W in a rather useless ‘no display active, nothing connected’ mode. That’s a whopping 0.6W more than the latest ARM board I’m testing (Khadas Edge/Captain with their USB-C charger included).

But yeah, with an Apple ARM laptop both idle and also full load consumption will be way lower with premium ARM cores and premium components (for the usual premium price 😉 )

Sadly, I reckon by the time Apple launch a macbook or mac mini with their own Arm processor in it, the hardware will be so locked down that it will only run OSX, and no third party apps and maybe no virtualisation, so no chance of using it for linux etc.

Wonder what other Arm SoC can implement for faster speed without the Apple price? ( just read Apples latest phone xr xs sales not hitting targets ) So their making more iPhone x to use agreed oled display quota up.