Arm announced Cortex A76 CPU core and Mali-G76 GPU in June of this year, and in the past, we normally had to wait about a year between the announcement and the actual launch of SoC with the new IP core.

But courtesy of HiSilicon (Huawei), we already know of one Cortex A76 processor with Kirin 980 processor featuring three clusters with two high performance Cortex A76 cores, two Cortex A76 cores clocked at a low frequency, and four Cortex A55 efficiency core. The company also added the new Mali-G76 GPU for good measure. 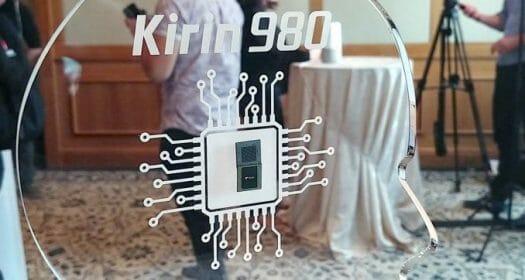 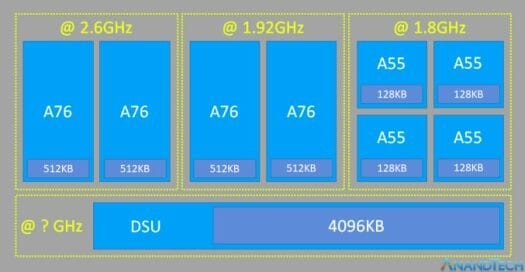 As a reminder Cortex A76 is supposed to provide laptop-class performance with 35 percent more performance compared to Cortex A73/A75, and Kirin 980 should deliver 75% higher CPU performance, and 58% better efficiency compared to Kirin 970. 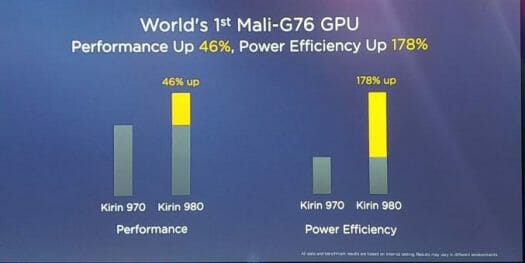 GPU performance, and even more  power efficiency is also much better with the Mali-G76MP10 GPU in Kirin 980 compared to the Mali-G72MP12 in Kirin 970.

HiSilicon also provided some charts showing much higher single core performance and power efficiency over a Snapdragon 845 processor in GeekBench 4. 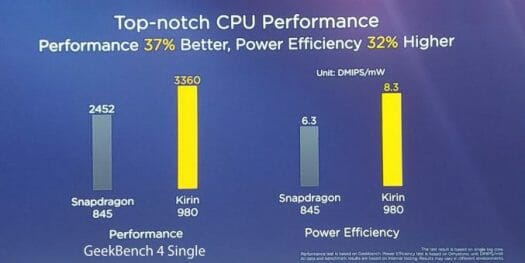 When it comes to AI workloads the difference is even more striking with claims of 134% better performance, 94% better efficiency with Resnet 34 & Inception V3.

Huawei Mate 20 and Mate 20 Pro smartphones should be the first devices to launch with Kirin 980 processor, and we won’t have to wait too long to find out about the official launch is planned for October 16th.  We should already expect a Hikey 980 development board a bit later, maybe in Q1/Q2 2019.

So it looks like it don’t produce too much heat on 1,92GHz and core can run and cool with stuff in phone.
But for marketing purpose we will need that 2,6GHz 🙂 as we want to be faster or in pair then everybody else 🙂

I like it when we call 1.92 GHz “low frequency”. It’s important to set new expectations to push single-threaded performance a bit further. Not that long ago it would have been called the “high frequency cluster”.

I expect Huawei to eventually step into notebooks with such a chip, and there the 2+GHz cluster will be more than welcome.

GlobalFoundaries have stopped 7nm development, so I wonder if smaller chips dev, are slowing down?

I doubt smaller chip devs relied on 7nm in their near-term plans to boot.

Will rising costs for each die reduction slow down the move to the next nm. Will we see bolt on oddments like the gigabit RPI, as a way to squeeze more profit out of older SoC in the TV box & sub $100 SBC markets?

It’s expensive. There is slide showing processes and fabs. With each process there are less and less fabs. Currently the bleeding edge fabs: Intel, Samsung, TSMC. There is a clear roadmap for 5nm (impressive density wins here [Quote: “TSMC is touting a 1.8x higher transistor density (~45% area reduction) when compared to the original CLN7FF..”], but lower on performance). 3nm is what is deep R&D right now. With 3nm we also get new transistor structure and probably new/improved materials. After that it’s quite vague. TSMC latest factory for new process will cost up to USD 20 billion. These prices are… Read more »

At 3nm, you will be able to fit one million 8088 on the original die size and I doubt the power usage will be much larger. This should still be faster than any CPU currently built… but limited to 1 MB of RAM, or 1 TB in the best case, but with no shared memory. 640 GB should be enough for anyone 😉

You know how much the ‘Hikey 970’ using the predecessor Kirin 970 costs? That’s 300 bucks so good luck with your 100 bucks target for a more powerful chip 😉

I agree but it is unlikely we will see this chip in a cost-effective board.

I hope there is an RK3399 replacement coming in the form of an OP2 chromebook SOC ordered by Google (this is how the RK3399 / OP1 came along).

From wikipedia: “HiSilicon is a Chinese fabless semiconductor company based in Shenzhen, Guangdong and fully owned by Huawei.”
Why doesn’t market Huawei these chips under their own name? I would say Huawei is a stronger brand name than HiSilicon.

BTW, it just struck me that according to the sd845 comparison:

That is how much faster per clock an A76 is compared to an A75*.

* if we assume the bulk of those figures comes from the big + middle cores.

Indeed. I missed that detail.

And three years later, a perfectly usable chip for a high end SBC / low-end workstation still has no linux and no SBC manufacturer.