ODROID-XU4, and its fanless ODROID-XU4Q sibling, are neat little single board computer packing lots of power into a small form factor. I tested ODROID-XU4 with Ubuntu 18.04 recently and was relatively impressed by how well it worked considering it’s an Arm platform, as there were still admittedly some limitations.

But as they say at $59 a board you can’t beat the price. Except you can actually do, as Hardkernel is offering both ODROID-XU4Q and ODROID-XU4 for just $49 during Black Friday here and there. 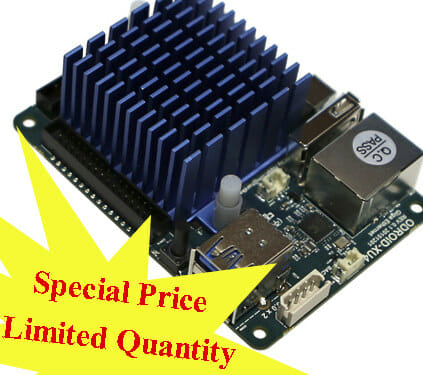 If you’ve already forgotten about the board it is equipped with a Samsung Exynos 5422 octa-core Cortex A15/A7 processor, 2GB RAM, eMMC module support, Gigabit Ethernet, USB 3.0, HDMI 1.4, and more. You can read the full specifications here. The only difference between ODROID-XU4 and ODROID-XU4Q is the latter comes with a large heatsink, while the former is cooled by fan.

If you are currently shopping for Black Friday and/or Cyber Monday, you’ll find more deals on Black Friday 2018 – International deals page which I’ll keep updating in the comments section.

If you still use these boards and buying direct from Hardkernel makes sense for your location. Then they are on sale @ $53 from hardkernel.