When embedded systems companies offer a system-on-module (SoM) and a baseboard, the later is usually open source hardware with all design files provided so that customers can leverage the work for their own baseboard, but files for the SoM are normally not released to customers.

Intel MAX 10 FPGA based Aries SpiderSoM and SpiderBase change that, as the company has decided to release both the module and carrier board KiCAD designs under a CERN OHL v1.2 license. 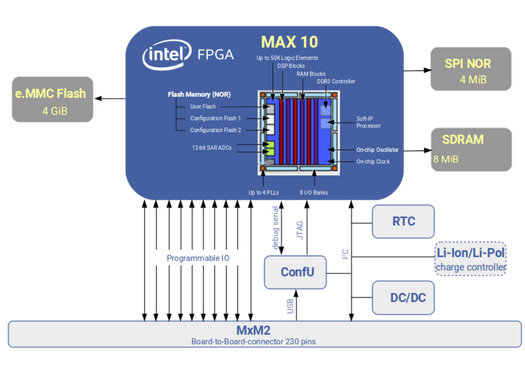 The block diagram above also shows a “ConfU” block for JTAG and serial debugging over  USB that’s implemented through a Microchip PIC16F1454 microcontroller with the USB firmware made available on Github. The company provides support for Ubuntu 16.04 on the host side.

The SpiderSoM is a pin compatible low cost version of their MX10 SoM, and is designed for IoT maker applications instead of professional electronic designs for the MX10. 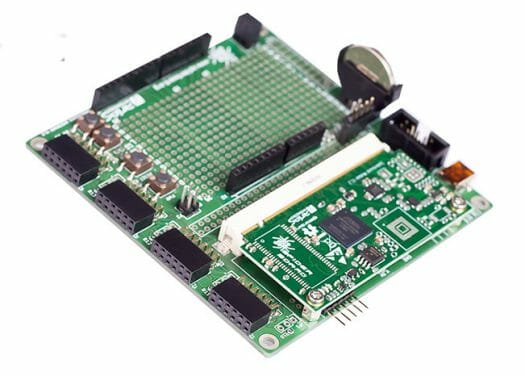 Both SpiderSom and MX10 modules can be fitted to the open source hardware SpiderBase pictured above, and with the following key features:

The solution can be used for various soft-core CPUs, video-processing algorithms, etc… You’ll find all resources for SpiderSoM and SpiderBase, including KiCAD and PDF schematics, PCB layout, BoM, and Gerber on the Wiki. I could not find details about the software side, and how to program the board from an Ubuntu 16.04 computer however. I did find various instructions on the web about installing Quartus Prime Lite on Ubuntu 16.04, so it might be the preferred tools for SpiderSoM too.

Quartus definitely sounds about right. Even though my knowledge about Intel FPGAs originates from the good old Altera times, back at the beginning of this millennium…

Yep, everything Altera is now Intel.